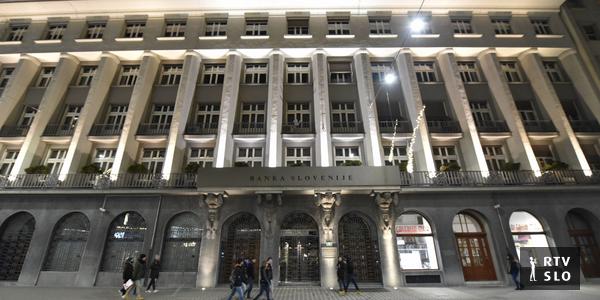 Slovenia's financial system remained stable last year and the first quarter of this year, according to the latest Bank of Slovenia report on financial stability released today.

On macroeconomic risks, Bradeško said today at a press conference in Ljubljana that this is due to slightly lower economic growth in Slovenia, and even more so in increasing the range of negative scenarios in the international environment. "The banking system operates under conditions of economic downturn, economic growth is declining in both Slovenia and the euro area, also in our main trading partners"said the director of the Financial Department and Financial Stability macroprudential politics Tomaž Košak.

Risks of the international environment
Such risks put the Slovenian banking system at the forefront of the challenge of creating stable revenues under such conditions. "In particular, if the low interest period continues,"said Košak.

Risks to the financial system stemming from the international environment could slow Slovenia's economic growth, and the demand for corporate and domestic loans could also be reduced. This would increase the risk of income in banks and would also increase credit the central bank wrote in the report.

Filling a Real Estate Balloon
Bradeško also drew attention to the risks arising from the real estate market for Slovenian banks. The rise in residential property prices has been high for a long time, especially in Ljubljana and Koper. After being ten percent in 2017, it was already over 18 percent last year and therefore the largest among the euro area countries.

This growth was mainly due to the imbalance between supply and demand in the market, and not to the financial factors themselves, explained the two. In particular, the banking system is now significantly less exposed to risks in the real estate market than before the financial crisis, and housing lending growth is considerably more moderate. Today, the banking sector is significantly less exposed to the construction industry. Although prices in the real estate market are still not overestimated, Košak believes that the continuation of this dynamic of price growth will inevitably take place.

If, on the other hand, there was a significant decline in prices in the residential real estate market, the value of guarantees on real estate received would decrease in the banks, which in the event of a simultaneous deterioration of the economic situation could lead to an increase in unemployment, the probability of non-payment of loans.

Growth of consumer credit
The growth momentum of bank lending was the highest in consumer lending, and in March it surpassed 12%. At the same time, banks receive longer maturities of consumer loans, some for more than nine years. In Slovenia, more than 80% of all consumer loans are over five years old, while in other parts of the euro the percentage is less than 50%. The growth of loans to companies, however, was significantly lower, in March it was 3.5%, which, according to Kosko, is also a result of favorable business results.

As a third risk to the Slovenian financial system, the Bank of Slovenia exposes the risk of income. "This remains despite the banks' high profits in 2018 in the medium term, one of the most important risks,"said Bradeško. Similarly, banks in all low-interest countries face similar risks.

The challenge of generating steady revenue
For the banking system, in the future, the challenge will be to generate stable revenues at low interest rates. In 2018, the banking system operated with high profits, but net interest margin and net interest income growth were extremely low, Košak noted. Gross profit, which was even higher than before the crisis of 531 million euros, was also the result of the net release of impairments and provisions.

Quality credit the portfolio is improving, while Košak appears to be important for banks to continue the process of solving bad loans now, when economic conditions are still favorable. "With the deterioration of economic conditions, this process will be slower and the cost of restructuring these loans will be greater. " Košak warned. As regards the capital adequacy of the Slovenian banking system, the Bank of Slovenia estimates that it is adequate and similar to that of the euro area.