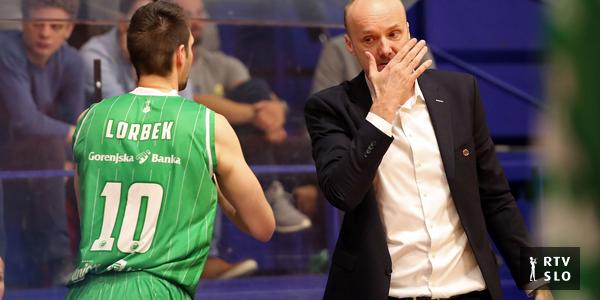 The first shooter was Marjan Cakarun with 17 points (14 in the second half). Markan Mark Šiško has added 16 points (from 7/10) to 12 points. In Novo mesto, the game began with a minute of silence in memory of coach Andrej Petrič, who died at the age of 80, while fans of Krka still had no reason to be happy. Sixta basketball players (the 14th consecutive win in the New KBM League!) Were extremely accurate on the three-point target; in the first half, nine triples were scored in 13 attempts, and their goal was traced behind the 13/23 line. When he scored 20 points at the start of the last quarter, the rivals (Balažič: 16 points) did not have the right answer …

Golemac: Nothing is over, so it's not time for euphoria
"Congratulations to the fantastic for the excellent semi-finals. We also show great concentration in Novo mesto. I think we were in a better competitive shape and had more players at our disposal than Krka. We also use that. On Saturday, we begin the finals, before which we have enough time to rest and prepare well. Nothing is over, there is still much work ahead. Boys who are not euphoric are well aware of this"said Jurica Golemac, coach of Sixt Primorje.

Petrov: This way, you can not just play
Of course, Krka coach Simon Petrov was not satisfied:The shore was again much better. We played very hard on the defense, we did not explore small personal mistakes and we were too weak in defense. 52 points scored in the first half were too much. We had problems with injured and sick players and maybe this also affected our defense game, but this way we can not just play. They took advantage of everything they could, were very worried, you took advantage and we could not go back. I hoped we could show a better game, but we did not succeed and in the next few days we'll analyze why this was the case"

Helios reached 21 points in the second half
Petrol Olimpija (without Luka Šamanić), who struggled with Šenčur in the quarter-finals, won the semi-finals as well as Sixt Primorska with a 2: 0 win. In Domzale, Helios defeated 49:68 after allowing the rivals only 21 points in the second half. Domen Lorbek scored 17 points (7/13) for the first shooter, Marvin Jones scored 15 points and seven rebounds.

Partial score 20: 0 for the win
Olimpija started poorly in the first quarter, she scored just three points of the game. Until 37:37 at the end of the 28th minute, it was still tight, so Helios did not reach the point by eight minutes, and Olimpija went very far in the 0:20 result. Helios tried unsuccessfully to take a triple turn (at the end of 4/23), especially Miroslav Pašajlić (4 points) was unavailable.

The final will start on Saturday, the first match will be in Koper. In the series of three wins will be in the role of the favorite Sixt Primorska.

The result of the victories is bold. They played two wins.