PHOTO: The first confrontation between Jankovic and Logar with the complaints about the banking hole 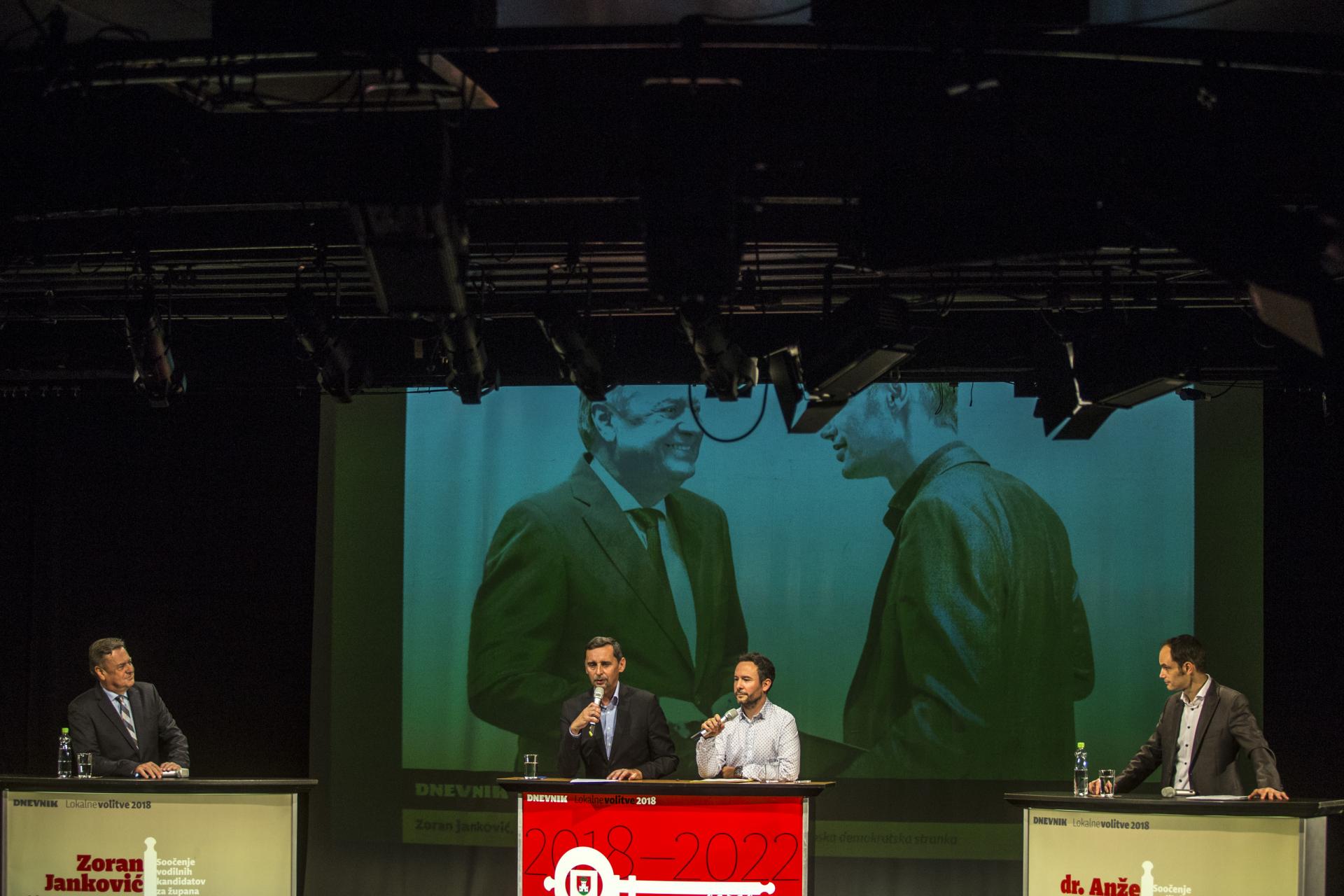 Ljubljana – We will go to the local elections in less than two weeks, but the clashes between the candidates have not even begun. The first among the main suitors for the management of the capital was held at the Puppet Theater organized by the daily Dnevnik.

According to his last survey of the end of October, he would be for the current mayor Zoran Jankovic, who was in office for the fourth term – over a period of several months, he was given a state policy and, with his party, Pozitivna Slovenija was celebrated in the elections – 59.1% of the respondents voted. With 18.2% of the votes cast Anže Logar, Member and the third mandate municipal councilor in the SDS list. As the survey was done on a very small sample, it is not an election announcement.

Interview with Anže Logar: "I know what Ljubljana expects, needs and what it can achieve"

Interview with Zoran Jankovic: The role of the mayor is equal to the role of the director. A vision, strategy and goals must be established

Initially, the candidates presented themselves; Logar emphasized his dedication to the assigned tasks, Jankovic his team and carried out more than 2000 projects. Logar did not want to evaluate his counterpart because he wanted to dedicate himself to the program: "I bet on the program, the priorities and the concerns in doing so." However, he said he was not in favor of the personality cult, which was a rival, current mayor, and was surprised and interested in what SDS president Janez Janša is thinking, who has presided over the party since independence.

Janković complains that his mayor's midst has been able to reject the story and said: "You're so superbly talking about the glamor of the street, which, in fact, does not have the right weight.We are the only one in Europe that closed the city center for all traffic, "he boasted and added an increase in the number of people connected to the sewer system – in the last ten years the share has increased from 68 to 88%, in the next two years it will increase to 98%, he announced. He also mentioned the sports park of Stožice, for which € 114 million was deducted from the budget, which resulted in him receiving € 3 million less.

In the meantime, Logar explained his pre-election slogan Let's get Ljubljana, which Jankovic characterized as an insult, since in the latter terms they restored all health homes in Ljubljana, while the building is an extension of Dom Bežigrajski and the renovation of Metelkova. Logar said the city is responsible for the primary health level and that the law does not prevent it from using any means to help shorten queues such as dentistry, physical therapy and gynecology where there are bottlenecks. I myself would be looking for health services in the market, and Jankovic replied that the counter candidate had mixed functions and that this was not possible.

There were a few sharp words among the candidates; Jankovic accused Logar of voting in the National Assembly for the deprivation of 57 million euros in the capital, while Logar returned with the words he made for the 60 million euros in a bank hole. "Zoran Jankovic is not obliged to anyone, I have not signed a contract alone, the bank is guilty," was heard.

Applicants agreed that responsibility for the main bus and train station, which examines the city's reputation, is state-owned. While Logar claimed that the 12-year-old protester did nothing for traffic arrangements, Janković said, among other things, that the number of passenger traffic users was growing, forming a traffic pattern, intelligent intersections, increasing the number of lanes , completing Fabiani's inner ring. a new road from Styria.

"People need to get on public transport, which will only be successful if it's effective." If anyone still insists on driving, then he can charge a more expensive parking lot, "Logar said.

Competitors have a completely different view of citizen participation, for example the introduction of a participatory budget. Logar predicts it, since she thinks the community is important in deciding which projects she gives money to. "People are better able to decide where to put the crippled police, which sidewalk, school or kindergarten to restore, where to do the bike lane," he believes.

Jankovic drew attention to the difference between "someone who sells theory and those who deal with business affairs", that he thought of himself, and stressed that the city already had such a budget, since everything works according to the wishes of citizens. In addition, every three months it is welcomed with representatives of local communities.

They also talked about access to housing in the capital, to which citizens come by lot. Janković acknowledged that this issue is tragic, but they are more likely to share lots by lot than faculty estimates, and that five years ago they have worked hard for the municipal real estate fund to borrow 50% of the capital and build a residential area.

Logar, he said, rather than the large oversized neighborhoods, built by private capital, is committed to increasing the housing fund through municipal construction.

While Jankovic announced that he does not have a special program for the next term, as his work speaks for itself, Logar, among other things, announces to Ljubljana that there is no corruption and traffic jams, technological progress, the introduction of a participatory budget and the construction of a city hospital. Even if the city's health policy is one of its priorities.

The current mayor had to defend himself against allegations of abuse of the situation and money laundering that occurred, while others were still going on in court. "Unlike others, I believe in the judiciary, the prosecution and the police," he tried to challenge the opponent and explained that the court upheld the court in his favor. Three other Stožice cases were opened, one with the Gratel donation from Ljubljana Castle and the sale of Mercator and Electe shares fourteen years ago.

Janković was born in 1953. He spent his first years in Serbia, then came to Slovenia, where he attended the Faculty of Economics, as well as primary and secondary schools. He started his career at Pošta Slovenije, and later worked for Grič Zagreb, Mercator Invest, Emona and for eight years as chairman of Mercator's management. So they were solved unconditionally. In the meantime, he mounted Electa, which he left for his children. For eight years, he led the handball team and in 2002 became the manager of the year after the selection of the Manager Association.

Twelve years ago he was 63% elected to the mayor of Ljubljana for the first time, which he managed to repeat in the next three elections. Meanwhile, with his party, Slovenia Positive won in the parliamentary elections, but the government failed to compile it, so he returned to run for mayor. Prior to the parliamentary elections this year, Desus was supported, but the party, however, reduced the number of seats in the National Assembly by half.

He has extensive political experience: the second mandate is a member of the SDS quota, he is the chairman of the LSD Council of Ljubljana, he also worked in the Ministry of Foreign Affairs, Government Office for Communication, Government Office for Development and European Affairs and consultant to the parliamentary group. EPP-ED in the European Parliament. He also served as product manager in the marketing department of SKB Bank.

In 2007, the then president of Lithuania granted him a state recognition on merit in resolving a Lithuanian citizen from drowning.

Another 8 candidates, including Marko Koprivc (SD), Dragan Matic (SMC) and Milan Jakopovic (Levica), are also in charge of running the capital.