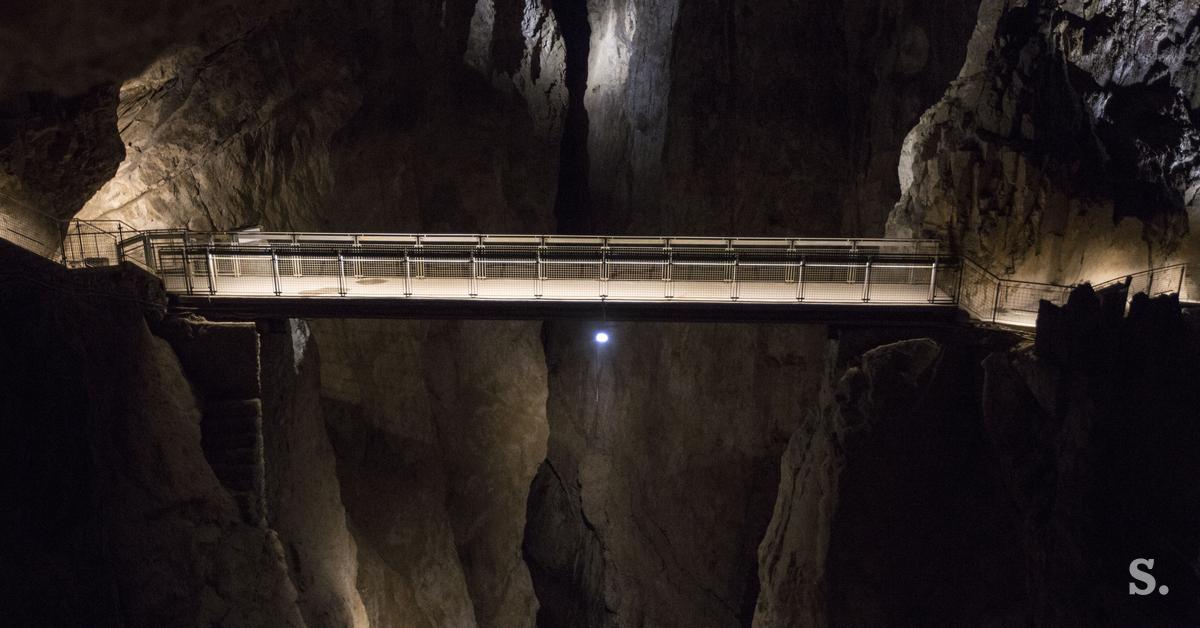 After a year of work and exploration through the ceiling of the highest Martel Hall in Škocjan Caves, the caves Luka Biščak, Albert Ličan and Jaka Jakofčič penetrated new ranges, about 70 to 80 meters above the current bed of the Rijeka River. The mentioned trenches, which are 30 to 50 meters high and wide, represent the old bed of the river Reka.

This discovery, and above all the advancement in the ceiling of the Martel Hall, is very important because it will now be possible to study the Rijeka River gently at high water levels and in particular its mysterious flow in the depths of the karst world.


Where on a trip, when does it rain? Underground!

The trenches found on the floor of Marten Hall are not visible. These are the so-called fossil trenches, which in high water level contribute strongly to the water flow of Škocjan Caves. This is indicated by numerous recent deposits in the found trenches, especially wood and, unfortunately, plastic bottles, of Škocjan Caves Park. In addition to the possibility of further exploration, this discovery also extended the Škocjan Caves.
Photo: Matej Leskovšek


The reason for the 58 campaigns was the climbing of the western canyon wall, the Reka River to the ceiling of the Martel Hall, which was Luka Biščak с соплазелцами Borut Loze in Iztok Cencic reached on July 4, 2017. In the following climbing campaigns, Biščak and Cencic discovered the breathing device on the ceiling of the hall, from which the bull is strong, which indicated the connection with the outside world.


Weekend idea: trips that will refresh you

Martel Hall is now accessible every day of the year

Now, after Biščak, Ličan and Jakofčič, after the preliminary location of the air suppressor according to the rising line in the hall, it was now possible to reach the ceiling of the Martel Hall from the upper side. This means that Martel Hall is now accessible every day of the year, not only during periods of drought, when the water level drops significantly, as the current path along the canyon is three times crossing the Reko River.

The hall mentioned in Škocjan Caves, with 2.2 million cubic meters of volume, is considered the largest underground hall in Europe. It is located at the end of the caves and until now was only accessible after a dangerous, closed route for visitors, through the canyon of Škocjan caves.

More on the discovery, which, in addition to the possibility of further exploration, also extended the Škocjan caves, speleologists told the researchers at the Tuesday press conference. Until the discovery, speleologists arrived precisely the year they celebrated the 200th anniversary of their visit to Škocjan Cave Park.