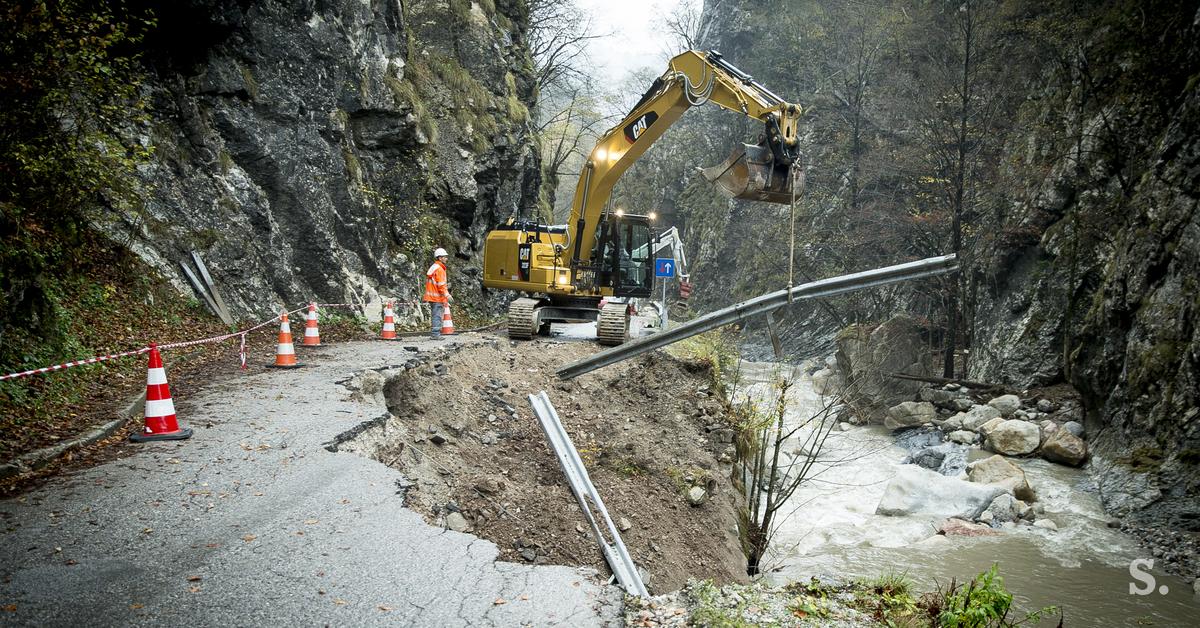 On the road from Tržič to Jelendol, workers are continuing to rehabilitate the biggest landslides, caused a week ago by Tržič Bistrica der. They are trying to ensure the transportability of the route that can only be walked on the road as fast as possible. Today, two elementary school students left Jelendol for Tržič.

Due to the fact that water has taken several parts of the road, the arrival in Trzic for the inhabitants of Jelendol and Dolina is an organizational bite. The shortest part of the route above the tunnel near the Dovžan Gorge is not transported due to the plains, but workers have already assured on Sunday that at least walking was usually transient.

Thus, as on Monday, the inhabitants of Jelendol and the valleys, recently cut off from the world by the recent shortage of water, were taken to Tržič for work and after work.


"The man who works from home took us to the curve before the tunnel, where we traveled part of the way, and then continued the road to service with a rental car," explained one of Dolina's inhabitants, who along with his son left this morning. job.

Similarly, with two cars, one above the tunnel and the other below, they also help Jelendol's mother and daughter, who are going to work in Podnart. Mother, by her easy organization, has had relatives in the last few days.


For the first time in a week, a pensioner from Jelendol left for Trst in Trzic. This was aided by firefighters who take care of the morning and afternoon transportation. According to Jelendol Mitja Meglič's firefighter, three transports occur in the morning and in the afternoon, while the road is closed, so that intervention work can take place.


Many residents were able to organize a holiday in the

Many people have been able to get a vacation on the service and can stay for a while, at home, on the first day of school after the holidays.

"We decided not to go to school yet, because the route is very dangerous for them," Meglič explained. Nowadays, two of the seven primary school pupils have attended school due to a medical examination.

As the head of Trizi Primary School, Stanislav Grum, explained, they agreed with the parents that the children of Jelendol will be home for three days after the autumn holidays, while on Thursday, when the situation is normalized, they would go to school. He is convinced that children will easily compensate for the missing substance. Teachers and classmates will help you. 
They would also have photocopies of the substance if their parents wanted it, but parents do not have time to deal with it. Students now have difficult times, so we will not overload them with didactic material. When they come to school, they will get everything they need for more lessons, "Grum said.


Drava is flooding, but the worst we've missed is #photo #video


The biggest problem remains the path to Tržič

The inhabitants of Jelendol also had a lot of work at home. Some houses poured water and brought sand and mud with them. With mechanization, villagers began to remove large rocks and regulate the infrastructure, so things are normalizing, Meglic said, noting that the biggest problem remains the road to Tržič, virtually destroyed, and the biggest obstacle to transportability are two large used. 
"We could not do it in the valley, but they took good care of us, provided food and everything," said one of the residents, remembering the night of October 29 to October 30, when the stumbling block was cut from the world.

"It was a pure theme, we were out of electricity, we heard the thunder and thunder of the water, and we just waited until morning to see what it would be," she explained.

Meglič pointed out that in the upper part of the village they did not know that the lower part of the water was watered, and because of broken links they could not even call anyone until they crossed the forest to the fireman's house to establish a connection with Tržič and reported what a life.