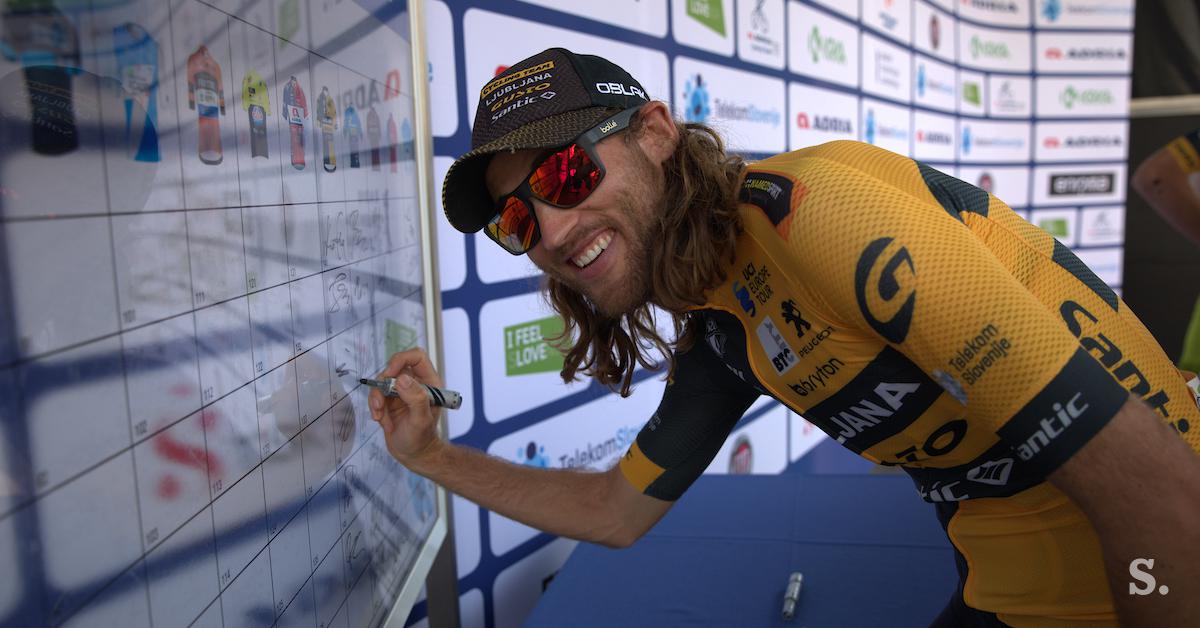 In the announcement of our conversation, you will run the race pedals in Slovenia. Is that a big psychological burden for you or something that you were very happy about? For example, you did not show up last year in the Slovenian race, but in the Ljubljana team, Gusto Santic was in charge of recording and editing videos of the race.

It's true that last year I was part of the follow-up team, this year I will be among the drivers, which is a great progress for me. I'm anxious, but at the same time I'm scared.

It is well known that, since adolescence, you have anxiety and depression. How does this reflect in everyday life? In the morning, can you tell us what your day will be?

Usually this is how my malaise lasts for a long time and then it really is not pleasant on my skin.

I met for the first time in 19 years with anxiety and episodes of depression. For the next six years, I felt as if I were standing on the edge of the cliff and waited all the time that my solo was lifted. That's how I felt every second for six years. As if I were going to die, but at the same time there was no reason for it. Terrible, really.

Timothy Guy explains why his experience of feeling anxiety and depression can help others:

I tried it somehow for two years, I insisted on the bike and I had a relationship with the then girl, but when I got to the point of just not being able to get more, at some point I dropped everything from my hands to what I believed trigger my feelings slanderous

Of course, nothing has changed in my life. Wherever I went, I felt the same despair. We were traveling with our brother, but there was nothing different. I visited some of the most beautiful places in the world, but at the same time I did not feel any of it. I was completely melted.

Who could you call who you then bent over?

It took me a little while to get help. It was only when my father told me that he had prostate cancer and that he had stayed with two more years of his life. I remember feeling nothing at the time.

I was not shocked or unhappy, I just did not feel anything. At the time, I realized that something was wrong. I loved my father, of course, with these terrible news, I should have felt somehow. I was looking for help then.

I tried my best, I changed various types of medications. The problem with medication is that it takes some time until you find out whether it is appropriate or not and have side effects. It is difficult to find a true cocktail of remedies.

Why did you decide to go back to the cycling world? I imagine the race is going through extremely stressful times that can not really affect your mental health well.

I feel bad at all times and why not do at least what I like the most in the world? 
The first steps on the bike were really scary. I was afraid of death. My return started very slowly … It was difficult for me the first few days to wear the shirt, sit on the bike and jump from the garage to the driveway, which is only a few meters away, and go back. That's all I could do.

It was also difficult because I knew I would never be a top level rider, as I wanted to.

At the time of my return, my assistant was very helpful. At first, we agreed that I would not participate in races, but would only ride a bike. I just wanted cycling to be a part of my life again.

In the meantime, have you experienced a bright flash of hope?

Not even, but I constantly cling to the hope that my situation will change for the better, so that I can live full again. Although, on the other hand, I did not believe … I do not know if that makes sense, but it was so.

What has been your hope, however, that your well-being will return once again to the best?

It was also that they called me the Australian team, or I would run for them, and even if I explained to them that I did not even know if I was still able to run, it gave me hope.

The first year I introduced myself in several races, but it was difficult because I only watched them because I faced them, not to get good results there.

In addition to the training, I worked as a teacher and trained so much that I took the bike to work and returned, 20 kilometers a day … In 2016, he won the 4th stage of the race for the Philippines.
Photo: personal archive


But you did not give up. Do not you think you'd rather go to school?

Yes, in fact, the problem was that I did not look forward to my role as a teacher and because I would not rather do something close to me, that is, I would ride my bike.

I also worked for some time as a mechanic and maybe I found myself in it, of course, if you did not want to ride a bike.

Cycling is something for me to try to control my mental state; on the other hand, I think this is the most challenging sport in the world. Of course, it would have been easier for me to be a teacher or a mechanic, but that would mean that I chose an easier path.

So I chose the heaviest, I moved to Slovenia, I traveled the world … Many think that all this is dreaming, but of course not.

I think it would be for me to learn to deal with my anxiety the better. Also, I try to inspire others with my story.

When I was struggling with these anxious feelings, all I really wanted was to find someone who was in a situation similar to me in a story that has not yet had a happy ending. Because? Because I always felt even more lonely and even more terrible when I spoke with a happy ending. Of course I envied them … They got something I did not have yet.

My goal is to tell my story in the most sincere version, I hide nothing … 
When did you speak publicly about your story for the first time?

I think in 2011, the first thing I did was write an article for our local newspaper.

What was the answer?

Very positive. When I shared my story, I never experienced anything but a positive response.

One of the great advances in this way was my speech before the group of 150 students that I taught. The experience was really very inspiring. These teens did not know anything about my private life before, but I was completely exposed to them in the lecture.

The answer was remarkable. Some of these children came up to me, tears in their eyes, they confessed, admitted that they were happening to them in a similar way. Some parents also came to my aid. At that time, I wanted what I was doing to get my name – I decided to start a startup company called HeadCrack, which aims to raise public awareness of mental problems.

It really had to be stressful.

So why are you doing this?

Because I want my life to make sense. If it is already bad for me, why not help at least a bit to help others?


When I look at you like this … Smiling, cute. Of course, no one would have realized that something so bad was happening around his head. It can be easy to hide it.

You could. I was lucky that it was so bad that I simply did not have anything else to seek help. Because? Because many people are struggling, maybe not the way I am, and therefore never seek help. Especially men.

Being able to talk about my story makes my bike even more meaningful. But I'm not happy about it.

When was the last time you felt completely relieved?

I do not know, this year I had some brilliant moments, but I'm still far from happiness.

Do you know what leads you to these moments?

Sometimes I know better how to control my condition. If I look back and remember six horrible years, I still feel much better today than I did back then.

I moved to Europe, I ran for the Slovenian team, whose co-founder I am competing in the race in Slovenia. These are great turning points for me. Besides, I'm studying psychology.

One of my main goals was to be able to drive all season in Europe. Last year, I did not, in fact, because of a complication with medications, I had a very bad season, I may be going for this year. 
One of the leading men in his Slovenian history is Tomaž Poljanec, director of the Ljubljana team, Gusto Santic. How did you meet her?

We met on my previous team, the Thai team Attache Team Gusto, where Tomaž was the director. We immediately establish a very genuine contact. Years ago, when I was completely in the background, I even traveled to Slovenia and trained here under his supervision.

Already then, we started talking about setting up our own team, and then joined the Taiwanese wheeler Gusto, the club barge with the wheels and my company start-up HeadCrack. Tomaž still sees some value in me, and that means a lot to me.

For me, cycling is a polygon, in which I try to relax as much as possible at a very high level of stress.

In this I see a parallel with life. With all this stress and anxiety, I try to relax as much as possible. I think cycling and mental illness are very good together. In both, these are constant adjustments.

You also invested all your savings in the team (30 thousand euros).

It is true that we were looking for another sponsor with Tomaz, and when he suggested that we would not find him, I proposed to contribute my share. Otherwise, I should have to go to another team. But I really enjoyed staying in Slovenia.

Also to raise awareness about mental illness. In Slovenia, you have one of the highest suicide rates in the world, so it seems to me that public awareness in this area is even more important. Especially among young cyclists. Many after the end of their careers are faced with very great anguish.

I visited Slovenia for the first time in 2016 with the Thai team that I was flying. Tomaz invited us, but I stayed here for six weeks and enjoyed it.

Next time I visited Slovenia for three months. That's when I decided to live here. I knew it would be difficult everywhere, but in Slovenia I felt good manageable. I saw that you care about nature so you can communicate in English. I live in Tacen, in our team's club, along with two other cyclists.

Guy race impressions According to Slovenia and his problems, he publishes every day on Facebook:

Have you ever wondered how this affects strangers in Slovenia? In the section Foreigners in Slovenia, every week we introduce someone who has brought our country to life to tell us how it is here, whether Slovenes are open to newcomers, what was the first laugh at the beginning, or what did Slovenia like, what kind This is where you come from. Do you also have a wife, a neighbor, a colleague, an acquaintance from abroad? You are welcome to submit your suggestions to [email protected]