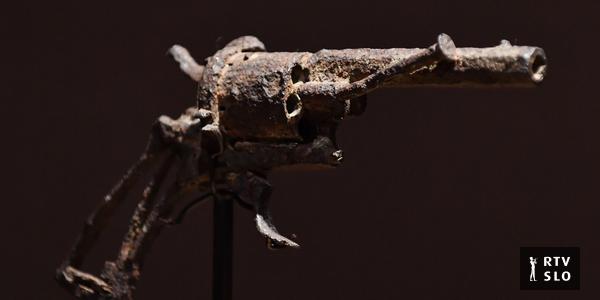 Vincent van Gogh is accused of committing suicide near the French village of Auvers-sur-Oise, north of Paris, where he spent the last months of his life in 1890. The weapon was to be borrowed from the owner of the guesthouse where he lived and thrown with it in the stomach. The wounded returned to the inn and died 36 hours after the shooting.

This should not be the first artist's dramatic self-destructive experiment. Two years earlier, he cut his ear and donated it to the prostitute in the town of Arles in southern France.

According to the AFP news agency, the auction house admits that it can not confirm with certainty that it is a weapon that killed the painter. The investigation confirmed that firearms were underground allegedly 75 years ago. In addition, the caliber of the missile that was taken from van Gogh is the same as the revolver.

In recent years, suicide is in question
Most historians agree that Van Gogh himself has killed himself, and recently there are theories that impose a fatal shot on the boys who played with the gun in the field. This theory is also presented in a new biopic In the Gate of Eternity z Willem Dafoe in the lead role.

The film was directed by a renowned American painter Julian Schnabel, and wrote the script along with a famous screenwriter Jean-Claude Carrier. According to Schnabal's words, with which Carriere agrees, van Gogh should have been at a very difficult time chasing suicidal thoughts because during his stay in the village of Auvers-sur-Oise in 80 days he created 75 images on canvas.