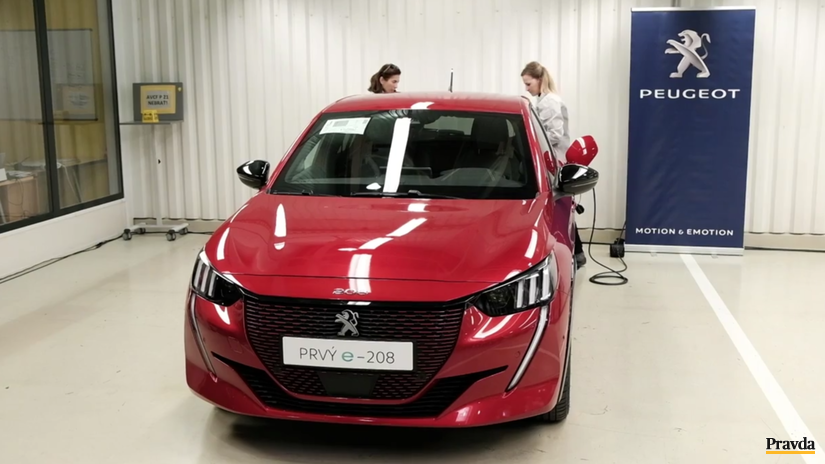 Workers lined up in smaller groups around a tension belt await the arrival of a red body. It is she who will have her first marriage with a chassis containing an electric battery instead of a gasoline or diesel tank.

VIDEO: See the news appearance of Trnava and also as Trnava
Fabrike is in production.

"Marriage is a common term in the automotive industry
chassis and bodywork, "explained Peter Švec, a spokesman for PSA Peugeot Citroën
Slovakia. This term is also used by German, British and German officials
Korean carmakers operating in Slovakia. Body connection
with chassis is the most important event of the assembly process and in contrast
have to last a lifetime to join two people
car.

Huge robots connect two basic parts of the vehicle, pull a pair of bolts
and the first historic Peugeot 208 pure electric for the first group
workers. "Despite the high level of automation, people need to be sure
check the tightening of the machines by hand. We only rely on machines after
about 300 vehicles, "said Rastislav Matiaško,
responsible for the design of the new model at PSA Peugeot Citroën Slovakia.

The production of cars in the factory of the French automobile factory in Trnava is typical
making all models of cars in a belt
with a variety of power units. They are currently personal motorized vehicles
Citroën C3 and Peugeot 208. But the Peugeot 208 also has a version
with a pure electric motor.

After the production line of the automaker Trnava, only the body remained for many years
designed to be connected to bogies containing diesel and gasoline tanks. for
3 million people left the factory for almost 13 years
cars that have been designed for customers from 60 different countries
world. "The production of a purely electric vehicle is a big step forward for us.
This year, the challenge is to master the production of a new
the Peugeot 208, which will provide us with production for several years
forward, "Svec said. Especially in Western Europe they are for high taxes
very popular smaller passenger cars.

Brussels is struggling to cut emissions from car manufacturers under the threat of high
fines. Even in Slovakia in 2025 zero-production vehicles
the emissions account for 15% of the cars sold and this index is up to one year
2030 will increase to 30%. "There is no change in internal combustion engines
carbon dioxide emissions to the level required in Brussels,
Therefore, today all automotive concerns support the production of
vehicles, "said the director of HR of PSA Peugeot Citroën Slovakia
Ľubomír Kollár. The PSA itself plans to produce all by 2025
a car with a purely electric drive.

The electric version of the new Peugeot 208 will enter the European market
probably in the second half of this year. The price of the official car so far
was not published, but according to the French magazine L & # 39; Argus
should be about 31 thousand euros. For the high price, they should be just new
electrical propulsion technologies that allow the vehicle to operate at a
340 km and the battery capacity itself is 50 kWh. Very polite
the reach of the car is drastically reduced, especially in the winter, after the heater is switched on
in traffic. The battery will be charged 80 percent in half an hour
when using a 100 kW charging station. In case
Using a regular network will increase the time to eight hours. People walking
in the city, the car can be fully charged at night without problems
parking.

However, experts regard electric cars as a temporary matter.
The generation of electricity in coal-fired power plants is
environmental problems will cause the environment
store millions of electric batteries. According to the people of the car
The industry is therefore the future of hydrogen propulsion, which after refueling
turns into electricity in the vehicle. Such drive technologies
should be available for about seven years.