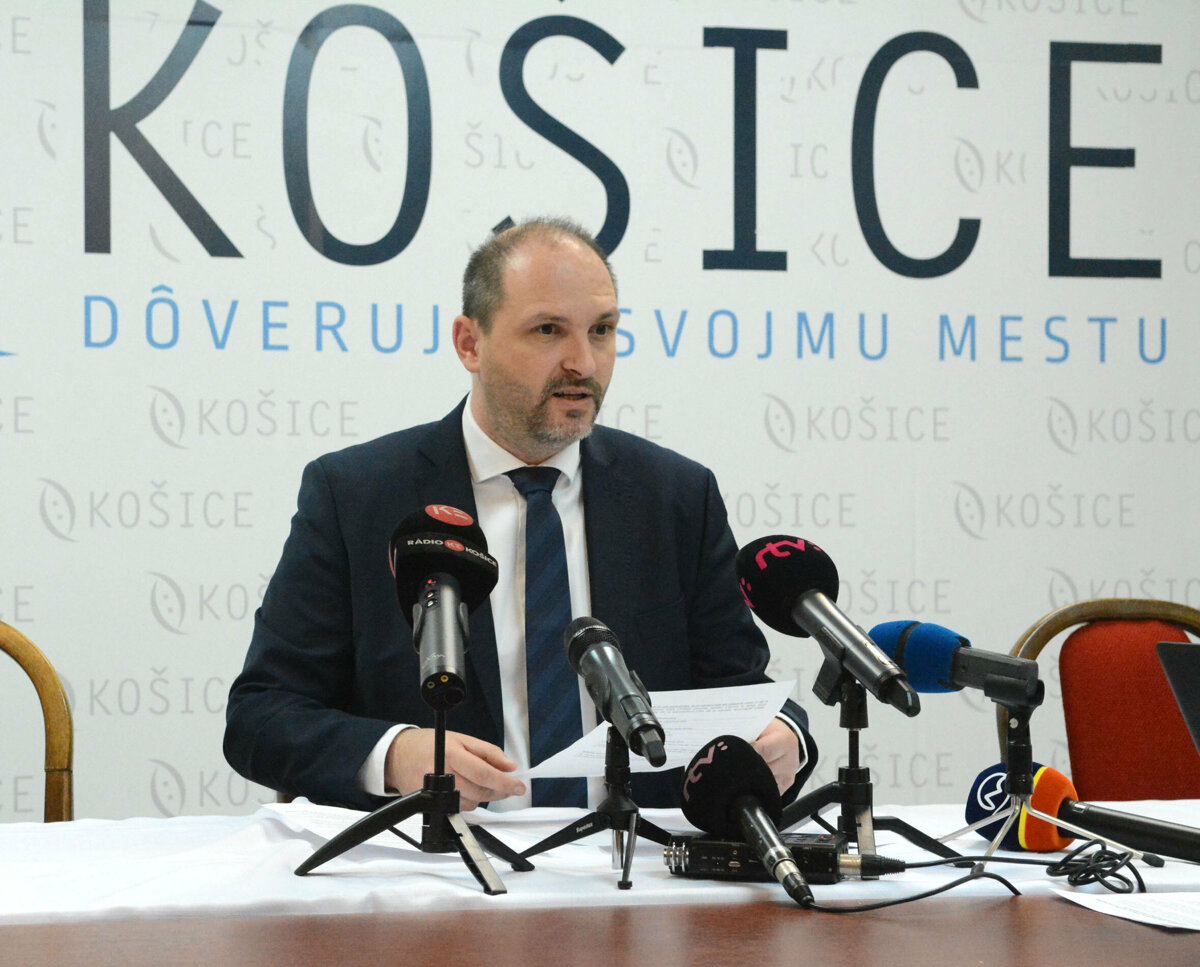 He likes the ISS tracking, more disappointed by the unfavorable state of urban enterprises.

Kosice. Mayor Jaroslav Polaček (independent, with the support of the opposition parties) on Tuesday, his first 100 days of government with journalists and the public in the almost complete Hlavná prefecture.

According to the municipality, he made it as the first politician in the history of self-government in eastern Slovakia.

Polaček took over the mayor's pledge on December 10, 2018, and from the early days he began working on his vision of "Košice Functioning" which is supported by club deputies and club activists and independent on the city council.

The main benefits of its first hundred days ahead of the city were the adoption of the city's budget, the renovation of the choice of parking by the city, the reform of the City Police of Košice, a new way of communicating with the media and the public, the management of companies and municipal institutions and the installation of a new system of sports recovery. infrastructure.

Polaček: We put twice as much in road repairs

The priority for the city's new leadership was to approve the city's budget, which fully reflects its pre-election promises. It became the city council of January.

Budgetary stability will be a crucial criterion for the entire electoral period. Put simply, how much will be invested in the budget chapter.

An example might be a tax on dogs. All anticipated income from this tax has been distributed to the districts and organizations of the city that care for abandoned and stray animals.

This year, double funding was earmarked for repairing local roads, such as in the past and for sports, which the city has supported in 1 million euros in 2018, this year will be € 1.4 million more.

"We started working on a comprehensive audit of public procurement, not only at City Hall but also at municipal companies. We want to establish internal control so that public finances are effectively managed. I can already say that we can save at least 2 million euros per year on small purchases with new systems, which will be budget revenue and investment in urban development, "concludes the mayor.

Just for the parking, he is pleased to have won the election

From the mayor's point of view, it is good that the city has taken over the ERA parking system at the beginning of the year. According to him, this topic has resonated strongly in the public before the elections and now.

"I am very pleased that the parking money, which in my opinion, in the past, was for politicians who were hiding behind a private company, is already flowing into the city cashier.These will be invested in the development of Košice, road repairs , decks, parking areas, "he said. 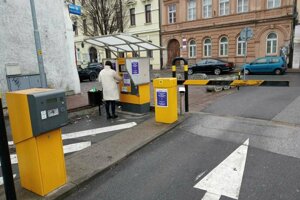 
Proof that the city of Kosice has won in this case is, according to him, parking machines wrapped in black aluminum foil.

"It was not easy, but we promised to solve it as one of the first things," said the mayor, "for years we were robbed by a group of unpleasant politicians.

He recalled that many did not trust them before the elections and were skeptical that they could do so. He is very pleased that they were wrong.

However, he is aware that they are not yet at the end of the parking case.

"I want to ask Kosice for patience. It is necessary to take as is – if I want to park in the center of the city and its surroundings, I simply have to use one of the payment methods currently in operation. "

The mayor personally thinks critics are just a small group of people who are just looking for ways to do something.

City policemen will not only give slippers and fines

Changes in the workings of the city police have also begun in recent weeks. Its members should not only charge fines and distribute slippers, as many Kosice people have set so far.

On the contrary, their priority should be to fight small offenses, to improve street safety and to eliminate so many harassments criticized by misfits, especially in the city center.

"We are pushing for reform of the municipal police operation to ensure that city police also protect security and cleanliness. City cops will be in the field. They will keep an eye on the order not of cars, but as pedestrian or bicycle rides to move between residents. So do not sit behind the computer keyboard. We will also intensify their work directly in housing developments, "said Polaček.

Since the beginning of April, the so-called. enviropolita, in which twenty policemen of the city already specially trained will operate. They will focus on controlling buildings, waste and cleaning in the city, as well as other specializations.

"They will be a support for our construction authorities, they can document all construction offenses so that their staff can do their job and at the same time get the city's police bases to make them more effective," said the mayor.

He also said that a gradual reform would pass through the entire county.

Since April 1, the Audit and Control Department has been created as a prerequisite for its promised anti-corruption audit.

Kosice wants to be a true sport city

After the controversial abolition of the European Youth Olympic Festival (EYOF) in 2021 by the city council, according to the mayor, Kosovo has truly become a city of sport by approving the "Action Plan for the Development of Sports Infrastructure". 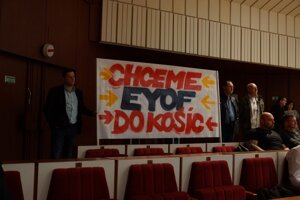 
"We have approved 10 million euros for the construction and reconstruction of sports facilities. It is worth investing only in a sports stand that is multifunctional and can also be used for recreational or youth sports. My priority is to build a new football stadium, just like the National Tennis Center. But everything has to be done without overpriced solutions, and especially no commissions, as I promised in my election program. That is why we are working on a better and more functional concept of sport, "he emphasized.

After the decision to cancel the EYOF in Kosice, according to the mayor, there are two fields – negative and positive.

"I'm trying to look at it positively, because the city of Kosice certainly will not incur debts and other possible problems related to the organization of the Olympics in the future. On the other hand, we are ready and able to build all the sports stands as they belong to a metropolitan city. "

He will also do his best to build the NTC after finding the right location.

"On the other hand, I do not think we need a bracket that incorporates luxurious, world-class elements such as a special quick-release roof or exclusive air-conditioning units. We can do it at European level for a third of the price, "he said, unhappy with the estimated $ 10 million from the original $ 10 million.

He also considers 19 million euros for the football stadium.

"We're going to have to do a test, but that does not mean we're stopping it. This will be done alongside that," he said.

He also confirmed one of his most discussed pre-election promises – building a water park. However, he did not want to say anything more specific to him, justifying, for example, that non-citizens would not hinder its implementation.

Immediately after taking office, Polaček implemented some measures of the system in communication with the public.

By amending the Regulation, residents have the opportunity to speak at a regular session of the city council. He can also meet you personally every other Friday.

The whole new thing is that the public can learn about his work program at www.kosice.sk after clicking on the icon of the Mayor of Košice and then on the link of the Official Program of the Mayor.

City companies and DPMK are the biggest disappointment

"Even before assuming this position, I knew that world peace would not be," Polak replied to the question of what he could not do and what proved more difficult than he had imagined before taking office.

According to him, there are still many things that hinder him and need to be changed.

"But my enemy is time. There's still a lot of management right now. I believe that, over time, I will have more time for the visionary part of my job. "

The companies of the city are a big disappointment to the mayor. 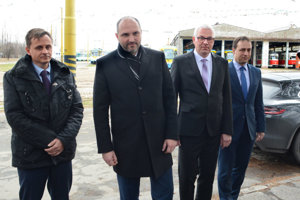 Read too: The transportation company is in danger of collapse. Kosice had to pay immediately


"I still knew that they were not working properly and we had to make big changes," he said. "It's like the era of ball counters and regular calculators persists. , but I did not expect it.We will take a lot of time to put them in our desired condition, "complained the mayor.

He also described the DP of Košice (DPMK), which does not have much money, for the great disappointment.

"We really have big problems in buying new buses continuously when those who were bought at the same time serve us one day, I regret that the useful life of the buses that will end in 2022 will expire before being paid. Polaček.

This is also the reason why the Audit and Control Department is being created in the municipality.

"At the same time, a forensic team will be created because, if we want to successfully complete the anti-corruption audit, this can not be done by the city itself. We need experienced auditors who, at the end of the process, give us a seal on documents that contain deviations of specific and professionally described conduct.This is also, for which it will be possible to deduce the liability and the documents will be applicable in the future in the courts, "he said.

Read the most important news from Eastern Slovakia at Korzar.sme.sk. You can find all the news from Kosice in Kosice, Kosice