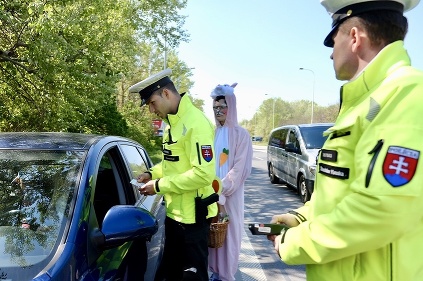 May 1 – The number of accidents and drivers related to alcohol increased during Easter.

A similar trend was expected after the encouraging results of last Easter, which showed a year-on-year drop of 29% in alcohol-related accidents. The results of the joint preventive action of the police and brewers were not pleasant. During the Easter holidays, 43 drivers inflated. As police spokeswoman Denisa Baloghová said, there was an increase in the number of traffic accidents and alcohol-related accidents compared to last year.

This happened despite a significant increase in the number of patrols on the road. Of the 8,831 drivers checked, police found alcohol use at 43. That's 0.5 percent and a 0.1 percent increase over last year. Alcohol was found predominantly in men, of whom 0.6% were inspected. For women, the proportion of drivers under the influence of alcohol was 0.02%. The most intoxicated drivers were detained by patrols in the region of Banská Bystrica (14) and the region of Bratislava (9), less in the Nitra region – just a driver.

Prevention is important. For the eighth year, the Slovak Association of Beer and Malt Producers organized a Preventive Action in cooperation with the Police Corps and the Road Traffic Safety Department (BECEP) of the Ministry of Transport and Construction of the Slovak Republic.

"We informed about the event well in advance, so we were not surprised by the results. In addition to the announced preventive and conscientious actions, we will also increase repressive controls – alcohol at the wheel is inadmissible, "said Ľuboš Rumanovský, head of the Presidium of the Police Force.
Traffic accidents increased by 30% during the Easter holidays (86 in total). Drunk accidents were 23, representing a 53% increase over the previous year during the Easter holidays. Accidents related to alcohol, according to the police, accounted for more than a quarter (27%) of all motorist-related accidents. "The only good news is that just like last year, no one was killed during a car crash during Easter, and the number of seriously injured fell from three to two," Balogh said.

"We were expecting another decline or at least an increase in alcohol-related accidents. So we'll be more aware of the risks of residual alcohol behind the wheel, "says Jana Shepperd, president of the Slovak Beer and Malt Association, with whom police are conducting pre-emptive alcohol checks.

The change is reserved according to the development of the current traffic safety situation.