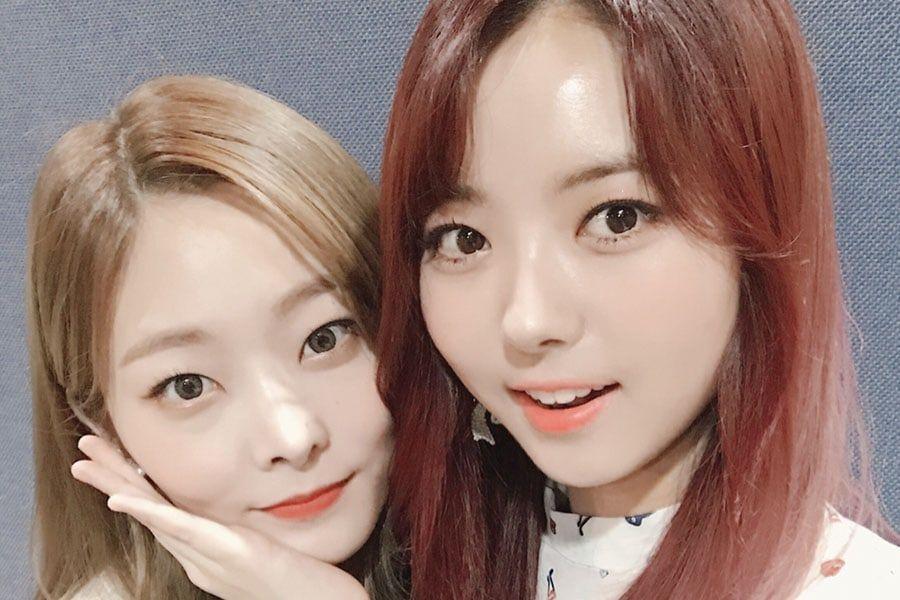 Updated on May 25 from KST:

Eunwoo and Nayoung of PRISTIN expressed their thoughts about the dissolution of the group.

There were some things I did not mention in the chat room, so I'll write here! I love all members of PRISTIN, and I'm very grateful that you've been with me for so long. I love you guys. Xiyeon, you worked so hard.

Although we may sometimes feel uncertain about the path we will take, it would be good if we could help each other and not lose hope. I'm sure the HIghs feel the same way.

Nayoung unniRoa unniYuha unni, Yebin, Kyulkyung, Sungyeon, Yewon, Xiyeon and [Kyla]We all work hard. Let's all be happy. [Kyla]you really worked hard. I do not think I could do more for you, so I'm sorry. Let's eat delicious food together the next time we meet.

I love you all [fans] also. Thank you so much for supporting us and for loving us.

Nayoung also wrote a message to fans on his Instagram:

Hi. This is Im Nayoung.

First, I apologize for having to greet you with unfortunate news.

I want to thank & # 39; HIgh & # 39; for always giving me strength during my activities, as well as all those who have constantly supported and encouraged me. I will not be able to greet you more like PRISTIN, so I'm sorry for "HIGH" and all.

I left this nest called Pledis, where I've been since 2011, and I'm getting ready for a new beginning. Thanks to the Pledis family for their relentless support while I was at the agency. I will not forget all the people who have supported me so far, and I will work harder to become an Im Nayoung that can grow a little more. Please support the PRISTIN members who have always been with me in happy and sad times as well.

Just as they say that if there is an end, there is also a beginning, PRISTIN is over, but I will start over as Im Nayoung and become a hard working person to show off a good image.

Kyla from PRISTIN now also posted on Instagram to share her thoughts with fans after the group broke up.

She wrote in English:

I'm so devastated that I have to upload this post and I know many of you have a million questions. For now, I just want to say that I'm sorry and also incredibly grateful to all of you who supported us from the beginning, from when we were Pledis Girlz until now. While Pristin has officially disbanded, I would like to ask all of you not to be upset and angry but happy with the memories we had together and all the incredible things we do. Moving on, I hope you all find in your heart to support me like Kyla Massie instead of Pristin Kyla. I had been with Pledis for about 9 years now and I am very fortunate to have had this amazing experience and to have had such a wonderful second family. Thank you. It has been a roller coaster for the last two years and I could not be more grateful to all the people who supported us in that period. Thank you very much. I love you with all my heart.

She signed in Korean, saying, "I love you, our HIghs."

Xiyeon of PRISTIN posted a letter on the Instagram to his High fans after the news was announced that the group fell apart.

Read the full letter below:

Hi, this is Park Siyeon.

First of all, I'm sorry for writing to you with bad news.

I was able to spend really happy days thanks to High, who loved me steadily throughout my 11 years in Pledis and two years with PRISTIN. Thank you.

Although this is the end of our activities as PRISTIN, I will work hard in the future as Park Siyeon to make up for all the love you have given me.

I hope that together with you, you will watch and support the new beginning of our members, with whom I have been for a long time.

I'm sorry and I'm grateful to everyone who loved and waited for PRISTIN.

On May 24, it was announced that PRISTIN was disbanded. Members Nayoung, Roa, Yuha, Eunwoo, Rena, Xiyeon and Kyla have all signed off with the agency, while Kyulkyung, Yehana and Sungyeon will remain at Pledis Entertainment.