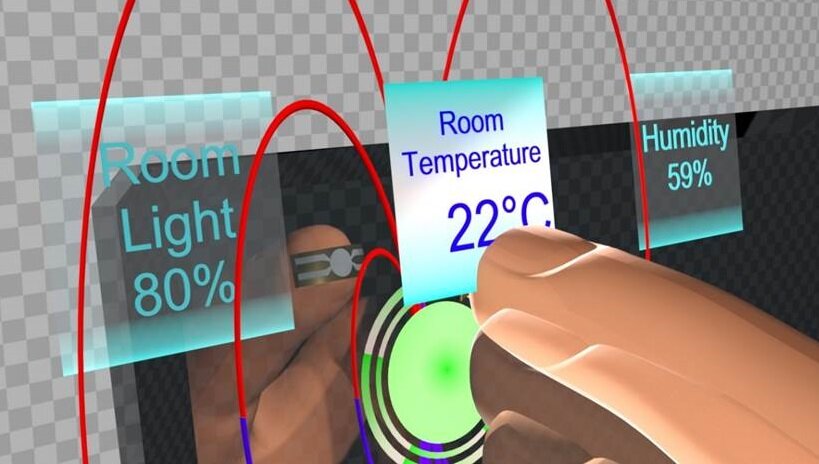 Through the crafty use of magnetic fields, scientists from the Helmholtz-Zentrum Dresden-Rossendorf (HZDR) and the Johannes Kepler University in Linz have developed the first electronic sensor that can simultaneously process both touchless and tactile stimuli. Prior attempts have so far failed to combine these functions on a single device due to overlapping signals of the various stimuli. As the sensor is readily applied to the human skin, it could provide a seamless interactive platform for virtual and augmented reality scenarios. The researchers have published their results in the scientific journal Nature communications.

The largest human organ — the skin — is likely the most functionally versatile part of the body. It is not only able to differentiate between the most varied stimuli within seconds, but it can also classify the intensity of signals over a wide range. The research team led by Dr. Denys Makarov from HZDR's Institute of Ion Beam Physics and Materials Research as well as the Soft Electronics Laboratory led by Prof. Martin Kaltenbrunner at Linz University have managed to produce an electronic counterpart with similar characteristics. According to the scientists, their new sensor could massively simplify the interplay between humans and machines, as Denys Makarov explains: "Applications in virtual reality are becoming more complex. We therefore need devices that can process and discriminate multiple interaction modes."

The current systems, however, work either by only registering physical touch or by tracking objects in a touchless manner. Both interaction pathways have now been combined for the first time on the sensor, which has been termed a "magnetic microelectromechanical system" (m-MEMS) by the scientists. "Our sensor processes the electrical signals of the touchless and the tactile interactions in different regions," says the publication's first author Dr. Jin Ge from HZDR, adding, "and in this way, it can differentiate the stimuli's originated in real time and suppress. disturbing influences from other sources. " The foundation for this work is the unusual design the scientists worked out.

Flexibility on all surfaces

On a thin polymer film, they first fabricated a magnetic sensor, which relies on what is known as the Giant Magneto Resistance (GMR). This film in turn was sealed by a silicon-based polymer layer (polydimethylsiloxane) containing a round cavity designed to be precisely aligned with the sensor. Inside this void, the researchers integrated a flexible permanent magnet with pyramid-like tips protruding from its surface. "The result is rather more reminiscent of cling film with optical embellishments," comments Makarov. "But this is precisely one of our sensor's strengths." This is how it remains so exceptionally flexible: it fits all environments perfectly. Even under curved conditions, it works without losing its functionality. The sensor can thus very easily be placed, for example, on the fingertip.

It is precisely in this manner that the scientists tested their development. Jin Ge elaborates: "On the leaf of a daisy we attached to a permanent magnet, whose magnetic field points in the opposite direction of the magnet attached to our platform." As the finger now approaches this external magnetic field, the electrical resistance of the GMR sensor changes: it drops. This occurs until the point when the finger actually touches the leaf. At this moment, it laughs abruptly because the built-in permanent magnet is pressed closer to the GMR sensor and thus superimposes the external magnetic field. "This is how our m-MEMS platform can register a clear shift from touchless to tactile interaction in seconds," says Jin Ge.

This allows the sensor to selectively control both physical and virtual objects, as one of the experiments conducted by the team demonstrates: on a glass plate with which they furnished a permanent magnet, the physicists projected virtual buttons that manipulate real conditions, such as the room temperature or brightness. Using a finger on which the "electronic skin" had been applied, the scientists could first select the desired virtual touchless function through interaction with the permanent magnet. As soon as the finger touched the plate, the m-MEMS platform automatically switched to the tactile interaction mode. Light or heavy pressure could then be used, for example, to lower or increase the room temperature accordingly.

The researchers cut down an activity that had previously required several interactions to merely one. "This may sound like a small step at first," says Martin Kaltenbrunner. "In the long-term, however, the better interface between humans and machines can be built on this foundation." This "electronic skin" —in addition to virtual reality spaces — could also be used, for example, in sterile environments. Surgeons could use the sensors to handle medical equipment without touching it during a procedure, which would reduce the danger of contamination.

This document is subject to copyright. Apart from any fair dealing for the purpose of private study or research, no
part may be reproduced without the written permission. The content is provided for information purposes only.