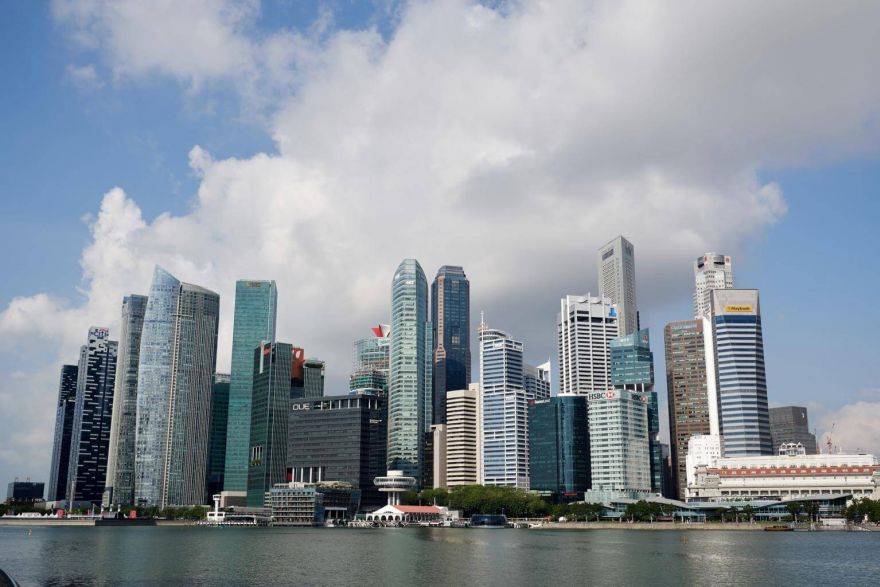 [SINGAPORE] Singapore may need to revise its economic growth projections for next year as a trade dispute between the world's two largest economies raises uncertainty and underscores corporate investment, its finance minister said.

"In the short term, the impact is still not fully felt," with Singapore holding the growth forecast for this year from 2.5% to 3.5%, said Heng Swee Keat in an interview on Friday with Haslinda Amin, of Bloomberg Television. "But any trade tension that drives away globalization will affect everyone, including the countries directly involved, but also the collateral damage in all economies."

Heng made the comments ahead of this week's Bloomberg New Economy Forum in Singapore where politicians and business executives will gather to discuss changes in the dynamics of the world as economic influence shifts from the West to the East.

In Southeast Asia, nations are facing a powerful storm of economic challenges: a battle of high rates between the US and China, tightening global monetary policy, strengthening the dollar and risk of capital outflow.

Singapore, an international trade center that benefits from trade flows and goods movement between production centers in the region, the US and Europe, has already seen exports decline this year.

Asked whether Singapore might have to reevaluate its projections yet to be announced for 2019, Heng said: "Indeed," pointing to the downgrade of its global forecast by the International Monetary Fund (IMF). Economic agencies and the central bank are in close contact with companies and are examining whether projections need to be "altered or revised," he said.

"We are beginning to see the effects of this in terms of increased uncertainty and reduced investment by companies," he said. While 2018 growth is likely to reach the top half of the projection, "next year, it depends on how the situation will continue to develop in the coming months because many of these investment decisions that need to be made will be affected."

In addition to 2019, a protracted trade war would seriously undermine the global supply chain, setting long-term growth challenges for countries as the "global production frontier" was reduced, Heng said.

The 57-year-old minister is one of several men considered a prime candidate to be the next prime minister of Singapore. He has held the position of finance minister since 2015 and previously served as education minister and managing director of the Singapore Monetary Authority.

Heng said that "the structural drivers of Asia's growth are strong. Look at the population, the growing middle class, the adoption of multilateralization and free trade, and also more and more efforts in technology and innovation."

"What we hope to do is position Singapore as a global Asian node of technology, innovation and entrepreneurship," with Singapore deriving a competitive advantage from its connectivity to the global economy and Asia, its adherence to international standards and the rule of law, and its openness . "Our protection of intellectual property and the trust people have in Singapore as a business hub are so important."

"This trade dispute is causing concern among companies, and they are all looking at how they can build resilience in their supply chain. In the short term there will be some of these immediate changes," and "the natural evolution of the supply chain is now facing a severe shock because of this change. "

"Will it be a plus for the global economy in the long run? Not if the trade dispute continues protracted because what this means is that you are moving away from what should be the production frontier for the global economy," and expertise that "should and should evolve as economic conditions can be diverted in some ways. "

"The countries of the region will have to make the most of this disorderly situation," accelerating the development of infrastructure, connectivity and other areas. "Otherwise, the supply chain will become inefficient and each of us will pay for it," he added.

The world entering regional trade blocs "can be damaging, but if we can use a bilateral agreement, regional agreements as building blocks for global agreements, and build trust and confidence in the system and allow time for economies to make structural adjustments, so I think we should continue and this can pave the way for multilateral agreements, "he said.

"I think it will serve all countries better if we have an agreement at the WTO level. The WTO remains a very important institution for us to stand up for, to maintain, because I believe that a global rules-based multilateral system" serves the interests of the countries best.

"Our priority areas remain for economic restructuring," with innovation being a key part of the work of policymakers. "The other major area is looking for infrastructure development," with urbanization being a major trend in Asia.

"I have had many, many discussions already with my staff in the outline of what we are going to announce, but not just for this year, but for several years, about the changes we need to make in our spending pattern in Our Revenue Pattern. we should not plan on a year-to-year basis, but we need to have a long-term view of some of our needs. "

Taxing less on labor and more capital "is one of the options we are analyzing," but "we have a range of possible instruments." The consumption tax will still be an important part of the tax base in the next five years, he said.