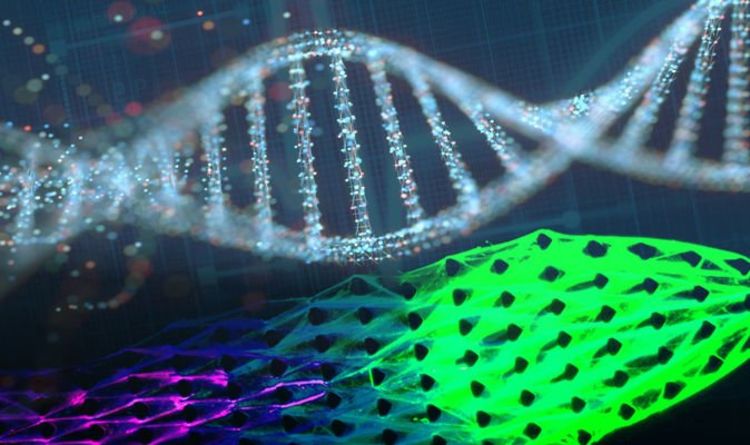 As technology continues its exponential evolution, the boundaries between man and machine begin to blend. Cornell University scientists have pushed the envelope of what is considered possible building machines from DNA capable of the key features needed to be considered alive. Leading design researchers have revealed to Express.co.uk how their "natural" biomaterial is able to metabolize, assemble and self-organize.

Not only can the material multiply similarly to DNA – the molecule that carries genetic instructions – in a cell, but it can also self-replicate as basic genetic material.

And technology can also lead to "realistic self-replicating machines," which are capable of evolving independently.

They said, "The material would normally be static and we try to introduce life properties into this material.

"This would be the first demonstration of the material that uses artificial biology and locomotion capability."

The pair also outlined the "very exciting potential" to incorporate life-like properties into a machine.

Dr. Hamada said: "Fundamentally, it is a dream to create a root that looks like life.

"And this will be the first step to go in that direction – this in itself will not be very useful in the short term.

"However, if we continue this effort, we could probably create a self-replicating machine or a self-evolving machine, and that's more of a long-term view.

"And another very interesting perspective for this life-like material concept is that we can evolve the materials now to make it even better."

Using a system called DASH (DNA-based Assembly and Synthesis of Hierarchical), scientists at Cornell University have created a DNA-based material that can reorganize to form new shapes and structures.

Like DNA, which contains the set of instructions for metabolism and autonomous regeneration, the sequence of nucleotides in the material also has this characteristic.

Starting from a block of 55 nucleotide units – the molecules that make up the DNA – the material was first multiplied hundreds of thousands of times to create chains.

The reaction was then injected with micro-fluid to provide energy and the nucleotide building units for growth.

As the liquid passed over the material, DNA developed its own new strands, with the front end of the material growing and the tip of the tail degrading in optimum equilibrium.

In this way, he made his own locomotion, crawling forward, against the flow, in a manner similar to how the mud moves.

However, just because the machine exhibits realistic properties, the researchers strive to assert that it is not alive.

Professor Dan Luo of the Department of Biological and Environmental Engineering at Cornell said, "Although this material has certain properties of life, it is not alive, so any fear is displaced.

"I understand there are some concerns about hacker life – editing genes – so people are probably thinking that our research involves this, which we are not.

"Our approach is developing from something we already know.

"We are basically building machines, so we understand all these mechanisms and what kind of effects they can have – if we design, we can understand their effects."