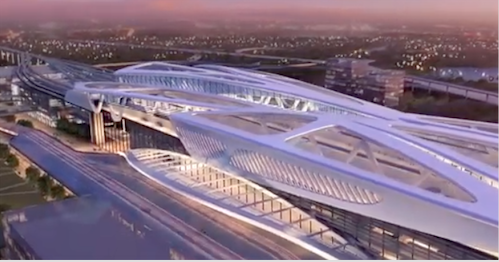 A MIDF report says the East Coast Rail Link, a catalyst for growth, will cost RM80.9 billion and boost the country's economic growth by 2.7%.

The report published today says major revisions made in the original alignment, which will see part of the southern portion forwarded to Negeri Sembilan and avoid the Titiwangsa Range, will provide a gross saving of approximately RM8b-RM10b to the government.

The ECRL was restored at a lower cost by the Pakistani government of Harapan, with a supplemental agreement signed between Malaysia Rail Link Sdn Bhd (MRL) and China Communications Construction Co Ltd (CCCC).

It has been confirmed that the ECRL will continue at a cost of less than RM44 billion, compared to its original cost of RM65.5 billion.

"We note that the declared cost of approximately RM65b is only composed of the cost of construction," the report says.

Given the latest revision, all its cost to the government will be RM69.8 billion in development cost and land acquisition cost of RM2.5 billion. With all other costs taken into account (working capital, other operating costs and financing costs), the project will cost RM80.9 billion in total.

MIDF says the project will improve economic interdependence and connectivity. Investing in a railroad project will have a positive long-term effect on the Malaysian economy.

It will also boost economic growth and development, especially in the eastern coast states such as Kelantan, Terengganu and Pahang.

"Based on our estimate, we predicted that the RM44 billion rail project will contribute 2.7% to Malaysia's economic growth. The momentum for growth will accelerate from the beginning of the project to completion.

"However, the estimated total GDP contribution will depend on the pace of the spillover effects on other economic sectors. In addition, employee compensation and the net operating surplus are projected to increase by 3.6% and 2.1%, respectively.

The report also says that Port Klang will indirectly benefit from increased incomes at the Port of Kuantan. The combined world market share of the main Chinese container lines, such as COSCO Shipping Co Ltd and Evergreen Line, was 17.7% on 14 April 2019.

The Port of Kuantan can still absorb the volume share of Chinese container lines, which will increase its volume of conventional and gateway containers.

In the meantime, this can also serve as a buffer for gateway volumes in Port Klang (ie Northport and Westports) especially after recalibration of shipping alliances in April 2017, which saw container volumes being transferred to Singapore.