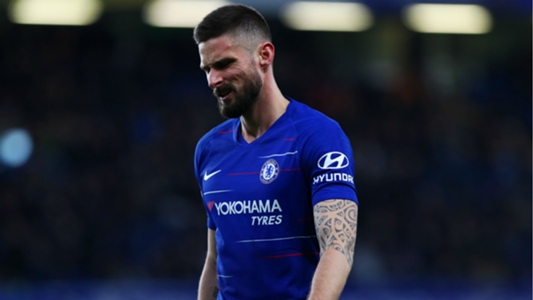 Olivier Giroud is not shy away from feeling "very frustrated" about chelsea and has demanded a bigger role if he stays.

Giroud arrived in Chelsea from Arsenal in January 2017 but has since made just 13 Premier League appearances for the Stamford Bridge club.

He initially found himself second to Alvaro Morata, and although the Spaniard departed earlier this year, Gonzalo Higuain was hired and Giroud remained a peripheral figure, though the Argentine was unable to impress.

Giroud was part of France's team that won the 2018 World Cup and he is convinced he deserves a bigger role at Chelsea.

Speaking before Thursday's UEFA Europa League quarter-final second leg against Slavia Prague, Giroud said: "Trust me, I'm very frustrated when I'm not on the field, but I do not want to show it.

"You need to keep that frustration and turn it into positive energy. Trust me, I'm not happy to play the second role.

"Next year I'm going to need a bigger role. The most important thing for me is being happy on the pitch, enjoying the game and having more minutes.

"I really want to play more, the thing is that I just want to enjoy it because I'm 32 and I won the World Cup but I want to retire satisfied."

Giroud also accepts that uncertainty surrounding Chelsea's transfer ban is not helping to clarify its future.

FIFA has approved a two-window transfer embargo on purchases by players under the age of 18, but they have appealed and can still take the case to the Court of Arbitration for Sport.

"I have to meet Marina [Granovskaia, club director]but obviously I can be here [next season]"Said Giroud. I do not know, I have no idea about this now, but before the end of the season [he wants clarity].

"Obviously we still do not know if the club will have the opportunity to hire players or not.

"Maybe it's a bit confusing now. There's no reason they should not give me another year, but I need to be happy too."