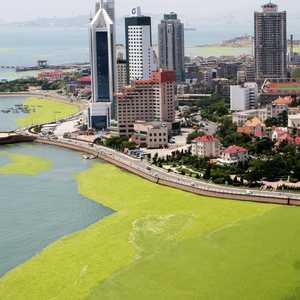 Earth's oceans will turn green by the end of the century, as climate change affects the planet, a study predicted.

Rising global temperatures will mean more than half of the world's water will change color by 2100, according to the report.

This is because the warmer waters will change the way the populations of small aquatic creatures called algae grow.

Blue regions, such as subtropics, will become even bluer, as algae – also known as phytoplankton – are killed by extreme heat.

Green areas, such as areas near the poles, will become greener as the higher temperature causes large outbreaks of small organisms, according to the study.

In addition to making the world green, the changes could wreak havoc on Earth's ecosystems, scientists warned.

"It could be potentially serious," warned Dr. Stephanie Dutkiewicz of the Massachusetts Institute of Technology.

"If climate change changes from one phytoplankton community to another, it will also change the kinds of food webs that they can support."

The algae reflect the green light, and so the oceans look greener when viewed from space.

Climate experts created a computer model that predicted how creatures could grow and change the color of our planet in the event of extreme weather changes.

It looks at how the color of the sea can change if the global temperature rises to 3 degrees by 2100.

The changes were dramatic, with large bands of the ocean turning green at the turn of the century.

"The changes will not look huge to the naked eye, and the ocean will still seem to have blue regions in the subtropical and greener regions near the equator and the poles," Dutkiewicz said.

"But it will be different enough to affect the rest of the food web that phytoplankton supports."

It followed the news that the "hot and dry" years have doubled since 1931 due to severe global warming.

This story originally appeared in The Sun and is republished with permission.