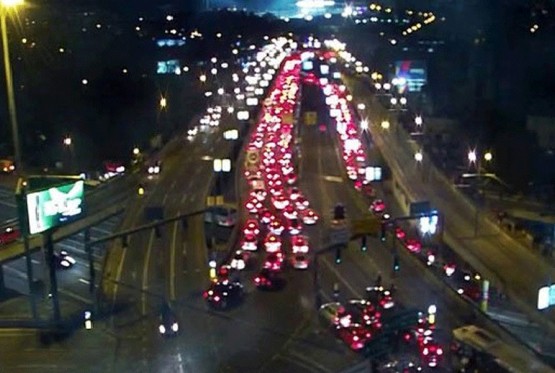 The crowds in Belgrade in the afternoon were recorded at the usual venues, from Brankovo ​​to Pančevo Bridge, from Novi Beograd to Dušanovac.

That is, tonight at 19:00 at the stadium "Rajko Mitic" is played the game of Red Star Red Star – Liverpool, and as the gates were already open at 4 pm, the columns of the fans but also the cars started from all sides to get to Ljutice Bogdan Street.

That's why it's no surprise that you're already in Autokomanda, but also on all the roads around, the total collapse.

"In addition to Autokomanda, they are packed on the highway, in the direction of Gazeli Dusanovac, as well as on the Mihail Pupin Boulevard to the Terazije tunnel," Belgrade taxi report.

Vehicle columns are also located in Slavija as well as on the Pančevo Bridge towards the city center while the intensity of the vehicle is increased on the Branko Bridge.

E-commerce is expected to be around 6:30 p.m., as the stadium gates will be closed for half an hour before the start of the match, but the delay and delay will be even after the match ends, that is, around 21 hours, writes Blic.

Hundreds of Liverpool fans, after a full day in central Belgrade, set out for the Red Star stadium.

Popular "rare" about 17 hours started from Student Square to Rajko Mitic on 20 buses.

In front of each bus there are two policemen and several policemen.

Alcohol can not be inserted into the bus, and buses will be charged one at a time and will only be started when all 20 are not full, reports B92.