Thirty years ago, The Trojans of Berlioz was the first musical rock of the Opéra Bastille after its inauguration. 2019 will also be the year of the 150th anniversary of the death of Berlioz, the 350th anniversary celebration of the Paris Opera. This convergence of memories puts Les Troyens on a promontory in the musical year, with a new production expected: Philippe Jordan in the pit, Chernyakov on stage. If the first spell is surprisingly acclaimed, the second one divides the room to the point of tearing it at the time of greeting. Whistles and boos for some, hot "brave" for others, this third production of the Trojans in thirty years certainly does not leave indifference …

Dmitry Tcherniakov, whose Caroline Alexander wrote in 2017 that the scenarios are "always bold, often fair, according to the works he dissects" (WT, daughter of snow), respects the interval, the two operas in one, which Berlioz had thought: Troy for the first two acts, Carthage for the next three. The director, who is free, almost forgets the story, only to withdraw from the libretto the essence of the story. No wooden horse – replace it? – nor of the Greek temples, Cherniakov creates here the contemporary Trojans. 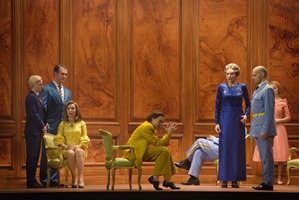 For the first two acts, the streets of a gray and dilapidated city where the population is flowing mid-Armenian, Mid-Estonian flags on the hand rub shoulders with the panels and the gilded of an opulent palace where the family in power eagerly maintains the dictatorship military. Faced with the profusion of characters and the bumps of a dense narrative, Chernyakov presents the protagonists one by one and, on the other hand, helps himself with a strip of light inspired by Times Square or the news channel. continuously. The appearance of cheap dressed gray people contrasts with the brightness and bright fabrics of the installed energy.
Aesthetics is pure and the whole is coherent. The contrast is emphasized between a worn but hopeful people and the protected power, which in private weakens … Cassandre, the free rebel, frees herself, even in her adolescent fantasy on the sidelines. Then the scene is reassembled into an elegant ballet in the hands of the machinists and presents the broad and impersonal arteries of a threatened city where the exterminations have eliminated power. We keep the striking image of a man on fire across it.

Radical change to the second part, where Carthage becomes a "psychotraumatological care center for war victims", comprising the nursing home and the center-aere, where warriors mutilated and injured in shorts and nursing staff in red chambobles. School chairs, colorful Caribbean wallpaper, swing doors and medical welcome: the aestheticism we were accustomed to gives way to soft colors and hospitable banality. Dido, who, to recall his status, is adorned with a golden cardboard wreath and a purple crepe paper train, is his director. She regains her real attributes to die of overdose, a suicide with a dramatic dryness. Let's admit that amidst patients, group therapy scenes and uniformed psychologists, it takes a little imagination and effort to hold Carthage … 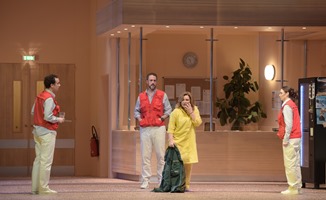 Because in this center, we relax, play ping-pong, watch TV, discuss, meditate, cardboard panels are branded by extras, we can read "Chaos", "Hannibal", "Priest of Pluto" "or" real hunting ", the Berlioz's stage sketches exposed.

This version of the Trojans amputated some ballets and recitatives – the freedom of the director or the boss alone – is directed by Philippe Jordan, whose direction, though precise, remains quite flat and timid all the time. If, as Berlioz's orchestration suggests, the tables of the Paris National Opera Orchestra are beautifully highlighted, the whole thing, which has no brilliance, color and nuances, seems quite indifferent. The restriction that we will impute to the prudence of a First!

The choruses bring body and emphasis to this opera. We have heard some slight changes in the beginning, that passion and application sweep quickly. The vocal platform is generally a very good level, even if we can guess that we would have gained in quality in volumes more intimate than those of Bastille.

Stephanie d 'Oustrac first, rebellious figure of a blind family to the cries of the people, gives a Cassandra burning and touching. French is based on a straight line of singing and unique colors that we regret not being able to hear better, lack of power. Very little is heard of Veronique Gens in Hecuba, little more than Paata Burchuladze in Priam with a sonorous tone. Stéphane Degout sings Chorèbe with precision and solemnity. Its deep bass and warm, convince again this year.
Hyphenation between the two sequences, Cherniakov makes Aeneas the survivor of the homicides, the one who sells the Trojans to the Greeks after a handshake and takes the hands and caretaker of Dido. Brandon Jovanovich plays a Sulfur Aeneas. His good diction and projection, his clear tone, make the tenor Aeneas at its peak. Partner of Aeneas in the long-awaited "Night of Poisoning and Infinite Ecstasy" – touch and success despite bad postures – Ekaterina Semenchuk offers an applied service. Dressed in an unhappy yellow tunic, he suggests a few shoved tops, offset by handsome mediums and an effective theatrical sense. The long phrases of "Ah! I'm going to die" make the fifth act aria an intense moment of emotion.
Aude Extrémo makes a poignant Anna and a sweet and deep tone. Ascagne is well interpreted by Michèle Losier, whose clarity and beautiful diction we will remember. Iopas is played by Cyrille Dubois, who once again shines with her pure and precise voice, noted in "The Blonde Ceres". Christian van Horn and Bror MagnusTødenes are Narbal and Hylas play their role properly without really (the opportunity to be) stand out.

The song did not disappoint tonight in the Bastille for this Trojan event. It is the scenario that disturbs and disturbs. Even after the curtain falls, the drama still lives on the balconies and on the ground floor … 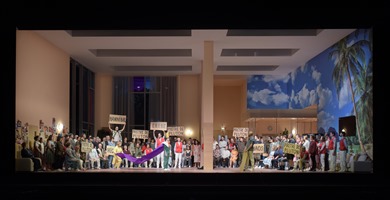