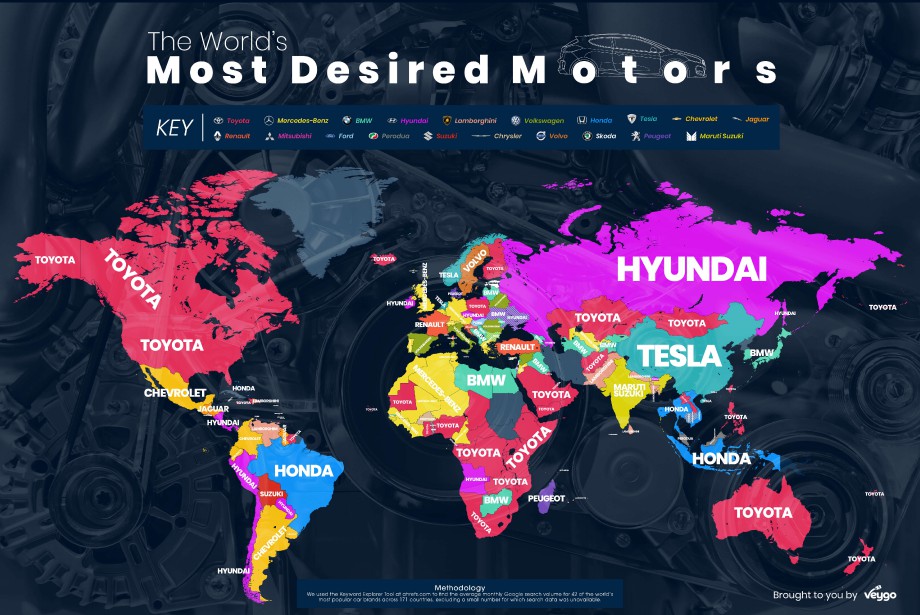 BMW is interested in more people at Google in 25 countries; Mercedes-Benz, on 23.

British insurer Veygo wanted to know which brands are the most sought after in Google in the UK but, since they left, they have done the same for every country in the world with Google data searchable enough on the subject. or 171 out of 195 countries.

In terms of absolute clicks, Toyota has also been the most researched brand in the world, with 7.8 million Google searches per month, followed by Honda (7 million). Ford follows in 3and place and is the most frequently American googlée brand (6.4 million times per month).

Evidence that automobiles are a deeply globalized industry, there are only four countries in the world where people are most interested in a national brand. The most often called googlée France is the Renault. In Germany, it's Mercedes-Benz. In Sweden, Volvo. In India, Maruti-Suzuki. In Malaysia, Perodua.

In the United States? Toyota.

In the United Kingdom? Mercedes-Benz.

And here are some other curiosities:

In China, the most searched brand on Google is Tesla. The same thing in Norway, this small country with the largest number of electric cars per capita in the world. Same thing in the Cayman Islands, a well known tax haven.

Five Spanish-speaking countries in the Americas are first interested in Chevrolet, while Ford dominates the curiosity in three countries, Hungary, but also a small Caribbean island, Aruba, and also in Gilbratar (tied with Mercedes-Benz and Volkswagen), this small little Spain still British possession.

For some unknown reason, Burkina Faso is mainly interested in Chrysler.

Evidence that the internet is also used to dream and not just to shop, Lamborghini dominates Google searches in 12 countries, of which 10 are poor or very poor. No other luxury car brand is as googled as Lambo.

In many African countries with high levels of inequality, the most popular brands on Google are Mercedes-Benz and BMW.

We know which brand is the most sought after in South Korea, but there is no data on North Korea (the gray spot between South Korea and China), this gulag without internet, where even listening to South Korean radio may result in his imprisonment in a camp.