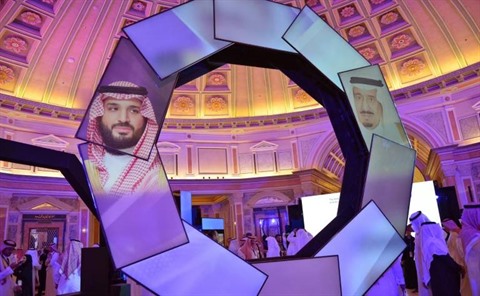 To kick off this 12-year program, the kingdom announced the signing of 37 $ 55 billion deals with foreign and local investors during a ceremony in Riyadh. the presence of Crown Prince Mohammed bin Salman. Twenty-nine other deals valued at $ 960 million have been announced from time to time, the organizers said in a statement. A total of 34 government agencies are working to implement more than 300 initiatives under this program, of which more than 130, totaling $ 16 billion, aim to deliver results by 2019.

Many are focused on implementing policies and regulations to deliver tangible results over the next 90 days, the statement said. This program focused on infrastructure, industry and logistics is part of the "Vision 2030" plan, dear to Prince Mohammed, dubbed "MBS", which aims to diversify the kingdom's economy, at the mercy of oil price fluctuations. Among the agreements announced are two memoranda of understanding between the SAMI program of the Saudi military industry and the French group Thales, specializing in aerospace and defense, and the CMI Defense of Belgium.

Another provides for an association between the national oil giant Aramco and the Saudi petrochemical group SABIC to produce many petrochemicals. Energy Minister Khalid al-Falih said implementation of several projects had already begun. Others include the construction of 1,200 km of railroad, five airports and hundreds of kilometers of roads, according to Transport Minister Nabil al-Amoudi.

At an investment conference in October called the "Davos Desert", boycotted by many international firms after the killing by Saudi agents of journalist Jamal Khashoggi at his country's consulate in Istanbul, Ryad announced the signing of investment contracts worth US $ 44 billion. Since the launch of the Vision 2030 reform plan, megaprojects have been announced worth hundreds of billions of dollars, but implementation has been slow.

At the end of 2017, the kingdom announced its intention to build NEOM, a $ 500 billion megacity in the northwest of the kingdom, all along the Red Sea. The partial privatization of Aramco, aimed at mobilizing the huge amounts needed for planned investments, has been continuously postponed. Since the collapse of oil prices in mid-2014, Saudi Arabia has accumulated $ 313 billion in budget deficits, financed by looting of the country's reserves and loans.

On Monday, Jan. 28, Khalid al-Falih said that the investments will be made under the national industrial and logistical development program in the areas of industry, mining, energy and logistics. They are expected to create 1.6 million jobs, increase non-oil exports by $ 267 billion a year and contribute $ 320 billion to Gross Domestic Product, nearly 40 percent of GDP this year. last, he said.