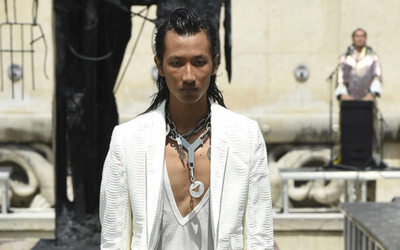 With long hair and baggy slacks and loose coats, the models descend the grand marble staircase of the Palais de Tokyo's terrace in the sun, perched on platform boots with dizzying acrylic heels. Futuristic glasses and tribal metal necklace banging on the bare torso or the V-neck knit top complete this look, which oscillates between the glam-rocker and the shaman. The tone is given to this program signed by Rick Owens titled "Tecuatl", the name of his grandmother's maiden name.

Four drummers accompanied on Thursday this particular show with the mistique atmosphere. This season, the Californian stylist, born of an Anglo-Saxon father and a Mexican mother, wanted to celebrate his origins while proclaiming his point of view without concession against Donald Trump. As he explains in a statement, "I wanted to explore my Mexican side in response to the US president's obsession with a border wall."

And tell about his childhood in Porteville, Southern California. "My mother and I learned English together when she started taking me to the nursery. My father worked at the court as a translator for Mexican immigrants working on farms that were one of the pillars of San Joaquin's agricultural industry."

"The knowledge of the Aztec eagle on the banner of the United Farm Workers and the struggles it represents are part of my childhood," continues Rick Owens, who uses as such in his collection the emblem of the association, this stylized eagle included in the necklaces, T-shirts and shirts.

Elsewhere, white Aztec-style hieroglyphs are inscribed on the black background of certain coats and trousers. In this predominantly black and white wardrobe stand out some extravagant pieces, including gold coats and gold sequins, trousers and iridescent coats and sun-yellow clothing, reminiscent of the folk skirts used by the stylist's mother.

For the rest, the collection is made up of easier parts: tight pants or cargo ships, zipped suits, jackets and jackets, lightweight and shorts. All made in nylon taffeta, coated fabrics, leather or cotton. Note the removable leather mini-pockets, which are attached to a jacket, attached to the waist with a simple drawstring.

All rights of reproduction and representation reserved.
© 2019 FashionNetwork.com