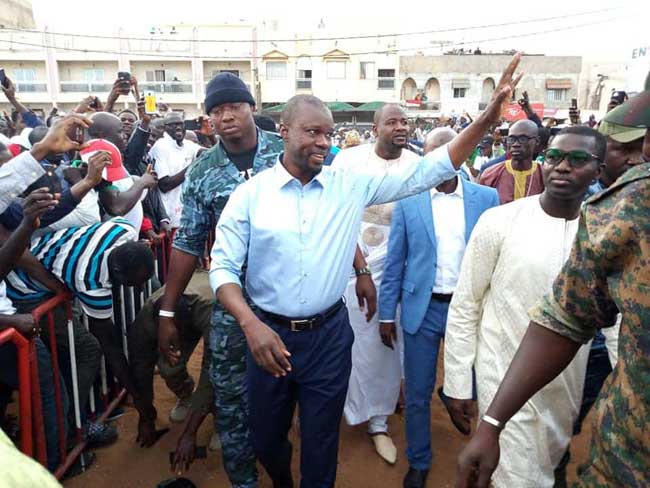 Oil, gas and mining contracts! These are your favorite subjects. Usually your media outings provoke debate. Ousmane Sonko was facing the press on June 20, 2019. This time he tried to persuade the Senegalese to go down the street to "lead the fight ". The Patriot leaders hope to mobilize "500 thousand people on the street to do Macky Sall understand that we want to find our moneyt. "At the same time he began" a lawsuit in England, the USA and Australia".

The unfortunate presidential candidate last February did not change his speech in relation to the regime in force. Like his previous walks, he shot Sall's brothers in Aly Ngouille Ndiaye, and even spoke of "high treason".

To convince the young people to lead the fight, Ousmane Sonko gave the examples: "Sudan, Algeria and the French Revolution We can not be against the will of the people. It is the struggle of the people. It's not too late to renegotiate the contracts, but you have to want it. If we mobilize 500,000 people, Macky will know we want to get our money back. The power is in a logic to invent a state of lie. The truth will not go out with Macky and his lawyer. We are betting on international justice. Since 2016, people have not set foot in the US. Go get the cause ".

He also commented on the Petrotim file: "It is a folder sewn with a white line. Sometimes there were never any payments. Sometimes the money was received by a consultant. They fight each other. It's a state lie. These statements are of no value to us. We have the means to renegotiate contracts. Evo Morales did this in Bolivia. As long as we have complex leaders, there will be no renegotiation. He signed consciously. He does not dare to denounce what he signed. "