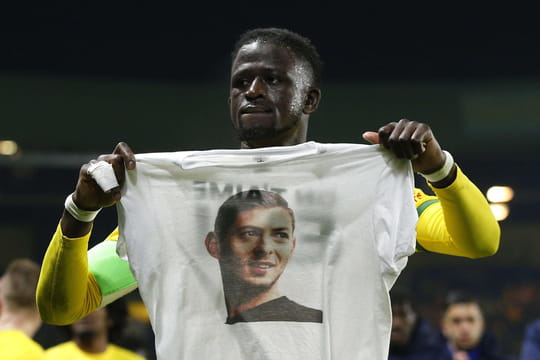 SALA – FC Nantes made a shocking homage to Emiliano Sala yesterday at La Beaujoire. At the same time, research operations continue. First debris has been found. We also know more about the airplane pilot and the circumstances of the flight.

18:25 – "It's an Argentine, who does not give up anything": the song was resumed for 90 minutes by the partisans of Nantes

The fans of the Loire of the stadium of La Beaujoire did not stop to celebrate Emiliano Sala last night, in particular with this song, sung during almost the whole match, but also after the final whistle, during the tour honor the players:

in The team of the day, Willie Mckay also reveals the contents of a long email sent to Emiliano Sala, January 6, two weeks before signing the player in Cardiff City, to convince him to study the proposal of the Welsh club. "Emiliano, my name is Willie McKay We are not interested in your personal affairs … Let us introduce you to the way we operate and how we got to this Cardiff City story … (As far as I'm concerned , we have talked to all the clubs including Manchester, Chelsea, Liverpool, we think you can end up in these clubs, we approach Nantes, as we do with many other players clubs, to get the sales mandate. (…) In reality, if you are not a soccer player, these people have nothing to do with you, there is only money that interests you. Because that is what interests us all … without feeling (…) Neil Warnock (The Cardiff coach would like to meet you, or they'll take you on a jet to show you the club, or they'll meet you in Nantes: You can be with anyone, just to have They'll pay you about £ 50,000 a week. (57,000 euros) In my experience, if you do not try the Premier League now, you'll be sorry (…) Cardiff can put a jet at your disposal to pick you up. "

Abdoulaye Toure, who was one of Emiliano Sala's closest friends on the Nantes team, also did not hide his emotion last night, in front of the press: "Today, it went beyond. There was a lot of emotion, we had to try to cancel it, but it was complicated and for 90 minutes, even before the game, I had that emotion and I still have it now.That, since the drama, I keep thinking about it, so … It accompanies my thoughts day and night.I had a special relationship with It's been a fantastic year, especially tonight, and I want to say a few words and thank you for what you did tonight, we'll try to continue, while we think of Emiliano. "

Wednesday night was rich in highlights at Beaujoire, as well as players 'entry before 9 pm, escorted by fans' songs to the glory of Emiliano Sala, the typhus in the stands, and tears all over the stadium as those of friend Yacine Bammou and former team-mate of the Argentine striker:

16:19 – When will the search operations resume?

Recall that after the discovery last weekend, on the beaches of Cotentin, two cushions probably coming from the plane that took Emiliano Sala and David Ibbotson, the Agency of Investigation of Accidents Aerial (AAIB), indicated yesterday, that it would relaunch you're looking to find the wreckage of the plane and the two men. In parallel, the private operation, launched on the initiative of the player and led by oceanographer David Merans, also continues. The latter specified that the two missions would be coordinated ("Let's work together"). Each of them has a specialized boat capable of exploring the sea in depth. Due to the difficult weather conditions, officials at both operations indicated that future farms could only take place from Sunday.

In addition to the disappearance of Emiliano Sala, FC Nantes went through two other painful episodes in recent months, with the death of Philippe Daguillon, the physiotherapeutic history of the first team on March 9, 2018 and Henri Michel. , the former captain of the Canaries, on April 24. Both men died as a result of long illness.

15:38 – The specialized vessel, mobilized for research, arrived in Guernsey

Last night, David Mearns, the man who manages private research at the initiative of Emiliano Sala's family, said yesterday that the specialized boat, which should allow, from Sunday, to probe the seabed, was on the road to Guernsey. The ship, named Morven, arrived safely this morning. Here it is:

15:23 – FC Nantes thanks the fans for the honors of the Hall

The club Nantes shared a tweet this Thursday to thank the public of La Beaujoire and more particularly to the groups of fans who actively participated in the design and holding of the various celebrations in honor of Emiliano Sala:

3:04 PM – Cabella explains why he did not celebrate his goal

Author of the opening score of Saint-Etienne yesterday in Nantes, Rémy Cabella celebrated his goal during the restriction. "If I celebrate there, it's really a lack of respect," he said after the meeting "No one would have celebrated in the team … It's beautiful what it was. There's rivalry in football tonight, but there's really something else, and there is life especially, we pray for Emiliano Sala ".

Zinedine Zidane joined La Beaujoire's tribute to Emiliano Sala yesterday, posting this message in his Instagram account: "Today, I see Nantes thinking about his family and Emiliano's club, waiting for a miracle."

Wahbi Khazri, striker of Saint-Etienne, mixed zone, last night: "There was a great thought for Emiliano Sala of both teams during the match, the public gave him a good tribute, he deserves it is really a good person, in the field and out, I'm giving all my thoughts to his family because I know it's not easy, he was a son, a brother, and there are things in life that are more serious than what we do there for 90 minutes, we can not forget (…) Personally, I really had trouble getting into this game, we heard the songs in his honor, it was a strange night in football, but, like I said, he is in second place.

13:31 – Rongier does not want to relocate Emiliano Room number 9

Valentin Rongier, the captain of FC Nantes, also gave his impressions after the match against Saint-Etienne last night, evoking, of course, the homage to Emiliano Sala: "The most moving of tonight is three moments: the return to the field, the 9th minute and then the final, going around the stadium because we could see all the fans singing the name of Emi and it reminds us a lot of things not for my sake, but for me, honestly, I do not think we should relocate the number 9 so that Emi is always with us.We were afraid of this game, but it is good to repeat in front of our audience and not The more tired we were, the more we came to think less about it, and this allowed us to release the horses in the second time. "

13:19 – A Spanish banner in honor of Emiliano Sala

13:00 – McKay revelations about the disappearance of Emiliano Sala

Agent Willie McKay, who served as an intermediary with his son Mark, during the transfer of Emiliano Sala to Cardiff, speaks today in the columns of L & # 39; Team. He gives his version of the facts about the preparation of the journey from Nantes to Cardiff. According to him, when Sala indicated that he wanted to return to Nantes to greet his former team mates, the Cardiff club offered him a commercial flight, with mail, then his father and son McKay proposed to the Argentine to take Liberte a private plane, more fast. "When you spend 17 million euros for a player, you do not offer him a flight on EasyJet," says Willie Mckay. The agent then explains that he contacted David Henderson to propose piloting the plane, but the L & # 39; Team indicates that the latter "for some unknown reason, proposes the mission to another pilot, David Ibbotson." The latter agrees to take the Cardiff Room to Nantes and then take him back to Wales. What follows is much more strange. According to McKay, David Ibbotson lost his credit card and Sala is forced to book Ibbotson hotel nights in Nantes, but it is finally David Henderson of England who manages the debt repayment. the fourth, but also the expenses of the plane as the airport charges. "As was the Henderson bank card, everyone thought he was on the plane," says McKay.

12:50 – The shocking image of Halilhodzic during the tribute to the Hall