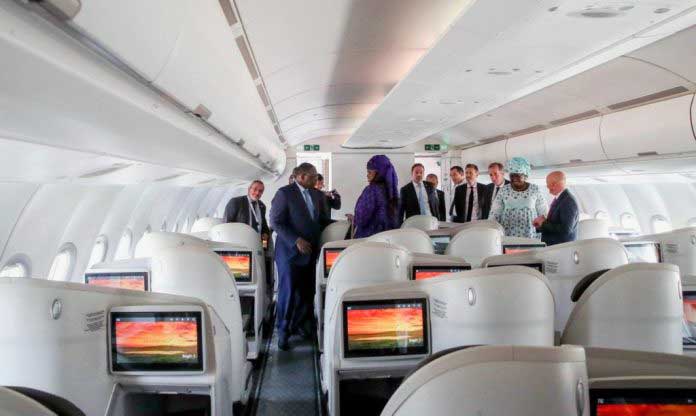 Fasten your seatbelts! The Air Senegal Airbus A330 900 Neo "Casamance" unfolds its wings in a "teranga spirit". In fact, the new aircraft, called Casamance, Air Senegal was officially received yesterday by President Macky Sall in the presidential pavilion of Blaise Diagne International Airport (Aibd).
The ceremony began with the landing of Casamance with great pomp, washed by two oil tankers and received by Philippe Bohn, general manager of Air Senegal, and his team. The crew, made up of young Senegalese, with receptionists in gray dress with belt and red shoes, was a protection for the employees. And the President, accompanied in particular by Prime Minister Dionne, President Hoct Tanor Dieng, Mr Bigot, Ambassador of France in Senegal, visited the aircraft. "Today we are in Dias for the reception of the first Airbus A330 900 Neo of the national airline, and for the record, this is Airbus' second aircraft manufactured by this model and the first on the continent," said Sall.
He said: "I wanted to honor through this Airbus A330 900 our beautiful natural region of Casamance, giving its name to this aircraft. This new acquisition reinforces our national air fleet already comprised of two new Atr 72-600s and will include seven medium-term aircraft , with the delivery of the second Airbus A 330 900 Neo and a third Airbus A 319 during this year. "
The President also mentioned planned airport projects in the southern region from which the aircraft is named. "I asked the government to work swiftly on the international renewal and certification of Cap Skirring Airport, pending the complete reconstruction of Ziguinchor airport and the modernization of Kolda and Sedhiou airports."
Philippe Bohn, in turn, rejected his strategic management vision: "The reception of this aircraft marks a new era for Air Senegal, which is based on a strategy of conquest that results in the purchase of new high-value added aircraft. and operating high-performance intercontinental highways.It is important to offer our passengers unparalleled service and comfort. "
Air Senegal's new aircraft has, among other things, 290 seats, a cabin layout for business class passengers, economic and economic premium (wifi, electrical outlet in each seat …). Casamance goes to Paris Roissy CDG airport tonight, for what is supposed to become one of its main space shuttles, the Dakar-Paris-Dakar route. This, pending receipt of the other device, planned for the summer of 2019.
intern