Côte d'Ivoire, Burkina Faso and Mali concentrate 73.6% of the volume of operations

As of December 31, 2017, twenty-eight (28) mobile financial services deployments are listed in the Union, compared to thirty-three (33) a year earlier. This offer of services is supported by: 18 (eighteen) partnerships between banks and telecommunications operators; eight (8) electronic money institutions (EMI); two (2) microfinance institutions (MFIs). This is evident in the report released by the Central Bank of West African States (Bceao) at the beginning of April 2019.

The sector, currently characterized by declining partnerships between mobile operators and financial institutions, saw the arrival of new entrants such as MTN Mobile Money in Benin, Orange Money in Burkina, MTN MFS and Sgbci Yup in Côte. Côte d'Ivoire, Ecobank in partnership with the Orange Group in Guinea-Bissau, Bimao ​​and Sgbs-Yup in Senegal, as well as BTCI in Togo, but also the cessation of activities for Sgbci, UBA-CI and Ecobank-CI that were in partnership with the MTN group. 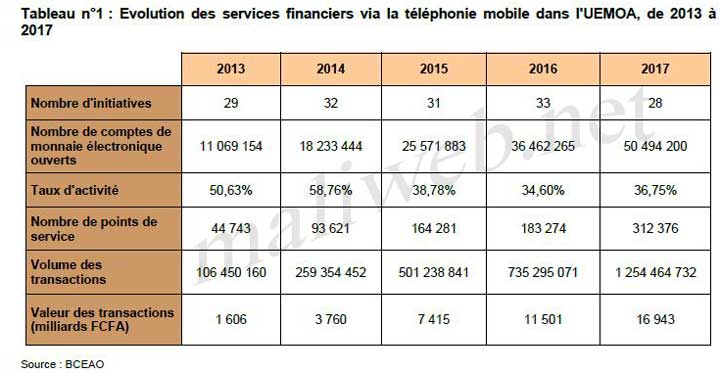 In fact, in favor of the new Instruction No. 008-05-2015, which governs the terms and conditions of the activities of the issuers of electronic money in the member states of the West African Monetary Union (Umoa), several companies of mobile telephony which were in partnership with banks for the provision of digital financial services, have broken their collaboration to create autonomous entities (EMEs), through its subsidiaries whose activity relates specifically to the issue and management of electronic money.

Almost 3.5 million transactions were processed on average per day for all mobile payment platforms in the Union, compared to 2.0 million in 2016.

The evolution of financial services can be explained in particular by the entry of new market players, the reinforcement of the acceptance network, the deployment of service points, as well as the communication strategies initiated by the participants, in particular the provision of new services.

The evolution of e-currency subscription remained limited in Mali and Niger. In fact, a slight decline in the number of subscribers was observed in Mali (6.83 million, or -0.56%), in connection, in particular, with the socio-political context observed in Mali. Niger registered a slight increase of 2.8% (2.22 million versus 2.16 million in 2016).

The use of mobile telephony by the financial sector contributed significantly to raising the overall rate of utilization of financial services, which stood at 55.02% in 2017, to a strict 16.99% and increased by 35.88%.