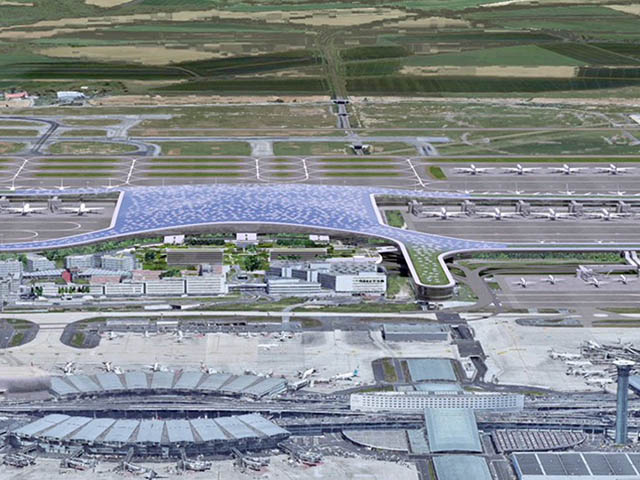 The airport manager of Paris ADP proposes to invest 6 billion euros between 2021 and 2025, in an economic regulation contract doubled over that currently underway and financed by increases Copyright. O SCARA denounces a " rough handling Marking a " contempt "Airlines.

While the future of ADP's privatization will be in play again next week with the final adoption of the Covenant Law, the airport group this week published the Public Consultation Dossier (DPC), detailing its proposals in the preparation of its Economic Regulation Agreement 2021-2025 (CRE4), which will be signed next year with the State. The manager of Paris-CDG, Orly and Le Bourget invest in its development 6 billion euros in five years, which will be financed an annual change in tariffs equal to inflation increased 1.35 points average for the period 2021-2025 (against inflation + 1% in the period 2016-2020) "The statement explains that, despite doubling the amount of the investment, the trajectory of tariff evolution remains moderate, below the average observed for comparable aerodrome managers ".

This five-year investment plan will allow, under the best conditions of increasing passenger traffic estimated an increase of 2.6% on average in the period 2021-2025 (including 3.5% in international traffic), according to the ADP statement, " optimizing existing infrastructures and pursuing a demanding maintenance policy "It will also allow us to reconsider the global functioning of the Paris platforms" for dedicating unprecedented means The reformulation of road access, beginning the construction of the Terminal 4 of Charles de Gaulle and organizing the west Orly. He will dedicate himself substantial resources For scanning and passenger routes and the continuous improvement of the reception and the quality of the service in the terminals. This proposal provides for " consistent with the ambition of carbon neutrality Paris airports of the ADP Group in 2030 ".

Augustin de Romanet, President and CEO of the ADP Group, said: By reconciling the short, medium and long term, and managing to schedule significant investments, limiting the rate increase and allowing a fair return on capital, the company's proposal for the next economic regulation agreement 2021-2025 allows to take into account the needs of all interested parties. It demonstrates the strength of the ADP Group's industrial and financial model to face the many challenges it faces and its ability to invest and develop in Paris. ".

Users and other stakeholders remarks to the Minister for Transport and to the Directorate-General for Competition, Consumer Protection and Fraud one month from 2 April, whose deadline may be extended by fifteen days by decision of the Minister of Transport. The government will then send a commission to advise on the project; then trading with ADP will begin.

Not so fast denounces the SCARA (Union of Autonomous Airlines), which includes 40% of French airlines based in metropolitan France and in the overseas territories, as well as airport assistance and training companies: the ADP group tries to " passage into force Common " facade debate "And it seems" refuse by all means "The consultation. The public consultation file « alleges that exchanges with airlines were "important", "made it possible to identify users' needs", "focused on all issues"; although it is not, the general opinion of the airlines that made it known by many letters addressed to both the ADP and the Ministries involved, requesting even the organization of groups of work by subjects. (investments, financing, royalties, etc.) making possible "The CPD would therefore be based on SCARA in" unconfirmed hypotheses This, in addition, leads to further price increases " so unjustified, if it does not come back increase profits ADP is already particularly high and grows constantly by almost 30% each year "(Its revenue is 4.6% to 3.137 billion euros, with an aeronautical royalties product Paris Airport + 5.6%, 1115 million euros, and EBITDA of 1961 million, an increase of 25.1%).

SCARA's complaint is that ADP's estimate of the increase in air traffic in 2.6% per year during the period 2021-2025, " without specifying how the forecast was calculated or discussed with airlines; without indicating, in particular, the potential downward impact of the use of large international hubs by new generation long-range single-aisle aircraft ". At the Copyright to come, ADP « qualifies as "real tariff moderation" its proposal of a + 1.35% evolution in addition to inflation, while after years of extravagant increases in inflation and passenger tariffs, airlines were precisely expecting large tariff reductions "Between 2006, the date ADP's share capital was opened up to private capital, and 2018, ADP's airport fee rates increased, according to SCARA, 42% while at the same time inflation was 15% and the price of air tickets fell by 20%.

In publishing its Public Consultation Document, ADP wants to " cut a quiet consultation with its customers, airlines Concludes SCARA. With a specific objective: to establish as soon as possible an Economic Regulation Agreement with the State " which will guarantee its investors, in the framework of its forthcoming privatization, a invulnerable profitability "In a letter sent to ADP on March 27 that La Tribune bought, the various airline associations (IATA, FNAM, BAR or SCARA, among others), but also easyJet and FedEx denounced" the approach chosen "Especially the fallout from the publication of the DPC since the next economic regulation contract will not come into force until April 2021.