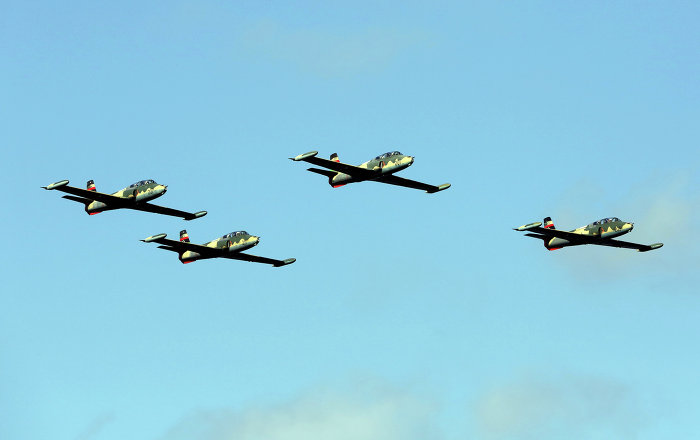 The media center of the Karama Operations Room of the Libyan National Army, led by Marshal Khalifa Hafer, announced the attack on several sites belonging to the Libyan government forces on the outskirts of the Libyan capital Tripoli.

The statement added that "the sites targeted by the air strikes and destroyed were in the area of ​​Wadi Al-Rabie, where an armed machine was designed for M / 23 and the number of three vehicles, and the area near the Diplomatic Club which has several tanks, in addition to the Ain Zara area. "

The Al Karama Operations Center media center clarified that "all injuries were direct and accurate and our aircraft were safely returned to their bases."

The General Command of the Libyan National Army, led by Marshal Khalifa Hafer, announced the launch of an operation to eliminate what he described as terrorism in the capital Tripoli, located by the reconciliation government internationally recognized by Faiz Sarraj, and called on the last forces to fight the movements of the Hafar forces by force, accusing it of a blow against the political agreement. For the year 2015.

Violent clashes in the southern suburbs of Tripoli began between government and General Command forces a month ago, leaving at least 376 dead and 1822 injured, according to the World Health Organization. While the International Organization for Migration estimates the number of displaced by 38,000 and 900, noting that civilians flee their homes.

Since the fall of the Muammar Gaddafi regime in 2011, Libya, the oil-rich country, has witnessed several internal conflicts, but the attack launched by Hafar forces on Thursday marked a clear deterioration between the two rival authorities.

The government in Libya is led by Fayez al-Sarraj, formed in late 2015 under a UN-sponsored agreement based in Tripoli and authorities in eastern Libya supported by the Libyan National Army led by Marshal Khalifa Hafer.

Fighting in progress to announce the UN envoy to Libya delayed the Libyan National Congress scheduled for mid-month.