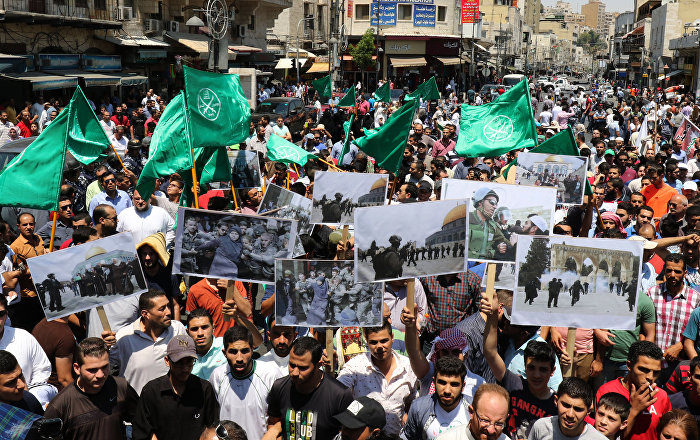 Questions about the expected ranking are related to the implications and effects, especially in the presence of dominant Islamic parties in some Arab countries representing the Muslim Brotherhood.

The Muslim Brotherhood movement, which dates to 1928 in Egypt, is already on the terrorist lists in Egypt and in several Arab countries, but it is an authority in some other countries. Sputnik talked about these influences, with party and expert representatives, where the views varied in the motives and objectives of the decision, they say.

In Tunisia, the Nahdha movement, which participated in drafting the 2014 constitution, represents many of the current parliament's seats, the political Islam that exists, and one of its members says it does not represent the Muslim Brotherhood.

"The decision will not affect Tunisia because there are no chains that could be classified as belonging to the Muslim Brotherhood," said Imad Khimiri, a member of the Tunisian parliament.

Al-Khumairi said in a special statement to Sputnik on Wednesday that the Nahdha movement is not affiliated with the Muslim Brotherhood and that it is a Tunisian of origin. The party derives its presence from the constitution of Tunisia, Tunisia.

He explained that the Tunisian Renaissance is the origin, content and goals of the other political parties in Tunisia.

"The current situation needs to be addressed within the framework of the democratization of political life in the Arab countries, which do not represent the birth of democracy in the Arab world. It can not be classified as belonging to Islam, which was seen in Iraq and Syria under the name of "Da" and "Al Qaeda".

"Some of the experiences of political Islamism can be praised in Turkey, Morocco and Tunisia, and they are similar to the democracy of Christianity in Western countries. Attempts to put everyone in the same basket will achieve the process of democracy building in the Arab and Muslim world "he said.

Abdelaziz Aftati, a member of the General Secretariat of the Justice and Development Party in Morocco, representing the Islamic political movement there, said that such a decision by the US government would not affect the party's position in Morocco.

He added in special statements to "Sputnik" on Wednesday that the ruling will not affect the AKP nor the Moroccan street, especially that Morocco has sovereignty, and is unaffected by those efforts of the American administration, which he described as "blackmail ". Other systems ".

He added that the resolution will not affect any of the Arab countries, nor will it affect international relations because it is based on respect for sovereignty.

Rasul Tusun, a former Turkish parliamentarian, says that US efforts on this issue are not from foreign dictates, and that "Western imperialism" is afraid of local movements.

He added in special statements to Sputnik that the Muslim Brotherhood movement is a local group, raises fears of Western imperialism, especially when it came to power in several Arab countries and increased in other countries.

He explained that "American fears come from the belief that the arrival of local movements threatens and threatens Israel, so it seeks the lack of access to governments and control in Arab countries, and this affects the democratic process in the world," he said.

He stressed that such a decision will increase forced Turkish-American relations, especially because it is tense in some respects, but is compatible in other respects, which the two countries seek to maintain.

He stressed that "the issuance of such a decision will have a significant impact on the political relationship, especially as the Justice and Development Party in Turkey aligns with the peoples, as the Turkish president refuses to submit to the dictates of the United States, which can lead to a voltage in the existing voltage ".

"The decision will have implications for Turkey, Qatar and Tunisia," says Jamil al-Thiaby, editor-in-chief of the Okaz newspaper.

"The decision will have a significant impact on Qatar, especially as it is the backer of all the actions and activities of the Muslim Brotherhood in the world." The organization's leaders in Qatar and Turkey, as in Tunisia, are represented by Al Nahda, "he said.

He explained that the resolution was close to the resolution, waiting to be issued soon, rather than lengthen the procedures to include the group on terrorism lists. He urged the Arab countries to take a serious stand on the group that took advantage of the climate of freedom and spread generations that spread hatred and hatred and spread the culture of atonement, and take the steps of the European Union in this way, according to the text of your speech.

He pointed out that President Trump is already taking decisions and implementing them, as was the case in the withdrawal of the agreement with Iran, and that the decision to include the group will work for the president of the United States in proportion to all countries hosting these groups.

For his part, says Qatar academic and media, Dr. Ali Hill, that the US administration seeks this classification to satisfy Israel.

He added in special statements to Sputnik that the Brotherhood has a long history of resistance to Israel and refused to acknowledge them, prompting the Zionist lobby in the US administration to make such a decision.

"The step is related to the Zionist plan for fourth generation wars, which aims to erode the Arab region and its riches, and which calls the Middle East into the existence of Israel and does not call it the Arab region."

He added that the classification of the Muslim Brotherhood on terrorist lists is related to other categories that the United States does not want as Hezbollah, and that all targets are related to Israel.

He stressed that relations between Qatar and the US will not be affected by this decision and that Qatar has nothing to do with the Muslim Brotherhood, especially when it opened its doors to leaders and individuals for their Arab and Islamic considerations after all doors were closed in their faces. The activity or emission of any data from within Qatar and living like other individuals in Qatar does not represent any current.

The White House said Tuesday that the administration of President Donald Trump was working to classify the Muslim Brotherhood as a foreign terrorist organization that would impose sanctions on the oldest Islamic movement in Egypt.

"The president has consulted the national security team and leaders in the region who share their concerns, and that classification is on the way to an internal process," White House press secretary Sarah Sanders said in an e-mail.

Turkey's Justice and Development Party (AKP) has commented on White House statements that the government is classifying the Muslim Brotherhood as a foreign terrorist organization.

A party spokesman, Omar Glick, quoted Anatolia as saying on Wednesday that the US's tendency to classify the Muslim Brotherhood as a terrorist organization would promote anti-Islam in the West and around the world.

"A possible US decision" would be a major blow to the demands of the democratic transition in the Middle East and would give full support to undemocratic elements, and this is also the largest support that can be made to publicize a firm organization, "Glick said.

Egypt has designated the Muslim Brotherhood as a terrorist group after the protests that led to the isolation of the group's president Mohamed Morsi in 2013.

Saudi Arabia has also included the Muslim Brotherhood as a "first list" of terrorist and extremist organizations that are banned from becoming members or endorsements in 2014.