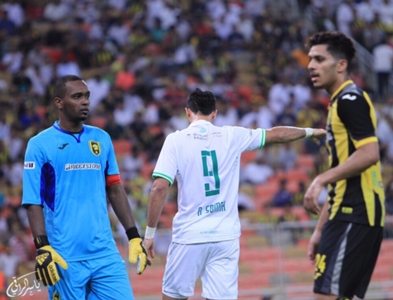 It is decided to install the Derby Jeddah between the Union and Al Ahli in the Professional League of Saudi Arabia on 25 November.

A major controversy arose in the match between Al Ahli and Al Ittihad at the Jeddah derby, which will officially reunite the two teams in the tenth round of the Prince Mohammed Bin Salman Professional Tournament.

After a major controversy in recent days, the Saudi Football Federation announced on Thursday the postponement of the Super Cup of Egypt and Saudi Arabia between the Egyptians Ahly and Jeddah.

It was also decided to install the Derby Jeddah, between the Union and Al Ahli, the Saudi Professional League, in advance, on November 25.

Grand Jeddah and the rector of the Saudi clubs are ready for any Ahli, the Union will join the date, God willing

Immediately after the game's announcement, Nawaf Al-Mekren, the club's coach, Al-Ittihad Hashtag, called on Al-Awda Al-Jawhara, referring to his team's ability to win this game.

Al-Muqairn confirmed his team's readiness to face Ahli at the Jeddah derby on Nov. 25 after the Saudi Football Association announced the postponement of the supra-Egyptian Saudi clash and set the date of the showdown on schedule.

"Grand Jeddah and the rector of the Saudi nightclub are ready for my family," Nawaf al-Muqairn, president of the federation, wrote in a personal commentary on Twitter's social networking site. "The federation will be there on time … no excuses, neighbor."