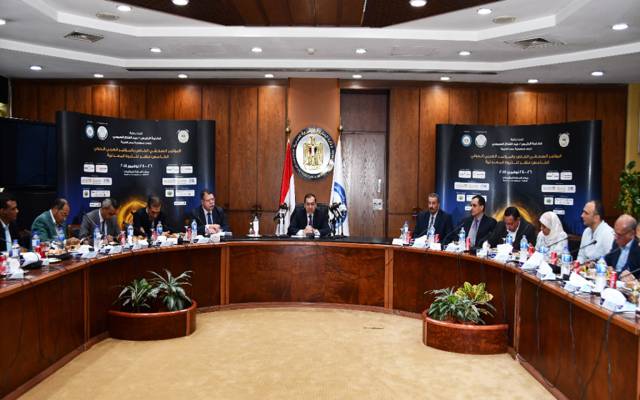 CAIRO – Egypt's Minister of Petroleum and Mineral Resources announced the launch of the 15th International Conference on Arab Mineral Resources and its exhibition in Cairo from November 26 to 28 with the participation of ministers of oil and mineral wealth in Arab countries.

Minister Tareq Al-Mulla said in a statement Sunday that the conference will be launched under the motto "Investment in Mining and Economic Development in the Arab World."

He stressed that the conference coincides with Egypt's efforts to develop the mining sector and develop a roadmap to promote it, which is governed by the state's public interest, attract new investments and encourage investors in this vital sector that is planned to be a of Egypt's most important sources of national income and public revenue..

Mulla said the conference is held every two years since its launch in 1972. It is an Arab and international lighthouse for the mining industry, with strong participation of ministers and stakeholders in the mining sector regionally and internationally, contributing to the development of investments, and sustainable development..

He noted that the conference is accompanied by a technical presentation to present the latest scientific, practical and technological developments in the field of mineral wealth and represents an opportunity for direct dialogue between investors, experts and experts working in this field..

The minister stressed that the amendments being made to the mineral wealth law announced in 2014 witnessed the participation of a strong community of specialists, specialists, investors and authorities in the country, with the aim of encouraging investments and creating a climate in the mining sector for inject new investments into global models..

He pointed to the tendency of the Ministry to invest information and existing data and geological map on mineral wealth and convert it into an electronic investment map..

He pointed to the completion of development studies, which was prepared according to an international expert consultant.

This experience provided clear information on the success models applied by many States, particularly in Latin America and Africa..

Sentinel: Gold mine production of sugar fell 25% in the third quarter

Egypt and Saudi Arabia discuss cooperation in the oil, gas and mining industry

Minister: Egypt is the largest and fastest growing natural gas market in Africa and the eastern Mediterranean