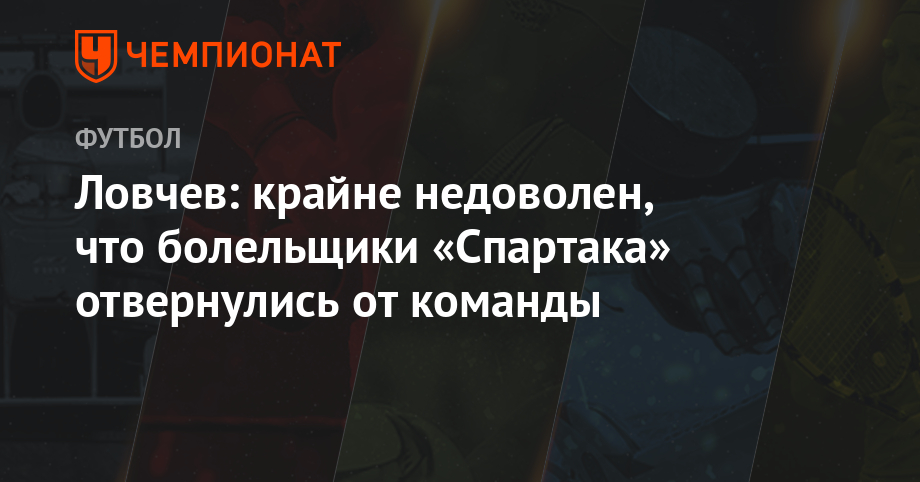 Lovchev: extremely dissatisfied that "Spartacus" fans have moved away from the team

Former soccer player "Spartacus" Evgeny Lovchev After a home defeat in the 13th round of the Russian Premier League with the "Ural" (1: 2) he shared his opinion on the situation in the capital club.

"Riancho, of course, is not Spartak's coach. But the main thing is that in "Spartacus" everything is done in one place. We decided to dismiss Coach Carrera for lack of results – this is the right decision. Well, then what? The replacement is not ready and apparently Riancho has actually given four games to prove himself.

But in "Spartacus" it should not be so. Yes, it happened to Carrera, but there are no coincidences all the time. And if you decide to change trainer, he needs a replacement immediately, and not after some time.

Spartak now has not only the game but also the responsibility. Here, with the "Ural" leveled the score – and then missed. Well, how's it going? No one controls the flanks or the center. Without attention, safety net.

Football players and coaches should be blamed for the game, for the situation where the team is now – also the lead. And not the person who finances the club, but the staff – Rodionov and Izmailov. You can be silent as they are. And you can lead to this state of affairs.

After all, no Carrera has led the team to that. Spartak has Adriano, Zé, Hanni, Melgarejo, Zhigo, Jikia, Glushakov, Yeshchenko … These people can achieve victories, the main one is calm, trust and confidence. None of this in "Spartacus" is not now.

I am extremely dissatisfied that the fans have turned away from the team and have not gone to the stadium or whistled from the stands. For example, in 1977, when Spartak and I flew to the first league, we were going to a full stadium. That was support! And now … When all was well, when it was a championship – everyone was jumping and cheering, in crowds going after the players. When the hard times came, they were offended, cursed, and turned away, "Lovchev wrote on his Facebook page.

The defeat of the "Ural" extended the series of "Spartacus" without gaining RPL for three matches (one tie, two defeats). The team is in sixth place in the Russian Premier League standings, winning 19 points.

Bubnov: Riancho is not the expert who should manage Spartak