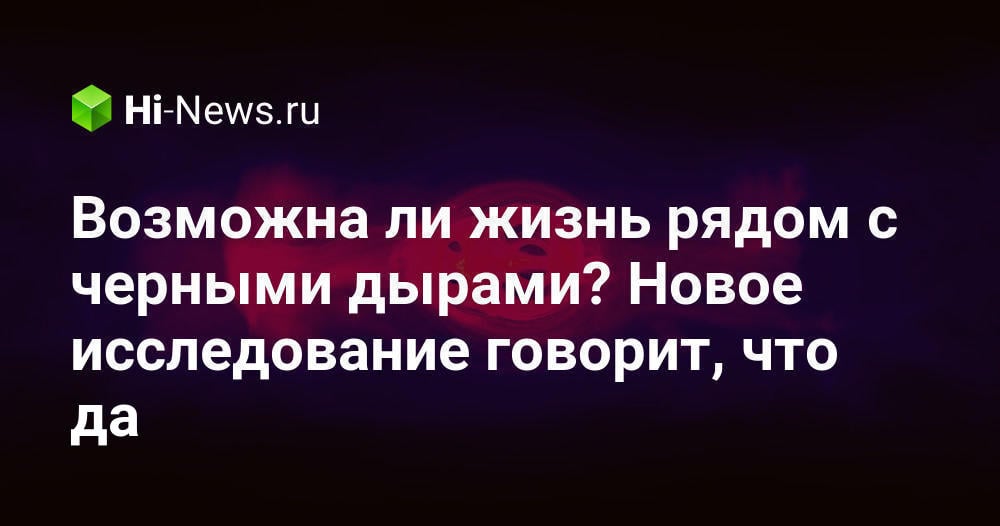 Black holes are one of the most frightening and destructive forces in the Universe, but some scientists suggest that the radiation of these objects, which they create during the absorption of surrounding matter, can contribute to the emergence of biomolecular structural elements of life and even stimulate photosynthesis. On a general scale, this may mean that there may be many more worlds capable of supporting life in our galaxy than our current hypotheses suggest.

For his new research, whose results have recently been In Astrophysical Journal, astrophysicists have created computational models to study in more detail the details of gas and dust radiated disks, called active galactic nuclei (AGN), which revolve around supermassive black holes. Being one of the brightest objects in the Universe, they are formed as a result of the curvature of matter by the gravity of a black hole. This process is accompanied by the release of large amounts of energy.

Since the early 1980s, scientists believed that the radiation of these objects creates a dead zone around the active galactic nuclei. Some researchers have even suggested that AGNs are the reason why we have not yet discovered complex forms of extraterrestrial life, in particular, toward the center of our galaxy. In the center of the Milky Way there is a huge black gift Sagittarius A *. According to the findings of previous studies, any Earth-like planet that will be located at a radius of 3200 light-years from the center of the galactic's active nucleus under the influence of powerful X-rays and ultraviolet radiation from AGN will not be able to preserve its atmosphere.

"People usually talk only about the destructive effects of black holes. As part of our research, we wanted to give a new insight into these effects, in particular, the radiation from black holes, and try to find some positives in them, "says lead researcher, Harvard University astronomer Manaswi Lingam.

Is life possible near black holes?

Computational models created by researchers have shown that planets with an atmosphere at a density comparable to that of Earth and larger, and being far enough away from the AGNS, will be able to preserve their atmospheres and, in addition, will be able to maintain life on its surface. Scientists explain that at some distance from the center of AGNs, the latter, like the stars, have so-called "habitable zones," where the amount of ultraviolet radiation is not so high as to destroy all life that may be there.

With these levels of radiation, scientists say, the atmospheres of the planets will not collapse. At the same time, this radiation will be able to break down the molecules, creating the compounds needed to produce the structural elements – proteins, lipids and DNA – that are needed at least for the life we ​​know. For black holes the size of the same Sagittarius A *, located in the center of our galaxy, the "habitable zone" will begin approximately 140 light-years from the center of the black hole (1 light-year = 150 million kilometers), say the researchers. At the same time, the negative effects of its radiation will be significantly reduced already within a 100-light-years radius of the AGN center.

Black holes and photosynthesis. What do they have in common?

Scientists also examined the effects of this radiation on photosynthesis – the process of synthesizing inorganic organic substances, due to the energy of light through which plants produce oxygen, and some types of bacteria and algae also glucose. As noted above, AGNs are capable of emitting huge amounts of the key element necessary for photosynthesis – light. According to Manaswi, this aspect would be especially important for so-called orphaned planets, objects that have a mass comparable to the planetary and spherical shape and are essentially planets, but not gravitationally connected to any star. According to the scientists, about 1 billion of these wandering planets may be in the "habitable zone" of galaxies the size of our Milky Way.

Having calculated the area where AGN will be able to withstand photosynthesis, scientists have found that a large number of galaxies, particularly those whose centers are supermassive black holes, will be able to withstand this kind of photosynthesis. For example, for a galaxy the size of our own, this region will occupy about 1,100 light-years around its center. As for small, denser ultra-compact dwarf galaxies, more than half of their area will be suitable for photosynthesis, scientists note.

With a new look at X-rays and ultraviolet radiation, the researchers say that in the past, the negative effects of AGN have been significantly exaggerated. Scientists explain that many species of the same terrestrial bacteria are able to create a special biofilm around them that protects them from ultraviolet radiation, so one should not rule out the possibility that life in areas of space with increased radiation also adapts to methods of survival.

The new study also states that gamma and X-ray radiation, which is also actively emitted by AGN in large numbers, will be easily absorbed by the Earth-like atmosphere of the exoplanets and apparently will not have a significant impact on life forms that can inhabit them.

As for the AGNS of our galaxy, then, according to the researchers, the negative effects of its radiation will be significantly reduced already within a light-ray of 100 light-years away from the AGN center.

"If we look at our Earth as an example, we can safely assume that the positive effects of radiation can outweigh its negative effects. For us, this discovery has also turned out to be a true revelation, "Lingam concludes.

You can discuss the news in our Telegram chat.