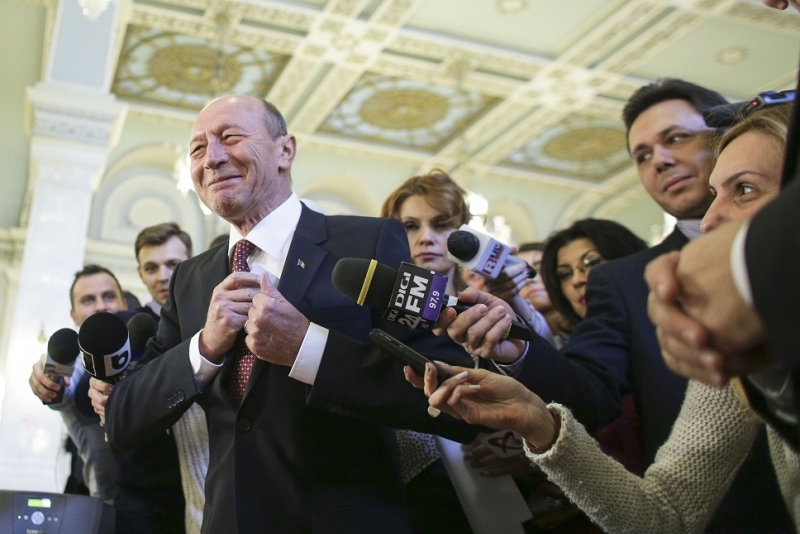 Former President Traian Basescu said on Monday in the debate in the Senate plenary on the draft law on the repatriation of gold that the initiative is "a big mistake" because in a crisis situation Romania will not know how to manage the gold more early London to show you have.

"Linked to the change of law and the law that only 5% of the gold reserve should be kept abroad, I think it is a big mistake. If this law is approved, NBR will be able to keep 5.3 tons of gold abroad as a guarantee I want to look at the reality.It seems to me today that we are above the limits of stability and resources.What is wrong.Please note that there are many international experts who foresee a new debt crisis in 2020-2021. perfectly possible due to the fact that after the crisis of 2008, 2009 the states, instead of reducing the debt, increased them, continuing with the loans. In a crisis situation, we will not know how to run as fast as possible with gold in London to show that we have reservations.My suggestion is to leave the duties of the NBR as they are from that point of view and do not have a political intervention at the moment when it seems to be right, but can knock one night off. "says Traian Basescu in the Plenum, according to Mediafax.

READ OUT: THE GREATER RISK you expose yourself to if you break or break medications to swallow them more easily

Senator Florin Cîtu of the NLP has announced that the Liberals do not support the legislative draft.

"As long as there is no need to see it, everyone knows that it is there." What this law is doing is to intervene directly in the way monetary policy is implemented in Romania In its current form the project is not supported by NLP "said Florin Citu.

Liberal Marcel Vela argued that the adoption of the bill on the repatriation of gold will affect the future of Romania.

"This project is very serious and very important, which will affect not years but decades in the future of Romania." This project will require a major parliamentary and governmental effort to be modified in the future. the government does not tell us that it is good or bad, we have a very serious problem, you are not here as a mere consultant, you are the one who should give us an authoritarian view. Finance in the hall, "said Vela.

Senator USR Eduard Dirca proposed to resubmit to the Commission for two weeks the bill, but the request was rejected by the majority of the plenary.

READ: GREAT ATTENTION during the post: The lack of a vitamin of products of animal origin has serious consequences

In response to opposition statements, Senator PSD Şerban Nicolae said that the repatriation of gold would not affect the credibility of the country, but the official documents do not specify how many tons there are in the country and how many tons are abroad.

"If there were consistent arguments, it would not be necessary for small scammers without subsidence." We are talking about the Romanian gold reserve and we have to be serious.I understand that we have to keep the gold in London to show that we have. that the repatriation of gold would be detrimental to the credibility.40 tonnes of this gold reserve are already in the territory of Romania.In all documents the gold reserve is 103.7 tonnes, there is no difference between the tonnes of the country and the tons of the outside "explained Serban Nicolae.

On Monday, the Senate approved the legislative bill initiated by Liviu Dragnea and Şerban Nicolae, which stipulates that the National Bank of Romania (BNR) will repatriate 91.5% of Romania's overseas deposited gold, ie almost 56 tonnes of gold.