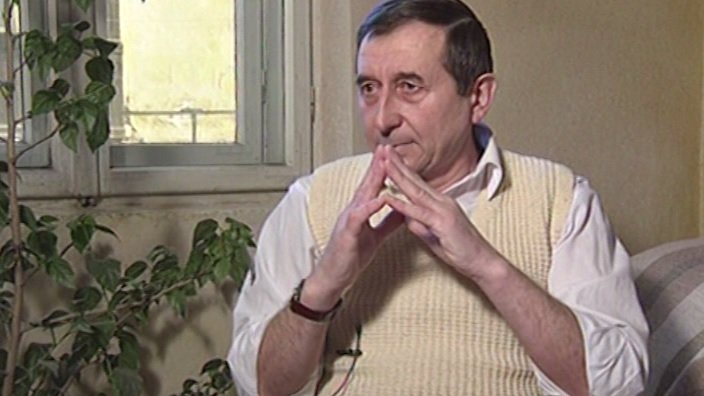 Mihai Gâdea presented on Monday the "Synthesis of the Day", an extraordinary interview with the victim of Attorney General Augustin Lazar, anti-communist dissident Iulius Filip.

Augustin Lazar, then criminal prosecutor for Alba Iulia's Prosecutor's Office, also regularly served on the Aiud Prison Prosecutor's Commission, which examines the situation of all prisoners on parole.

Lazar refused to release the anti-communist dissident Julius Philip, although he had fulfilled the fraction of the punishment that allowed him to parole. The dissident executed more than 1,300 days in prison of the sentence that was condemned in December of 1981, when it arrived at a commission of conditional release of the Penitentiary of Aiud.

Iulius Filip told an interview with TV producer Lucia Hossu Longin about the "Memory of Pain", the terrible drama he lived in the communist cells.

In 1981, Julius Philip sent a pamphlet addressed to Nicolae Ceausescu, entitled "Dream and Hope", which ended with the letters: "Praise, lies and conversations, with them you always took / But now the time has come for its end and Sunset! "

He was arrested between March 3 and 5, 1981, and on March 15, 1981, then Minister of Defense Constantin Olteanu placed him in reserve by Order 51/1981 "for acts incompatible with the status of the military."

Security provided him with a master's degree at a civil institution, provided he became an informant. Because he refused, no job was offered. To support his family, he had to do unskilled jobs, wash blocks, windows, etc.

In 1981, Julius Philip sent a letter of support to the Solidarity Trade Union Congress to Poland with the message. Subsequently, the letter was transmitted by the main press agencies.

The Security Initiative launched an investigation that was accused of "a pact with counterrevolutionary forces in Poland." After the letter was also broadcast on Free Europe Radio, Iulius Filip was sentenced to sentence and sentenced to five years and four months in prison, which he executed in the prisons of Cluj, Bucharest, Jilava and Aiud.

It was also closed in the basement of the Securitate in Bucharest, where it would go through an unimaginable anguish.

One shocking episode was one in which he was admitted to the psychiatric hospital by opponents who are considered fanatical and insane rebels. In the mind of the Securitate, only an alienation could explain the opposition to Ceausescu.

"He puts me in the car and puts me in jail at Jilava Hospital in the Chronicle where people are experimenting with new drugs or neuroparasitic drugs.

I stayed there, I do not know how long, but some inmates who realized what was happening broke a shirt and looked after me. When I started to come back and realize what was happening to me, it looked like a person suffering from Parkinson's disease – I did not control any peripheral limbs anymore: my eyes were spinning in my head in all directions, one hand going left, one foot to the right. We were practically nonexistent. Even if the brain had a perfect record of what was happening, the commands received to the peripheral nervous system could not be reached, "says Julius Philip.