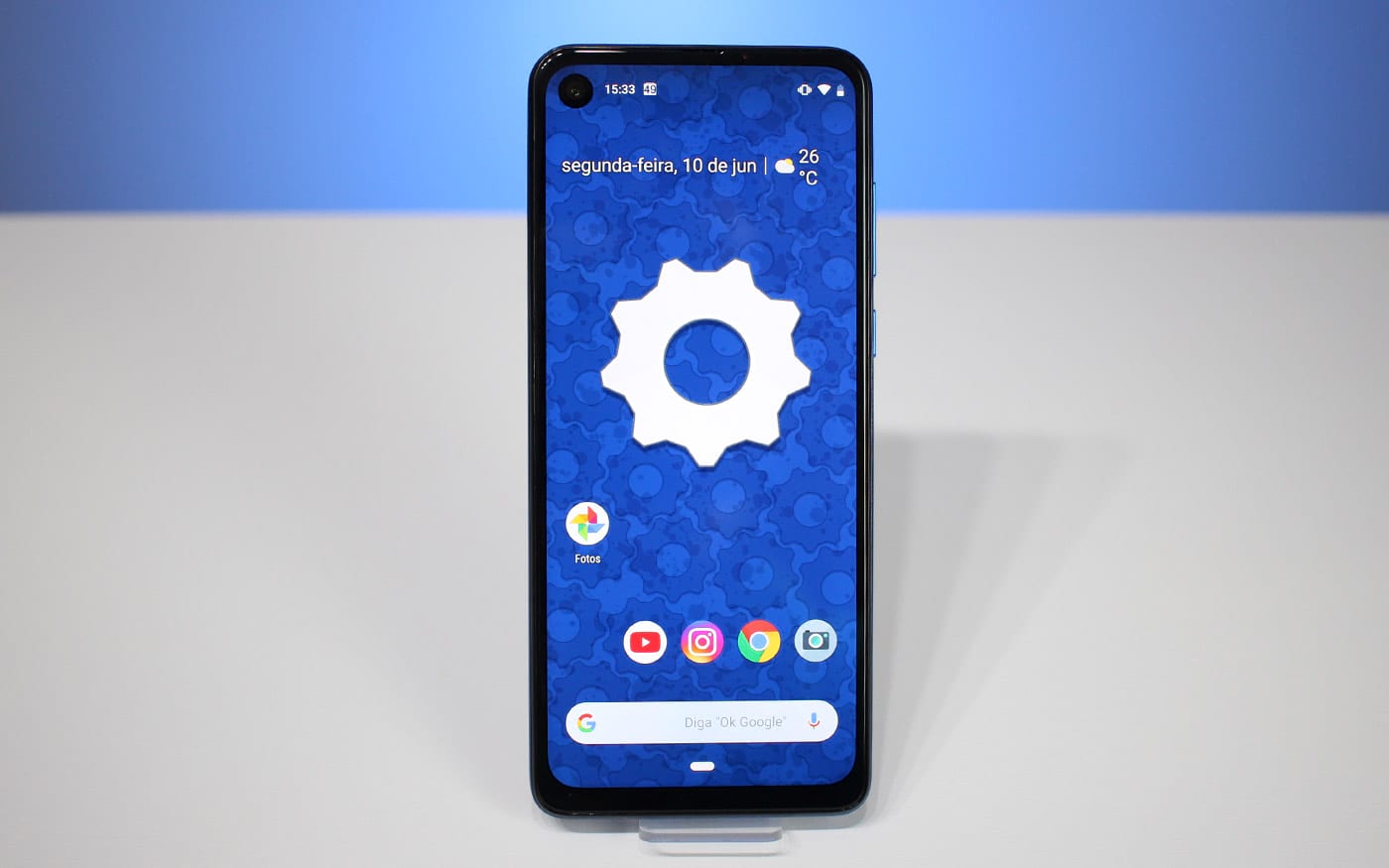 It's time to test the Motorola One Vision, a different line of Motorola handsets, as I mentioned in the review of Motorola One and emphasize on One Vision, these models do not even look like the traditional smartphones the manufacturer produces. Among the highlights of the handset are the 21: 9 widescreen display, notched, but with a hole for the front camera, rear camera with night mode and Android system very clean.

In the review of Motorola One Vision, we will discuss its main characteristics, and criticize the possible defects of the device, finally, to determine if it is worth buying, quoting a final note.

Starting with the design of the device, we received it in blue. It is wrapped in plastic and glass, but this material does not look like glass much, you know, glass. Anyway, let's say it's glass. Ah, inside the box comes a transparent silicone cover, I advise to use, after all the device is thinner and spiked, the finish is quite smooth. I know, these silicone covers are crap and probably will turn yellow in less than a year. But before that you spend about 500 reais to repair the appliance. 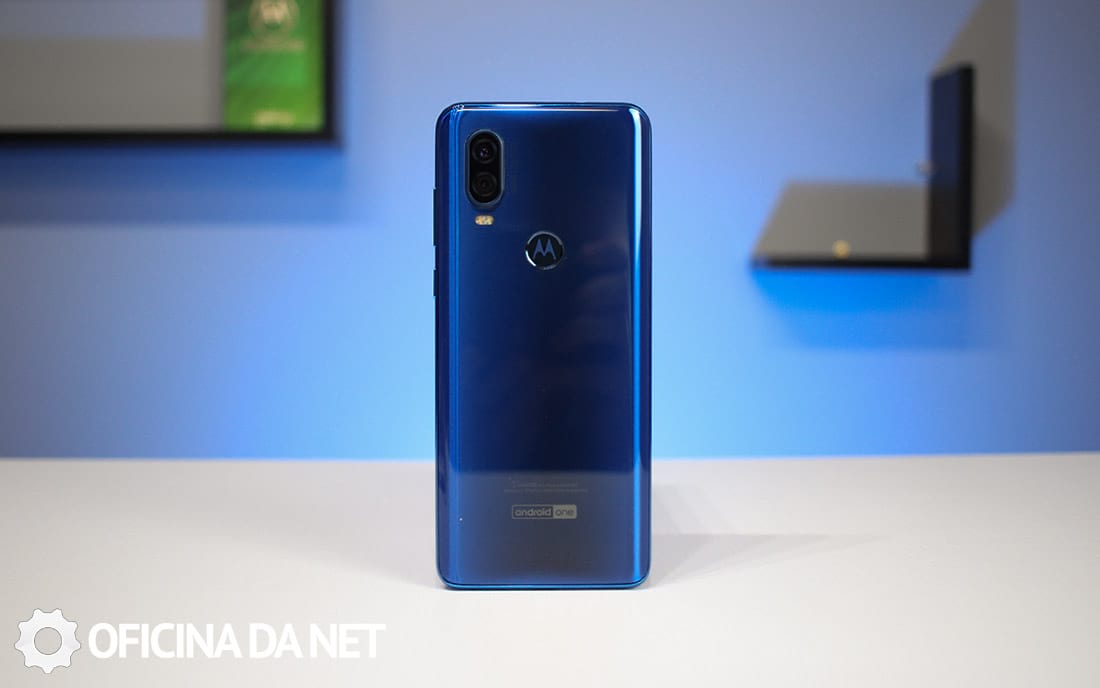 Honestly, I liked his design. It was released a few weeks ago and it bothers me a bit that hole on the screen to contemplate the front camera. Motorola wanted to get away from the traditional 2018 notch by employing something that emerged in 2019 as an intermediate solution between the notch and the completely clean screen. We have seen smartphones like Zenfone 6, OnePlus 7 Pro among others present the motorized camera that comes up and you have there the selfie camera ready to use. We also saw, a few days ago Oppo and Xiaomi bring camera prototypes below the front screen. Okay, Motorola has already released the device and the solution they presented may not be the worst, but this space disrupts, unless the notch is quite true, but it gets in the way. 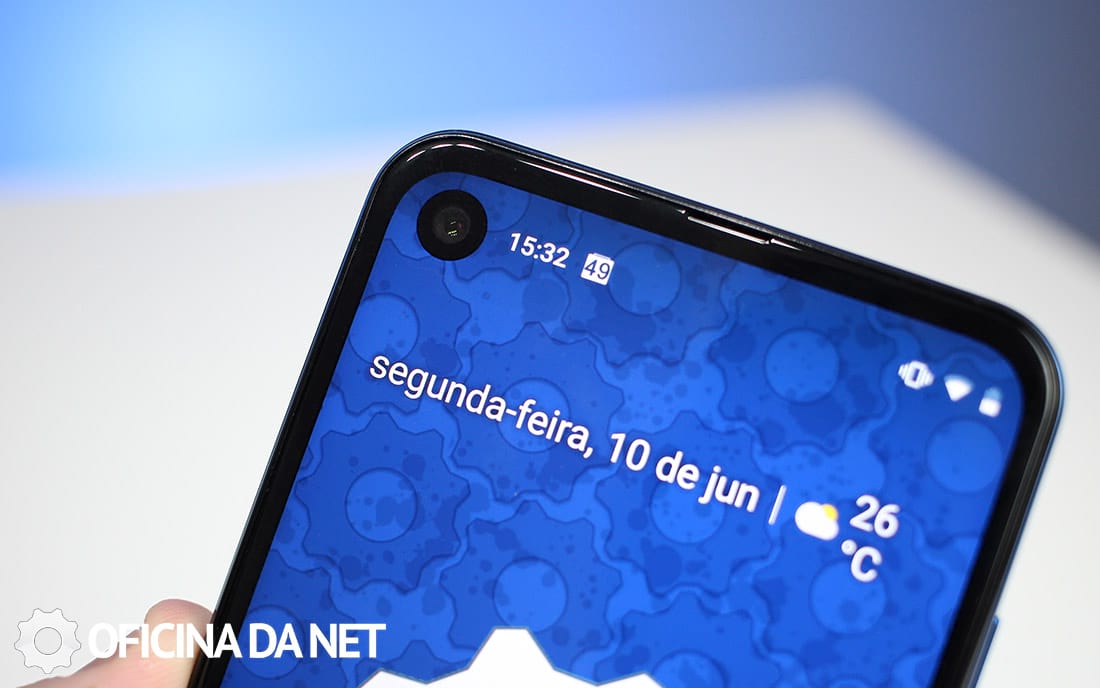 Motorola One Vision hole on the screen

Certainly we will have in a near Motorola One the screen with nothing. And if you noticed, we still have some edges along every edge of the front face.

Already on the back, we have the dual set of cameras, separate from them the dual led flash, still the fingerprint sensor, current best position, when not employed below the screen.

We have the P3 cable on the top and the multimedia sound output on the bottom, along with the USB-C output. I have already mentioned in other reviews, it would be better all the cable outputs together, especially when it is necessary to use charger and headphones at the same time, all the cables are there in the same area.

Have you ever seen a Motorola device using a Samsung processor? That was the first. Exynos 9609, with 4GB of RAM, and 128GB of internal storage. A cool processor with RAM that I consider the least today, and ideal storage to combine cost with benefit.

Is this processor good? In our performance tests, it went well, check out:

You can see that the handset has outperformed direct competitors like Zenfone 5 and more G7 Plus. In the Flat Wheel program here from Oficina do Net, you can see that it also had a good performance, running smooth almost all the games.

This is a strong point of the device, its performance, along with clean software, makes the user experience pleasurable.

The FullHD + screen, 21: 9 aspect ratio is quite stretched, incidentally, had not seen such a smartphone. Motorola calls this screen CinemaVision, due to the proportion of the screen being equal to the new movies shown. However, the CinemaVision screen does not have any industry certification. 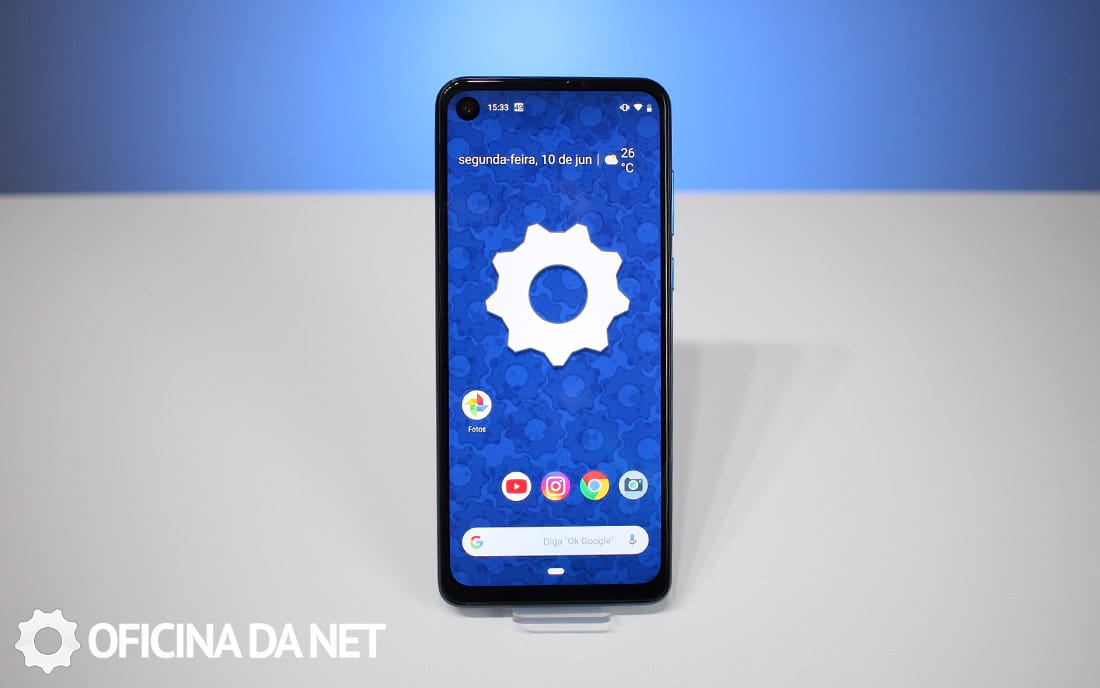 Even so, the colors are quite faithful when the brightness level is high. There is option to choose color mode, natural, highlighted or saturated. It would be basically three levels of saturation.

And Motorola, no, there's no way to use the screen entirely with just one hand.

The Motorola One Vision camera set starts with two 48MP rear displays on the main f / 1.7 aperture sensor, and another one that you can not use has no option but is used to assist the main sensor when taking night shots , when blurred background pictures are taken. This is where the f / 2.2 5MP secondary sensor comes into action.

This is a cool set for a smartphone intermediary, premium intermediary. The 48MP will add 4 pixels to 1, at the end you will have a combined 12MP image. This mechanism is already natural, and the idea here is to add more light and make the photo sharper.

Night Mode: It's a wave that's here to stay. Now all handsets are coming with this feature. Night Vision as it is called, automatically suggests to change the mode when you encounter a scene with a low incidence of light. You will shoot, wait a few moments until the camera captures more information of the moment and combine these moments with your original photo, letting in more light and finally presenting a much clearer image. If you have not seen this effect on a smartphone, you will be surprised by the result. The Motorola One Vision, does not even come close to the Huawei P30 Pro in this issue, we tested it here and you can see the review. But for an intermediary, he is to be congratulated. 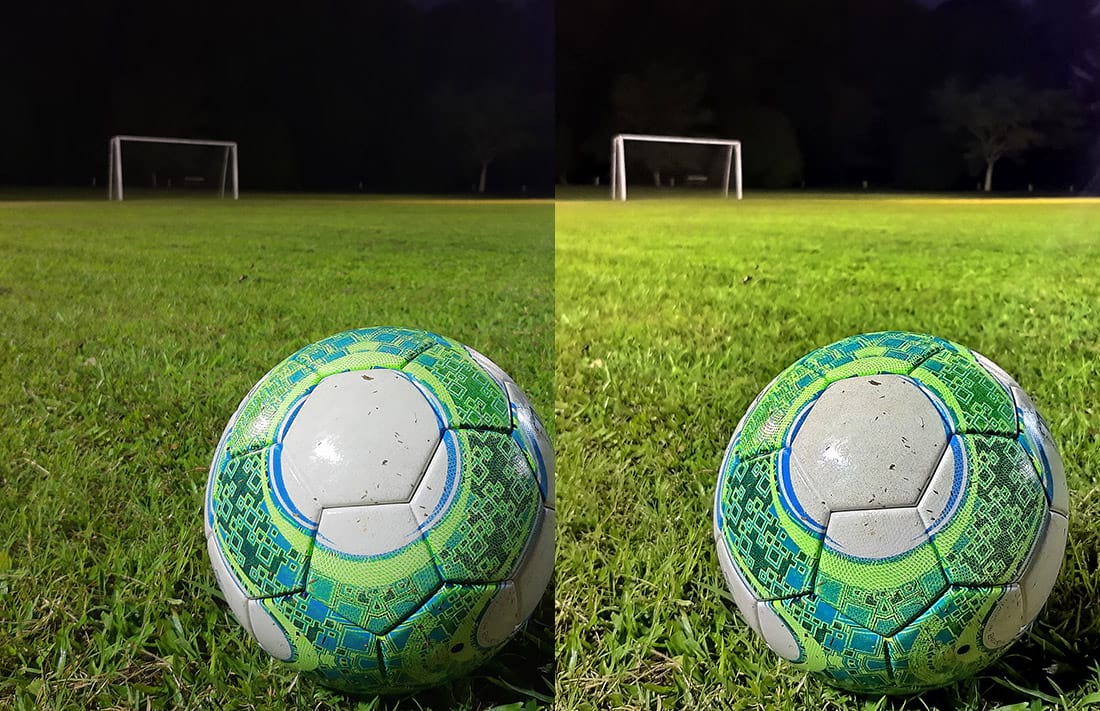 The photos are actually clearer, however, there have been some times when he tried too hard to make the photo clear, applying a lot of sharpness effect. 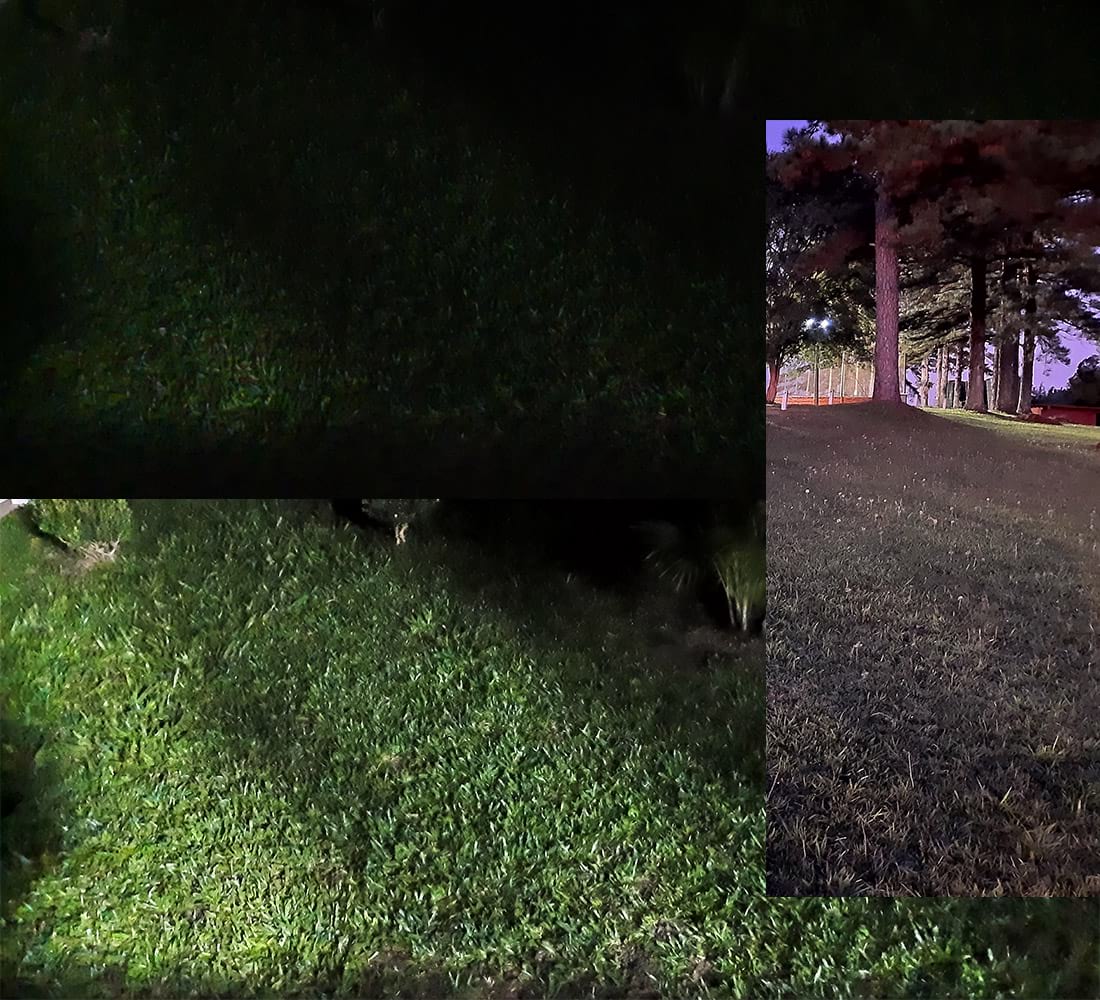 You know, when you learn to tinker with some editing software and change from 0 to 100 in the sharpening menu? It's almost there. But it's not all the photos he does this, usually when the light is too low. 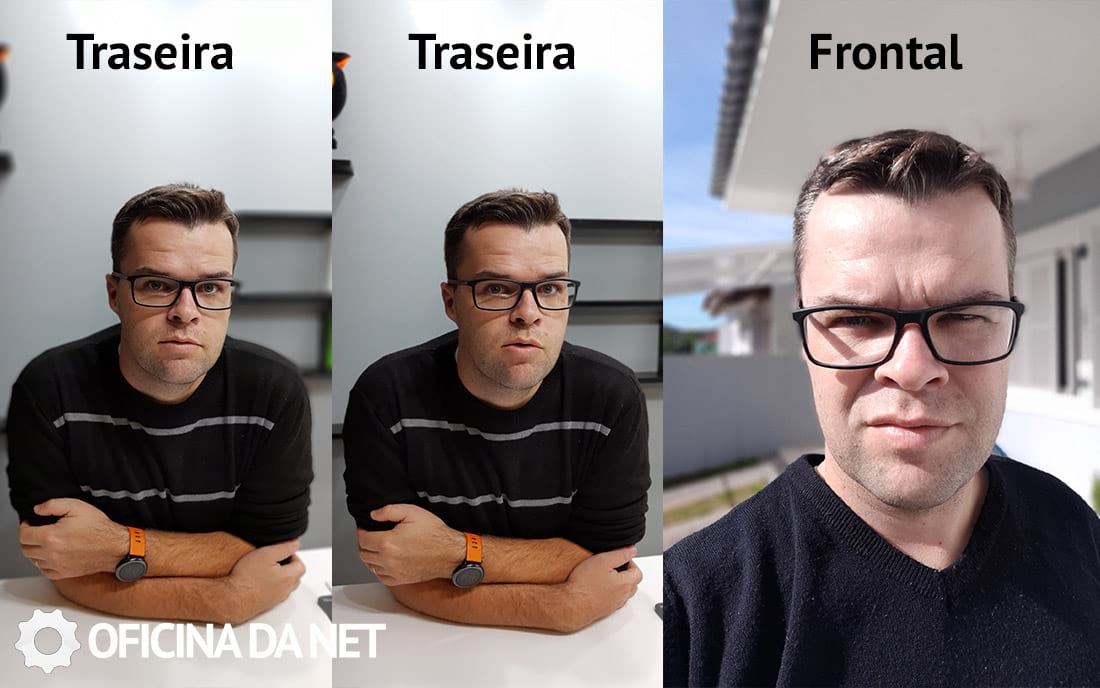 Portrait mode: One Vision also features portrait mode. With the rear camera, it will use both sensors to apply the clipping effect. the 5MP focuses on the background and depth of field, while the 48MP focuses on the person's face. The combination generates the effect we know as bokeh. The front camera is also capable of generating this effect, it applies in a digital mode, simulated by software, does not look as good as the rear set, but it's worth noting. You have the option to choose the background blur level.

The front camera features a 25MP sensor, f / 2.0 aperture makes clear selfies when there is good light conditions. It also compresses 4 pixels into one, outputting a 6.2MP photo.

In general the camera makes good pictures for a device in the price range between 1500 to 2000 real. The colors of the original photo are very close to reality, have enough clarity for the price, good sets of cameras, both rear and front. The cameras is a point that you will like, if you are used to smartphones at this price range. The videos come out at 4K at 30fps, it has 240fps slow motion at 720p.

We need to talk about the battery. Motorola, these 3500mAh battery are not right. The Exynos 9609 processor is very energy-efficient. At no point in the tests was I able to do more than 5 hours of screen, the longest time was 4 hours and 58 minutes. It is okay that for everyday use you will be able to reach the end of the day without having to carry, but I expected more from the 3500 mAh.

Sound: The sound is mono, it has output only on the bottom of the unit. And for a just mono sound, it's good. It is not exaggerated, but it is enough.

Software: You know that it runs Android One, which is the least-modified version of Android. In the case of Motorola there are two, the first, is the camera software that was made by the manufacturer. The second modification is the Moto app, which combines the Moto actions and Moto screen. Two features that Motorola users get used to and miss when they are no longer on the manufacturer's platform.

Updates: As part of the Android One program, Motorola One Vision is guaranteed three years of monthly security updates. In addition, Motorola has guaranteed upgrade for Android Q and R.

The card slot is hybrid, in the first only the operator chip, and in the second you choose or microSD up to 512GB or another chip.

For you who like a smartphone with a clean system, the Motorola One Vision will hit you full, in it you will make photos with quality equivalent to the price, nothing very extraordinary, but also not to be desired. His performance is exalted, the Exynos processor does the job well, and by working well, it consumes a lot of energy, more than it should.

The movie-proportioned screen sometimes gets in the way, I hope this ratio does not become standard, I like the thinnest format of handsets, but in that case it was too much.

My rating for the handset is 7.5, where his strengths are design, camera set, performance and software. The weak points are battery and the hole in the screen. His suggested price came in 1999, dear to the set. Currently found by the range of 1700 to 1800 reais, a fairer price. Check out some offers below: