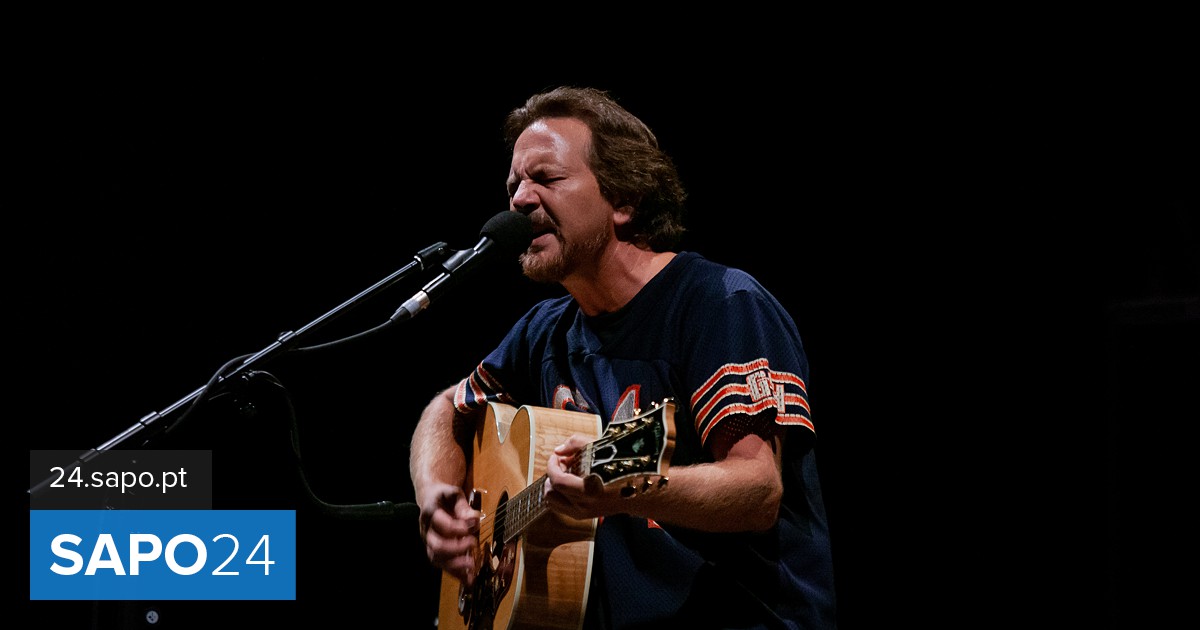 The psychological-or even theological-role that music can have would give a whole other discussion, which deserves to be face-to-face and not in a report on a concert, which after the first readings and sharing will be forgotten. Let us stay within ourselves. For that initial explosion of euphoria and applause when Vedder steps on the stage for the first time, after Glen Hansard (and fabulous Glen Hansard!) Took over the first part, and after the Red Limo String Quartet, string quartet who has been accompanying the vocalist on a tour, has opened up the sound hostilities and has given rise to 'Far Behind', a song included in the soundtrack of "Into the Wild" (2007) and which was his first solo work.

Not that Vedder is better solo than in the context of Pearl Jam (this is up to everyone's discretion), but the truth is this: it's exponentially different. He seems to give more of himself, knowing that he does not have the company of his bandmates, which he did not fail to greet during this concert, by his side. At the same time, it does not seem to matter what may happen, we are talking about glorious moments, like 'Black', intoned by an audience that has rarely been silenced), or 'lamentable failures' (in quotation marks because are truly), such as his attempt to speak a correct Portuguese (reading from the chevrons …) or one or another stumble already after the first of the bottles of wine he swallowed on stage (and offered to those present) is finished.

In its own name, it seems that the untouchable aura of the Pearl Jam is transfigured, annihilated. There is no Pearl Jam or the Pearl Jam songs. There is a person who came to our house and who, as a good guest, showed education, humor, and even entertained us with his guitars, acoustic and electric. That special friend within our circle of friends. That shoulder always ready to let us lay our heads there. The one who always smiles and infects us with that smile, regardless of what is happening in the world.

Among past memories, such as those of the first Pearl Jam concerts in Portugal, in the Cascais Dramatic, in 1996, passing by the presents, like a letter that was given to him by the "traveler" Miguel – to whom he dedicated 'Driftin', Eddie Vedder he was both moved and grateful for the (always) warm reception he received from the Portuguese people (there are those who shout "welcome home!"), even though he knows that his office does not allow him to spend so much time with your family as much as you would like. Who forgives him, because he knows that he also thinks of his audience as an extension of this family. That encourages him, and those who accompany him. Rani Kumar, a member of the quartet, had to wish a happy birthday to his son, from a distance, throughout the day. And Camilla van der Kooij, violinist of the same, could not hide her enormous pregnancy at all …

And there are so many names – and this is proof of familiarity – that we almost forgot about Lara, who was given a glass of wine for her hand, or of Ines, who at first fell asleep and then was equally toasted with a "Congratulations to You ", for the 10th anniversary, sung by more than 20 thousand people inside the Altice Arena (noting more in her a shocker than of rejoicing, but still …).

The intimacy away from the networks is only broken when Vedder breaks his own rules and asks the public, who with more or less shame and with more or less warnings on the part of the staff of the Arena has been snatching some photos so that he can turn on the lights of his cell phones to send a message to America that so many families have divided over the past three years, not just his own or those of the emigrants. 'Imagine', John Lennon's classic, was not without a single syllable to scream, having started with a short stretch of Patti Smith's no less classic 'People Have the Power'. The same for Pearl Jam's 'Smile', shortly thereafter, which could not be missed on the happiest night Vedder seems to have had in a long time.

After playing 'Rockin in the Free World', Neil Young's theme is almost his (as well as 'Hurt' is practically Johnny Cash and not the Nine Inch Nails, for the strength he put in his version), Eddie Vedder makes a bowed and left the stage with a smile on his lips, very pleased to have come once more to a country that loves and loves him. Behind them were two hours of concert and amena cavaqueira, soiree private where the stardom stood at the door. He is not at all a rock or pop star. He's one of us. One of ours. A simple type. Usually these are the ones who teach us the meaning of life; with him it was no different. The meaning of life is to be happy.