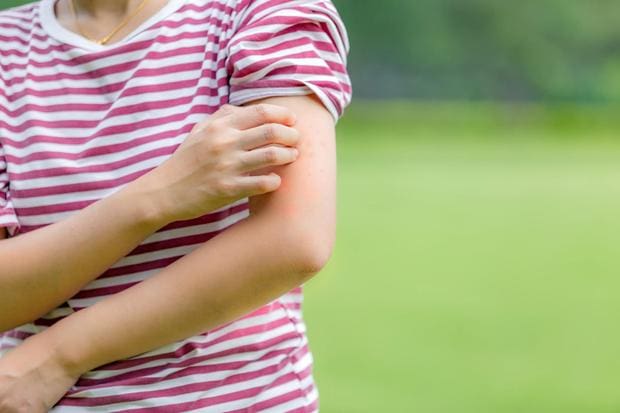 Chronic disease, which affects children and adults, has more severe crises with the arrival of the cold

The arrival of autumn, with its mild temperatures, generates encouragement in many people who do not tolerate the heat. But the opposite is true of those who suffer from atopic dermatitis, a non-contagious inflammatory disease that leaves the skin red with intense itching and scaling on parts such as face, knee and elbows, and whose episodes of crisis, in general, are getting worse this time of year. This is because the disease, incurable, is directly associated with dry skin, which obviously tends to occur more with the low temperature.

But whoever had given only the lack of hydration because of the cold made the problem worse. For those who suffer from dermatitis, the list of reasons seems to have no end: "It's the food, it's the test of new products, or products that I've been using for months, and one day they burn my face, it's the dermatitis ointment to calm down the worse, is the pillowcase, the hot water, the dyeing of the hair, the sweat, the air, being emotionally stressed, stressed, and so many other reasons that I can not even say, "reported the influencer Jana Rosa in Bonita's profile. Skin, about the disease with which it coexists.

The sharing of something challenging for those who work with beauty at least served as a balm to those who also spend years battling the disease. "Those who suffer from dermatitis and allergies can not lower their guard, they have to be alert. I always consult with a dermatologist at least once a year, or in case of a strong crisis. I'm on anti-allergic pills, because I never know when I might have a crisis, "says counselor and businesswoman Yumi Miyake. She discovered the disease in childhood, when she went to the hospital full of blisters on the arm, and knows that in her case, it is associated with allergies and family history.

Preconception. Dermatologist Lucas Miranda teaches that these are indeed factors linked to atopic dermatitis and that the first symptoms usually arrive in childhood. "The prevalence of the disease in children, aged around 6 and 7 years, is 7%," he says. According to the Brazilian Society of Dermatology (SBD), up to 25% of children can present episodes of the disease and up to 7% of adults can be affected.

"It is not known exactly what the causes are, but factors have already been raised in the medical literature. What is well sedimented is that there is a strong genetic relationship, it is known that there is also a relationship with the skin type, and the dry one is more prone. And also that children with personal or family history of problems such as rhinitis, asthma and bronchitis are more prone, "he explains.

However, even those who do not have cases in the family may have the disease, and then the problem of misinformation accentuates anguish. This was the case of student and singer Juliana Tostes. "In my city (Barbacena), I did not find anyone who had the disease and, in my family, nobody has. It was hard not knowing how to deal with her alone, "she recalls. Because of this, she set up a Facebook group on the topic. The idea, he says, was to find a few people to talk about it: today there are 19,000 members.

With little concrete information about dermatitis, the space for prejudice is open, a problem as serious as the disease itself. "He suffered more as a child and as a teenager because it was the worst season and with apparent injuries. Once, a school boy asked, mockingly, if I chewed my fingers because they lived with wounds. I was very annoyed. Today, I no longer see as prejudice, but curiosity: the person who does not know the disease looks at me crooked, thinking that it will 'get', "says Yumi. "It's uncomfortable because they keep asking questions and they do not always have empathy, they get disgusted," Juliana laments. For the dermatologist Gisele Viana, from the Brazilian Society of Dermatology – section MG, the information helps to minimize suffering. "I have had to issue certificates to schools for people with these stigmatizing skin diseases. I see the suffering of families, but I believe that awareness can help minimize it, "he says.

Which is? A genetic, chronic disease that causes dry skin, itchy rashes and crusts.

What causes? It is not known exactly, but there are risk factors for development, such as allergy to pollen, mold, mites or animals; contact with rough materials; exposure to environmental irritants, fragrances or dyes added to lotions or soaps, detergents and cleaning products in general.

Is it transmissible? It is not a contagious disease. You can touch the lesions at will so there is no risk.

Treatments. The main one is the hydration of the skin.

Moisturizing the skin is the recommendation

Living with atopic dermatitis is dealing with itching and low self-esteem by the appearance of the disease. But dermatologist Gisele Viana, a member of the Brazilian Society of Dermatology, explains that daily care can minimize the episodes of crisis. "The main thing is to avoid hot and long baths, do not rub the soap, which needs to be neutral (it suggests using it only in the intimate parts) and make use of emollients to moisturize the skin. The sun can also be a great ally to improve, although we have patients who report a worsening with sweating, "he explains. In addition, she recommends avoiding products with fragrances.

After years buying various products, Yumi Miyake decided to study the area. "The need for information due to atopic dermatitis has led me to natural cosmetology, and today I created a handmade brand, with a friend, Amana Cosmetics," he says.

For journalist Deborah Morais, not stressing is also fundamental: "I try to keep control and calm, and always moisturize the skin," he says.

In crisis episodes, it may be necessary to use corticosteroids and even antibiotics. This month, a new immunobiological drug has arrived in the country and promises to help in severe cases of the disease. "These are very advanced medicines. The person takes an injection in the month or week. However, they are indicated for serious cases, "says Gisele.

The doctor also makes a reservation regarding the self-medication or indication of laymen: "There are many skin diseases with similar symptoms. The doctor, preferably the dermatologist, is the one who can identify what it is, "he says. "In the case of self-medication, there is still the problem that many doctors give rise to a rebound effect," he warns.

Despite reports, stress would not be tied to problem

Whoever has atopic dermatitis will probably manifest the early symptoms even baby. For some, the stage of childhood and adolescence will be even more serious, but over time, crises may decline considerably – even though the cure for the disease does not exist.

"In general, in the baby, it manifests in the face, especially in the outer areas, in the frame of the face, let's say so. In children slightly older, from 6 months to 1 year, atopic dermatitis manifests mainly in areas of folds, neck, anterior region of the elbow, posterior region of the knee, with a lot of itching, small vesicles or crusts ", reports the dermatologist Lucas Miranda.

Advisor and businesswoman Yumi Miyake remembers going to several doctors as a child, and remembers what she heard: "They said that in adulthood it was going to get better, and really improved a lot. I do not always have an apparent injury today, only in the crises – but the frequency is still high, but now I know how to handle it better. Stress influences 100% (for the disease in it): I suffered a family loss recently, and a crisis occurred that attacked the inside of the arm and neck, and it took weeks to heal, "he says.

Emotional. Journalist Deborah Morais also notes that the emotional issue greatly interferes with her health. "When I'm more worried, nervous, she really attacks, especially on the face. My crisis episodes are linked to stress, the eve of some event I'm working on, something important. As a teenager, even if it was something good, like a trip, my face would blister, "he says. Student and singer Juliana Tostes chants both: "By my 10 years, my father died and was triggering the allergy, increasing and took the entire body. Nowadays, stress is very 'important' in my dermatitis: on account of college, something that is going to happen and I get worried, I start to scratch myself a lot, "she says.

However, despite the similar reports, the dermatologist Lucas Miranda affirms that there is no proof that stress and emotional factors are, in fact, related to the disease. "The main factors are those that dry the skin, like in the winter, when people take long and hot baths, with inadequate soaps, and they use bushings. With regard to stress, there is no evidence, although clinically we noticed some evidence that this happens, "he says. He also points out that there are also no references that link disease to food. "There is nothing to justify the restriction of food groups in people with atopic dermatitis," he says.