Fifty years after the famous "ask the word" of the then president of the General Direction (DG) of the Academic Association of Coimbra (AAC), Alberto Martins, the same room of the Department of Mathematics of the University of Coimbra (UC) this morning, to welcome the ceremony evocative of the 50 years of the Academic Crisis.

The current president of the DG / AAC, Daniel Azenha, the mayor of Coimbra, Manuel Machado, the rector of the UC, Amílcar Falcão, and Alberto Martins recalled this historical moment of the student struggle against the dictatorship and celebrated, with the present public, the values ​​of freedom, solidarity and democracy.

It was up to the current president of DG / AAC, Daniel Azenha, to give the floor today, which was not given in 1969, to Alberto Martins.

And Daniel Azenha did not hide what he felt: "I was afraid to think of the moment that happened in this room." And it was with the standing room, to applaud, that Alberto Martins moved to the rostrum.

The story was told, first hand, by the protagonist and there was a retreat of 50 years in time. Alberto Martins recalled the country in 1969, "poor and illiterate," the dictatorship and colonial war, the student struggle, the inauguration of the Department of Mathematics of the UC and "ask the word", the night of April 17, the burden police, students' persecution, the Magna Assembly, the strike to classes and examinations and the Portuguese Cup final between Académica and Benfica. "We had to get back to the destination and we gave. We came back to the destination with emotion, with rationality, with creativity and a sense of responsibility, "he said, excited.

Between references to his "old and dear friends of 1969", the "true workers of the resistance of the students to the dictatorship", as he said, and details of the academic crisis that led to the 25 of April of 1974, Alberto Martins also spoke of the importance of not forgetting the past and of what remains to be done in the future. "Only understanding the past gives us the ability to dream and build the future. There is a celebrated philosopher who says "the past is full of futures that have not been fulfilled." The past of 1969 has a set of futures that have been fulfilled, freedom, democracy, the end of war, but there is also a dimension of dream, of improvement, of solidarity, of humanity, of fighting inequalities that is a heritage of 1969, which we all have to help to fulfill, "he concluded his speech, under the excited looks of the audience, which rose again for a standing ovation to the president of DG / AAC in 1969.

The president of CM Coimbra spoke next and stressed the "boldness" of all the players involved in this student struggle. "In the Academic Crisis of 1969, which challenged a dictatorship, then with more than four decades, what emerged was boldness. The boldness of gestures, the boldness of words, the audacity to try to speak, to make the voice of the need for change heard, "defended Manuel Machado, who considered Alberto Martins' speech" one of the shortest and most effective political speeches in history ".

"The audacity, the courage, the detachment to the daily comfort, the ethical duty to fight for a better society, the love for freedom," added the mayor, arguing that the "I ask the floor" contained everything. "From then on, the bulk of the process that led to April 25 was under way. The country, the Portuguese people, asked for the floor. And he did not stop asking until they gave it to him, "concluded Manuel Machado.

And it was when the rector of the UC was called to close the speeches, that he was asked to speak. Décio de Sousa, president of the AAC Magna Assembly in 1969, asked for the floor to recall what this same assembly was, "a true lesson of civility and democratic spirit" and to make an Emferreá, executed by all they were in the living room.

The interventions then ended with the address of the Rector of the UC, Amílcar Falcão, who thanked "all the students who, in the voice of Alberto Martins, asked for the floor in 1969" and defended that this example "should be remembered forever, so that no one will forget the dictatorship and the intervention capacity of the students ".

The ceremony evocative of the 50 years of the Academic Crisis counted on the full room and the presence of the most diverse personalities academic, political, civil and military. 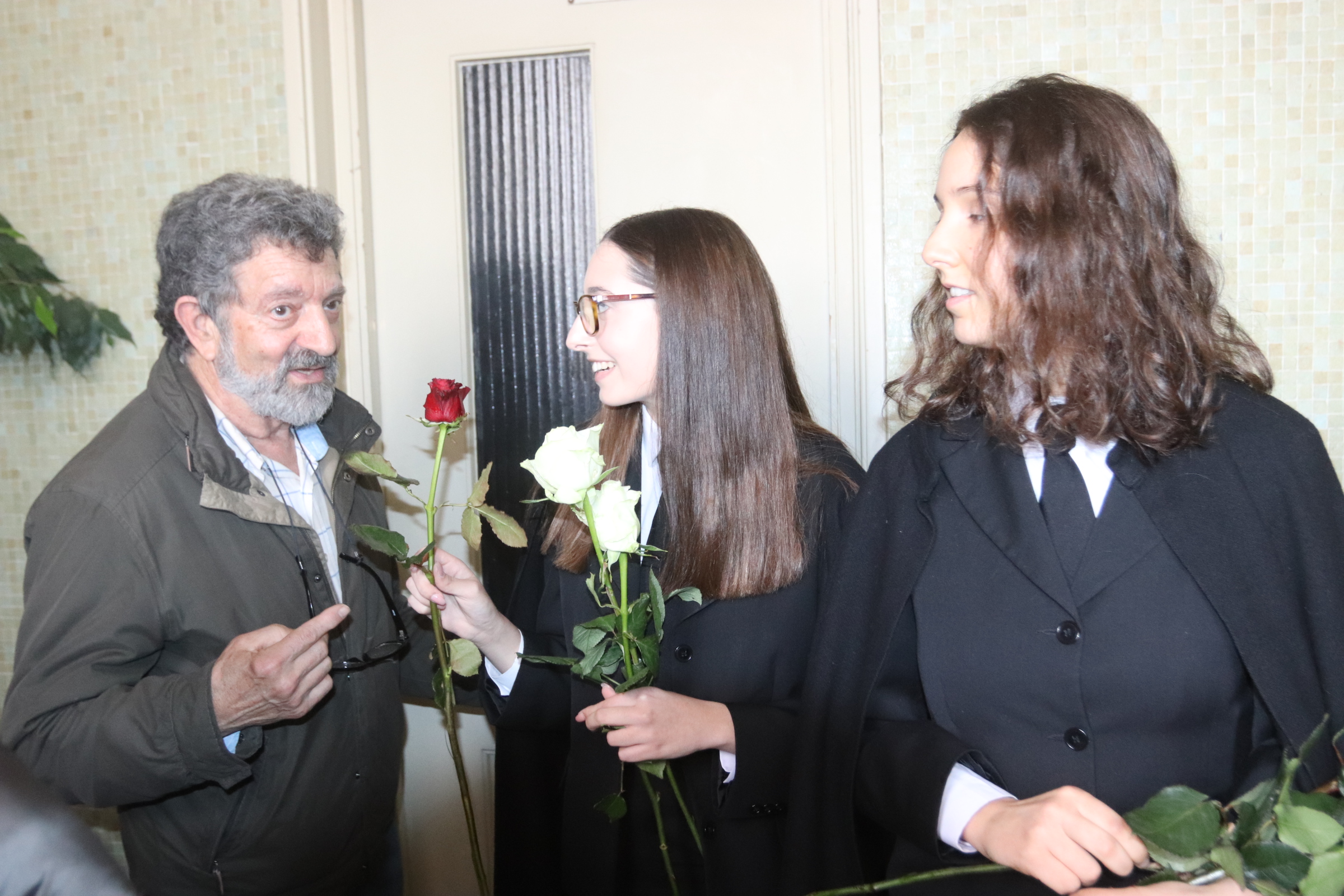 After the ceremony, flowers were distributed, in an allusion to the flower operation, the sculptural set "Peço a Palavra", by Carlos Ramos, which was next to the Monumental Stairs, was presented, followed by the plaque evocative of the 50 years of the Academic Crisis, in the AAC building.

The program of commemorations of the 50 years of the Academic Crisis, which has the organization of AAC, also counting with CM Coimbra and UC, and the partnership of the Inatel Foundation and the Tourism of the Center, can be consulted here.

Watch the video from the NDC Direct: