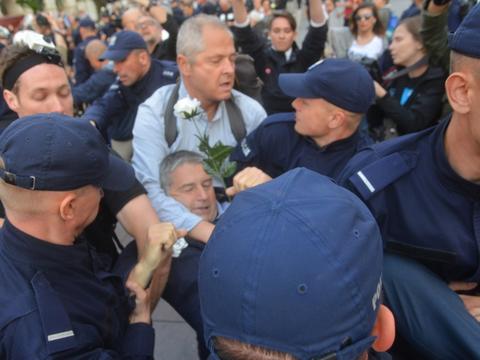 Before the court, the prosecutor read the indictment. It is the violation of the inviolability of two police officers during the performance of official duties – pushing their hands, pushing and kicking one of these policemen. The indictment was sent in June to the District Court of Warsaw-Śródmieście. The accused can face up to three years in prison.

"I do not admit guilt," said Frasyniuk, who at the beginning of the process agreed to the publication of the name and image. He emphasized that "this is not a process of hitting cops or kicking the legs, it's not a process of using offensive words like the constitution." "This is a process that intimidates citizens who defend freedom and the right to assembly," he added.

We suggest that: I feel like in martial law. Lech Kaczyński would be on our side

He assessed that the prosecutor in this case "serves to ruin the rule of law." "I did not kick a cop, it's a completely false and fabricated fact," Frasyniuk said. He noted that his behavior of June 10 last year can be described as "passive resistance".

As the prosecutor's office points out, police officers observing the order during the Smolensk march intervened with Frasyniuk and escorts who blocked the legal march while sitting on the street.

Frasyniuk resisted violently, kicked his legs, screamed, and reacted aggressively. Taking him off course, he kicked one of the cops, violating his bodily inviolability. He also behaved aggressively after leaving the middle of the street, invading the policemen who tried to identify him. An officer who called him to comply with the law, pushed sharply, violating his body integrity – said prosecutor of the District Attorney's Office in Warsaw, Łukasz Łapczyński, when the indictment was presented to the court.

The Warsaw regional court overturned another Frasyniuk case dismissal in early October, which is accused of imposing a blockade of the Smolensk march on June 10, 2017. The District Court will address the matter again.

However, at the end of August, the district court invalidated Frasyniuk in one of the incidents related to the incidents on June 10, 2017. Frasyniuk was charged with conspiracy against the officer "on the identity of his own person." Frasyniuk, at the time, as a police officer, introduced himself as "Jan Józef Grzyb".