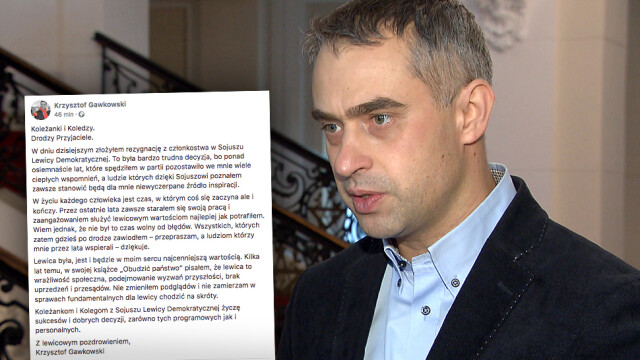 Krzysztof Gawkowski, the vice president of the Democratic Left Alliance, said on Tuesday he would step down as a party member. Commenting on his decision, he emphasized that in his opinion, "Robert Biedroń is today the greatest hope of Polish politics" and expressed interest in cooperating with him.

In the years 2012-2016, Krzysztof Gawkowski was general secretary of the Democratic Left Alliance and, as of January 2016, he was vice-president of this party.

The decision to resign from the SLD was announced on Tuesday through social media.

Advisers of PiS, SLD and …

"Today I resigned from the members of the Left Democratic Alliance, it was a very difficult decision because more than eighteen years I spent at the party left many warm memories in me and the people I met thanks to the Alliance will always be an inexhaustible source of inspiration for me, "said Gawkowski.

"In every person's life there is a time when something begins, but it also ends." In recent years, I have always tried to serve my left values ​​with my work and commitment, but I know it was not a time free from mistakes. So, somewhere along the way I failed – I'm sorry, and thank you for the people who have been supporting me for years "- wrote Gawkowski.

"The left was, is and will be in my heart the most valuable asset," he added.

In the life of every human being there is a time when something begins, but it also ends. Today I resigned from the association @sldpoland The full statement is available https://t.co/xHc3emH5Xw

After the election, he spoke about the need to integrate the left

Asked after the first round of local government elections, if the SLD lost, Gawkowski replied that it is a result that "leaves much to be desired," although "this is definitely not a failure." – SLD must settle for this election, or it will not move forward, – said the Alliance politician.

– If we want to move forward, we need to start integrating left-wing circles, not just talk about their integration – this is the first mistake. Second, not only direct the voice of the program to the elderly, but also seek answers if we do not have an offer for the young and middle generation, who will decide that there will be better results – he emphasized.

– We should try to build a block on the left, which will go to these elections under an electoral committee electoral banner. This can be a new name, a new initiative. I'm not afraid of that. I do not have to run under the SLD name to fight for the left's support – he added. In such a bloc, according to Gawkowski, one can combine various political forces, such as the Razem party, the Greens party and the SLD.

About Biedron: the greatest hope of Polish politics on the left

– I am able, as Krzysztof Gawkowski, to raise my hand in the party council in order to give up the party signal, not to start in the European elections under the SLD flag only under the new flag so that the left in Poland has not 6, and 16 or 26 percent – said the politician at the end of October.

– We made an appointment …

– If someone is connected to the SLD signal, it means that they are making a strategic mistake. He thinks about being in the European Parliament for a signal, not an idea, "Gawkowski said.

He added that "the greatest hope of Polish politics on the left side" is currently Robert Biedron. "You need to talk to him," he emphasized. – There is no more progressive policy, more fresh and at the same time more capable of attracting a new electorate. If Robert Biedron felt such an element of a community project, it would be very good. (…) He has roles to be a leader, "he pointed out.

He echoed the opinion on Biedron as the biggest political hope on Tuesday after the decision to leave the SLD was announced. "It's not like I'm after a few conversations or before I talk to Biedron," he said quietly. If he wants to cooperate, I do not close any doors, but these are Roberta's decisions, not mine, "he noted.