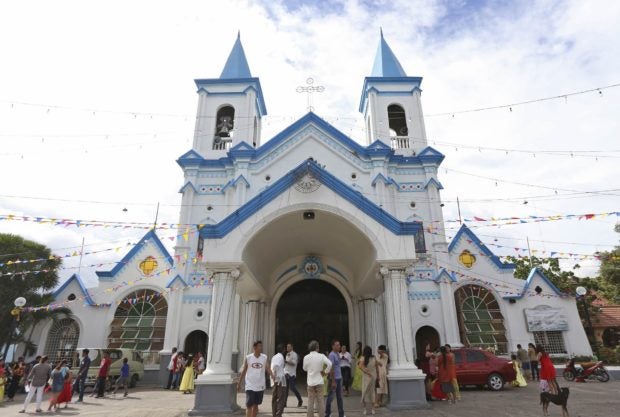 ONE OF THE FAVORITES Parish Church of the Sacred Heart of Mary in Minglanilla, Cebu Province. JUNJIE MENDOZA

CEBU CITY – These sacred days see the faithful going from one church to another.

According to Catholic tradition, many Cebuans visit a church or visit the church on the night of Holy Thursday to commemorate the agony of Jesus in the Garden of Gethsemane and his subsequent imprisonment.

They visit and pray in seven churches (at least), a practice introduced by the Spanish settlers 450 years ago. The tradition was primarily intended as a means to honor the Blessed Sacrament, which is placed on the Altar of Rest on Holy Thursday.

There are a number of churches in Cebu, but seven churches in the south are considered favorites by those who practice the Church Visitation.

The pilgrimage begins in the city of Talisay and ends in the town of Sibonga, 53 kilometers from the city of Cebu.

The first stop is the Parish Church of St. Teresa of Avila in Talisay, the gateway to the south of Cebu. Construction of the church began in 1836 and was completed in 1848. Made of finely cut coral stones, the church was originally cruciform with a main nave and short transepts and semiround.

After having been badly damaged during World War II, the church was restored in 1950 with a Greco-Roman design.

Capped twin massive bell towers with red domes flank the facade. The interiors, especially the presbytery and transepts, are heavily embellished. There are a total of five altars, including the main one, each gilded and holding a statue of a particular devotion.

The next stop is the Parish Church of the Sacred Heart of Mary, in the adjacent city of Minglanilla. The pink church sits on a raised plain overlooking the town square.

It is a contemporary concrete cruciform structure with two bell towers dating back to the pre-war period. Paired steeples are a later addition.

The church has been expanded on both sides over the years. Many of the interiors are contemporary. Windows with stained glass images of the Virgin Mary adorn the right and left transepts.

From Minglanilla, the faithful go to the Parish Church of San Francisco de Asis in the city of Naga.

The church became independent on June 12, 1829, under the defense of St. Francis of Assisi. As in the Church of the Sacred Heart of Mary, there is a main altar and four sides, each with a statue of a particular devotion.

The main altar is a large neoclassical structure with a canopy and the statue of St. Francis of Assisi embracing the Crucified Christ. Each of the two side altars has a tabernacle.

From Naga, the next stop is the city of San Fernando and its centenary Parish Church of San Isidro Labrador.

The church was established by diocesan decree on January 19, 1858, with San Isidro Labrador as patron.

The interior is basically contemporary, a product of renovation done by Mons. Constantino Batocoy in 1972, with the exception of two large windows at the end of the nave that retain their Gothic character.

The church's two-storey convent, which retains much of its coral character on the ground floor, was converted in 1945 to Notre Dame College, which still exists.

The pilgrimage continues until the church of Santa Catarina de Alexandria, in the city of Carcar. 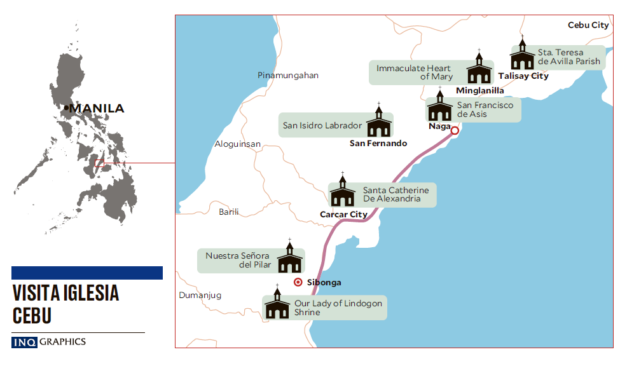 It was built in 1860 under the leadership of the priest. Antonio Manglano and was completed in 1875 by Fr. Manuel Fernandez Rubio, builder of the parish church of stone and wood.

The church, of Greco-Roman design, is an elongated rectangular structure with a main nave and two side corridors.

Horizontal lines divide the facade into several segments. The upper part contains the pediment and the twin towers which are covered with onion-type domes similar to the Eastern European religious buildings. A huge recess arch occupies almost two-thirds of the height of the facade and resembles the iwan of Middle Eastern mosques.

The last stop is Sibonga, where two churches are worth the visit.

The Nuestra Señora del Pilar Church in Barangay Poblacion was the first church in the city. It was originally built with lightweight materials because it was supposed to be temporary. It was replaced by the current structure in the 1980s, its building built with coral stone.

Twin towers flank the main entrance. The archway of the church's portal is gothic, pulling its eyes upward despite the rather impassive appearance of the bell towers, whose lower-level semi-Gothic windows are covered with decorative cement blocks.

The pediment above this arch has a rose window, typical of Gothic architecture.

The other church is the Shrine of Our Lady of Lindogon at Barangay Simala, which sits atop a hill with a spectacular view of the mountain.

A popular destination in the south, the castle-like church has become a haven, with many devotees claiming to have experienced miracles from God through the intercession of the Blessed Virgin Mary.

It is not a tourist activity

While the faithful prepare for the Church Visit, Fr. Brian Brigoli, president of the Archdiocesan Commission of Cebu on Cultural Heritage, has a word of advice.

"This is not a tourist activity. We do not go to churches just to walk around. We make Iglesia to pray, "Brigoli told the Inquirer. "This is a form of spiritual exercise, a part of sacrifice and mortification. When we go to the churches, we must keep in mind the intention to pray. "

At San Carlos Seminary College, where Brigoli served as a teacher, he said that they organized what they called the "Bisikleta Iglesia", in which the pilgrimage is conducted by cycling on a route that covers the seven churches.