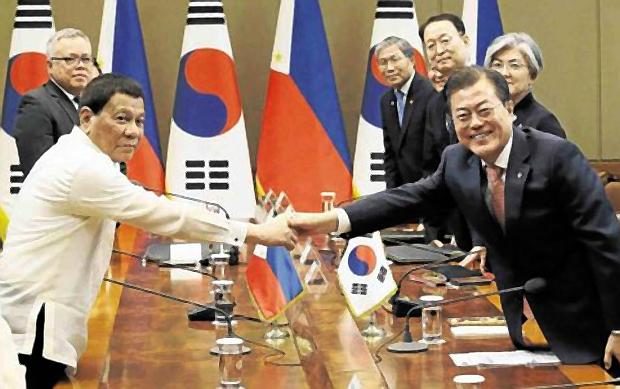 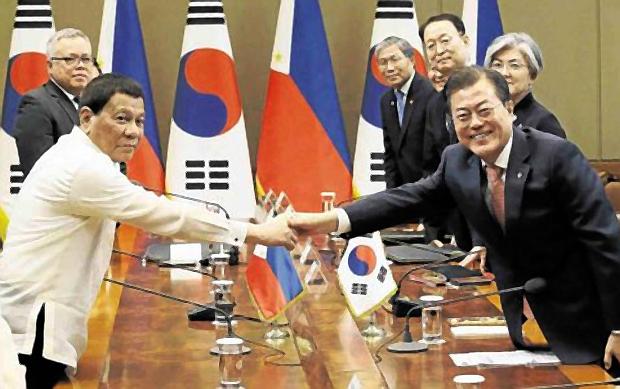 President Rodrigo Duterte and South Korean President Moon Jae-in meet to discuss the renewal of ties between the two countries at the Blue House in Seoul on Monday, June 4, 2018. Both countries are marking 70 years of relations in 2019. (AFP archive)

MANILA, Philippines – The Philippines and South Korea want to conclude a free trade agreement by November, a move that will ease local bananas, among other goods, into the Korean market, officials said.

In a joint statement issued last week, trade chiefs of both governments said they agreed to "put their best efforts" to complete the talks in November.

The conclusion of the talks, they said, would be in time for the commemorative summit of the Republic of Korea (ROK) and the Association of Southeast Asian Nations (Asean).

That same month will also mark the 70th anniversary of South Korea and the Philippines' diplomatic relations, the Commerce and Industry Department (DTI) said in a separate statement.

Prior to that, the Philippines had relatively better access to the market for South Korea through the Asean-Korean free trade area, which came into effect about a decade ago.

On the other hand, the Philippines imported $ 11.16 billion worth of products last year, up 31.9 percent from $ 8.47 billion in 2017. South Korea was the third largest import market from Philippines. DTI said that the Philippines mainly imports industrial products from South Korea.

The Philippines will take advantage of earlier and ongoing negotiations, including prior consultations on access to bilateral markets, the UN Under-Secretary for Commerce, Ceferino Rodolfo, told In a telephone interview.

In how long the FTA will take effect is yet to be seen. If negotiations end in November, this will be the second bilateral FTA in the Philippines, following Japan more than a decade ago.

For now, the obstacles to Philippine exports still remain. For example, Philippine bananas currently receive a 30% tariff in South Korea.

Although the Philippines is South Korea's largest banana supplier, its 85 percent market share is under threat, as Central American countries, which enjoy zero tariffs on their exports, are starting to increase their share, according to a statement. producers of the Pilipino banana. and Association of Exporters (PBGEA).

"This is one of the tangible benefits [we’ll be getting from the FTA], Said Under-Secretary of Commerce Ceferino Rodolfo to INQUIRER, referring to easier access to the market for Philippine bananas.