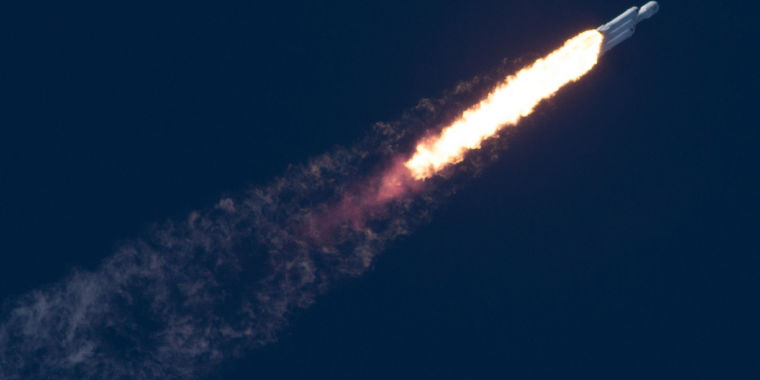 On Monday, NASA administrator Jim Bridenstine held a prefecture for agency officials to begin talking about how they can return humans to the moon by 2024. This was the goal set by Vice President Mike Pence last week during a speech on space policy in Huntsville, Alabama.

The discussion was short in detail until Bridenstine was asked why an idea of ​​using private rockets to launch the Orion spacecraft on a test flight with no return around the moon was impractical. The administrator replied that the agency had analyzed a variety of options using the United Launch Alliance's Delta IV Heavy rocket, SpaceX's Falcon Heavy rocket, or (perhaps most intriguingly) a combination of the two.

"By the way, I was for that, because the visuals would be beautiful," said Bridenstine. Unfortunately, none of these options actually worked for a mission in 2020 due to a variety of reasons. This included the availability of Delta IV Heavy rockets, launch bar issues, and Orion's lack of ability to independently couple to the upper stage of an orbiting rocket.

However, Bridenstine exposed a scenario that has huge implications, not for a launch in 2020, but later. Until now, it was thought that only the NASA Space Launch System could directly inject the Orion spacecraft into a lunar orbit, which made it the preferred option for bringing the astronauts to the moon in 2024. However, Bridenstine said there were another option. : a Heavy Falcon rocket with a provisional cryogenic propulsion stage built by the United Launch Alliance. "Talk about strange comrades," he mused over the two rocket rivals.

This plan has the ability to put humans on the moon by 2024, Bridenstine said. He then emphasized – twice – that NASA's chief of spaceflight, William Gerstenmaier, has yet to bless this approach because of a number of technical details. Your reservations include the challenge of integrating the Falcon Heavy rocket into a horizontal position and then loading the Orion with fuel in a vertical setting on the launch bar. The Falcon Heavy would also require a larger fairing of cargo than it usually flies. This would put an uncertain tension on the boosters mounted on the side of the rocket.

"It would take time [and] cost, and there is risk involved, "Bridenstine said. But guess what, if we are going to land boots on the Moon in 2024, we have time, and we have the ability to take some risks and make some modifications. All this is on the table. There is nothing sacred here that is off the table. And that is a potential capability that could help us land boots on the Moon in 2024. "

With this comment, Bridenstine broke a political taboo. For the first time, in fact, a senior NASA official opened the door to NASA, which flew its first manned missions to the Moon on a Falcon Heavy rocket built by SpaceX. An employee of the company did not immediately respond to a request for comment.

There are, of course, considerable caveats to consider here. On the one hand, Bridenstine said that the SLS rocket, with its higher launch capability, is still the agency's preferred option. But the rocket's first launch was postponed until at least the end of 2020, and there is no guarantee it will be ready to fly there.

There is also the question of Gerstenmaier, who was sitting in the front row of the prefecture on Monday. On several occasions, Bridenstine referred to the influential United States space flight leader along the lines: "Gerst will be so angry with me for saying all this." Sources told Ars that Gerstenmaier, in fact, has not yet bought any of it.

Finally, there is politics. It is unclear whether Democrats would support a policy like the one put forward by the Trump government, though in the past they have been more supportive of private space companies like SpaceX. There will certainly be opposition from top Republican senators, such as Richard Shelby of Alabama, who will oppose any attempt to set aside the SLS rocket.

For all this, however, Bridenstine reiterated Pence's line that the "ends" of reaching the Moon matter much more than the "means". And he encouraged NASA's workforce to embrace the possibility of change that would hasten what has so far been a rather slow pace in human spaceflight. "This is a big load, and comes straight from the top," said Bridenstine. "It's a once in a lifetime opportunity."