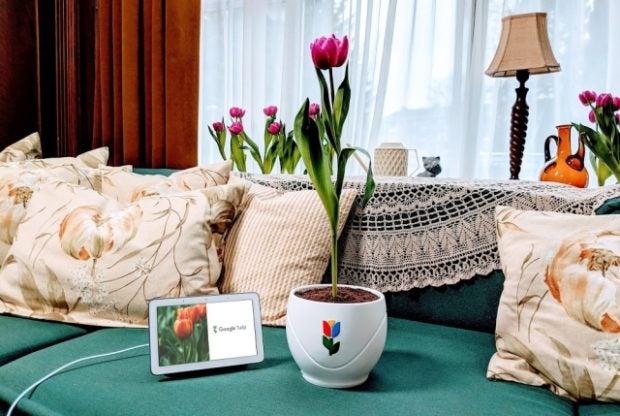 Talk to your plant with Google Tulip. Image: Google via AFP Relaxnews

Google this weekend has begun to announce new products, application tools and games too absurd to be true, but not too outrageous to be fun.

To celebrate the Day of Lies on Monday, Google led Google Home users to talk to tulips and Google Files users the ability to wipe the phone screens inside out.

Google announced on Monday that it has finally cracked the code of inter-factory communication and can now translate Tulipish into several human languages. According to the company, "the ability to talk to tulips comes with great environmental and social benefits" – instead of thinking when you should water your plant, your tulip can now say in its own language through your Google Home.

Apparently, tulips are actually very talkative, good listeners, give good advice, and ultimately make great friendships. Thanks to the development of products that occur in the Netherlands, where 12.5 billion flowers are produced each year, we can now benefit from building relationships with our tulips simply by saying "Hey, Google, talk to my tulip."

Google also announced on Monday a new feature that can be found in the Files application called Screen Cleaners that "uses geometric patterns of dirt, combined with haptic micromovement pulses, to dislodge what's stuck to your screen." The magnetic field which is produced around the device works to maintain the cleanliness of your phone. See this in action here:

Both releases came Monday alongside Snake on Google Map, which was released on Sunday in preparation for this great day of jokes. The game will last for about a week, allowing users to play the classic game on maps of San Francisco, Cairo to Sydney, and many other places. Happy April Fool's Day! CC