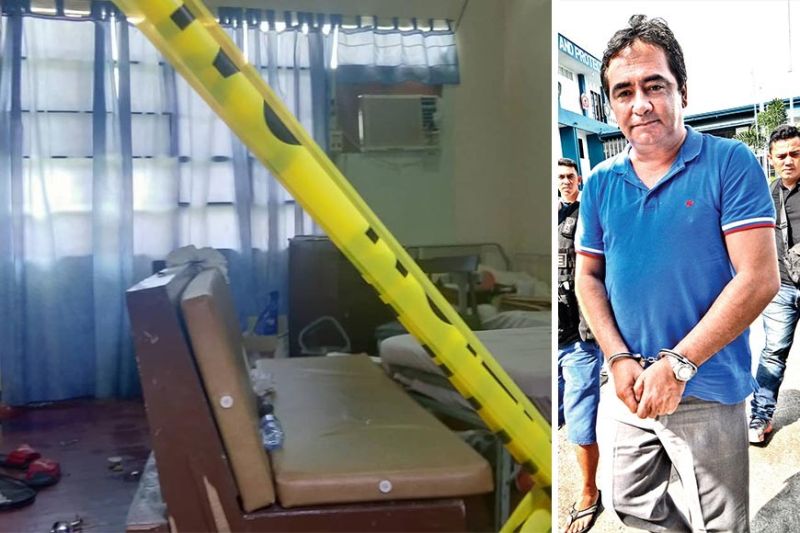 It was a crime scene that could have come straight from the longest television series on Philippine television, "Ang Probinsyano."

Police lieutenant colonel Eloveo Marquez, head of the Provincial Council for Investigation and Management of Detection (PIDMB), said that 15 armed men invaded the Bogo-Medellín Medical Center (BMMC) in Brgy. Luy-a, Medellin, Cebu aboard three SUVs and a sedan hatchback at around 11 p.m. Tuesday.

A chain guard assigned to watch Ramirez said it took only a few seconds when three armed robbers rained shots at the former mayor who had lurked inside the private bathroom of his hospital room.

Witness accounts estimate that it took only two to three minutes for the 15 gunmen to invade the hospital and kill one of Medellin's most notable personalities.

The hospital is about 2.5 kilometers from the police.

Ramirez's 55-year-old body was full of bullets when police found him in the bathroom.

An initial Medellin police investigation said that while the guard was about to surrender his post to the incoming guard, the three SUVs and the sedan hatchback entered the hospital complex.

The men then disarmed hospital guards, took their cell phones, including those of civilians outside, waiting for their sick relatives and hospital staff on duty. They told them to fall to the ground.

Eight gunmen headed to the infirmary and other offices of the hospital staff, including the pharmacy, where they also picked up the staff's cell phones and ordered them to fall to the floor.

Those who stood outside watched the perimeter and the civilians who had been instructed to fall to the ground.

The hospital's phone lines were also cut off.

Medellin police chief Audie Pelayo said four of the gunmen who went to the nursing station approached the nurse in charge to take them to room 103 where Ramirez was held in hospital for almost two years.

Inside his room, Ramirez was with the assigned chain officer for the rank of guard of the 1 Renan Pableo chain and the girlfriend of the son of Ramirez, identified as Shaira Abdul.

Pableo said that Abdul was in charge of taking care of Ramirez that night and was tasked with buying medicines that the former mayor may need.

When the armed men knocked and kicked the door, Ramirez and the girl ran into the bathroom to hide.

Pableo said two of the men were armed with high-caliber firearms, while the other two had short firearms.

One of those carrying a long gun aimed a gun at him and disarmed him. The same man also carried his backpack with his cell phone, money and other personal items.

Meanwhile, three of the gunmen went to the bathroom and pulled the girl back into the room before firing Ramirez.

(It was quick, just a few seconds.) He did not even come in for a minute, I heard shots, I think it was a gunshot of automatic weapons, magazines were emptied.)

A broken toilet bowl inside the bathroom was witnessed by the brutal murder of the former mayor, known for placing Medellin on the world tourist map. (See sidebar below)

After killing Ramirez, the suspects quickly left the hospital facility using the BMMC access road to the National Grid Corp. of the Philippines, leaving for the national road and heading straight for the southern part of Cebu province.

Medellin police investigator, Sgt. Rocelito Ortega, said 35 empty 9 mm projectiles. pistol caliber and a semi-automatic rifle of 5.56 were found at the scene of the crime.

Pableo admitted that it was only the second time he was assigned to attend the former mayor and he said the former was strictly informed not to engage in illegal drugs. He also said he did not see Ramirez while under his watch, using illegal drugs.

Medellin District Warden Chain Supt. Gil Inopia said that his men, 20 prison officers, were rearranged on their duties every 12 hours. He said that those who guarded Ramirez were not on duty all the time.

To clear questions, Pableo underwent a drug test on the morning of Wednesday, June 19, 2019 at the Municipal Health Unit. Results will be known on Thursday, June 20, 2019.

One of the motives that the Medellin police are investigating is the alleged involvement of Ramirez with illegal drugs.

But Pelayo added that they are also looking at personal rancor with their business and when he was then mayor of the city. Ramirez owns a sugar cane plantation. During his season as mayor, he was involved in alleged harassment and threatening to kill fishermen on the barangay of Gibitngil Island.

But Pelayo admitted that he had received no reports that the former mayor faced threats against his life.

They also had not monitored that Ramirez had been involved with illegal drugs in the city since he was incarcerated.

Marquez said that what happened on Tuesday night was "alarming" because of the number of suspects who carried out the attack at a hospital.

Marquez said the suspects were also totally hidden because of the caps and there were no closed-circuit television cameras (CCTV) inside and outside the hospital.

The SITG will be composed of the Medellín Police, the Philippine National Police Crime Laboratory, the Criminal Investigation and Detection Group 7 and the Cebu Provincial Police Office.

They will also coordinate with the Bureau of Jail Management and Penology (BJMP) since Ramirez was under his jurisdiction when he was murdered in hospital jail.

To remember, Ramirez was arrested in July 2017 for possession of firearms, ammunition and paraphernalia for use of unlicensed drugs at his residence in Barangay Caputatan Sur, Medellin.

Just over a month after his arrest, he was taken to Cebu Medical Hospital in August 2017 for high blood pressure.

He later was taken to the BMMC after his lawyer filed a lawsuit in court to put Ramirez under "inmate" because of his medical condition. It was granted.

In 2017, Ramirez was named by the former regional director of the Central Police Visayas Jose Mario Espino as one of the involved in the illegal drug trade.

Ramirez ran during the May 2016 election as a member of the municipal city council and won. (With SuperBalite AYB Cebu, WBS, VLA)