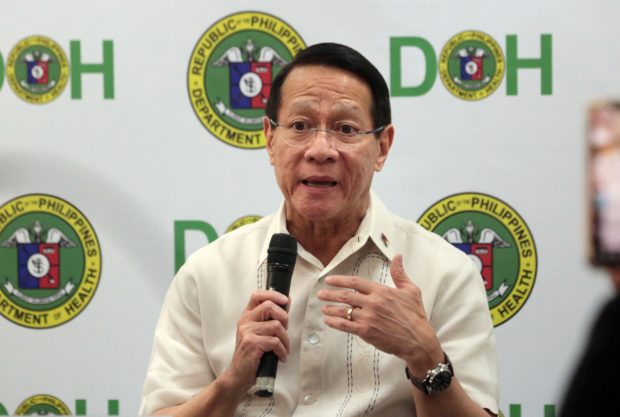 MANILA, Philippines – Health Secretary Francisco Duque has assured the public that he will cooperate with the National Bureau of Investigation (NBI) in investigating the anomaly surrounding the phantom claims of billions of pesos paid by Philippine Health Insurance Corp. (PhilHealth) to treatment centers.

Duke, who is chairman of PhilHealth's board, met personally with Justice Secretary Menardo Guevarra and NBI Director Dante Gierran on Tuesday to give his assurance.

"Sec. Duke asked the meeting to express his readiness and readiness, as President of PhilHealth, to cooperate and extend assistance to the NBI in conducting its expanded investigation of alleged phantom charges made to PhilHealth, "Guevarra said in a text message.

Guevarra said the Duke initiative is welcome because it would allow NBI researchers easy access to relevant PhilHealth documents for the controversy.

"The NBI will first examine the relevant documents regarding the payment of fraudulent claims and then determine who will be called for the investigation," he said.

Guevarra ordered the NBI to conduct an investigation based on the report that there are other clinics and hospitals as well as other PhilHealth executives involved in the alleged coup that allegedly cost the P154 billion government.

He said PhilHealth employees, led by President and CEO Roy Ferrer, who recently filed for layoffs, will be covered by the investigation.

In addition to Ferrer, the other six members of the PhilHealth Board who resigned were Jack Arroyo, elected local chief executive; Rex Maria Mendoza, independent director of the Monetary Council; Hildegardes Money from the information economy sector; Celestina Ma. Jude dela Serna, from the Filipino sector of foreign workers; Roberto Salvador of the formal economy sector; and Joan Cristine Reina Liban-Lareza, from the health sector.

"The NBI is investigating the possibility that certain PhilHealth employees might be accused of violating the Anti-Graft Act if they consciously participated in and allegedly benefited from this alleged fraud scheme," Guevarra said.

A case was filed against physician-businessman Bryan Sy for falsification and forgery of documents.

Respondents sent their attorneys to obtain copies of the complaint and were ordered to send their responses at the next hearing.

RELATED STORIES:
PhilHealth does not hesitate to fight fraud – Duke