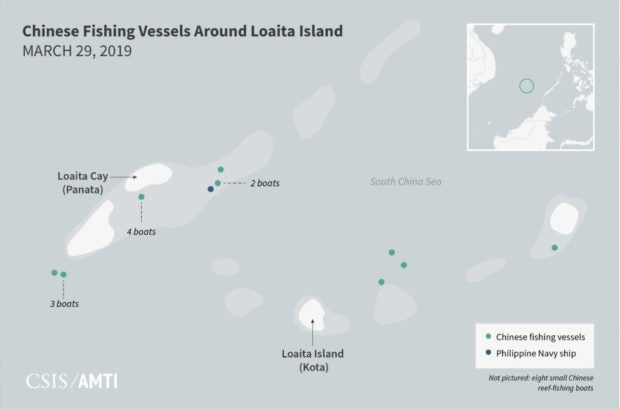 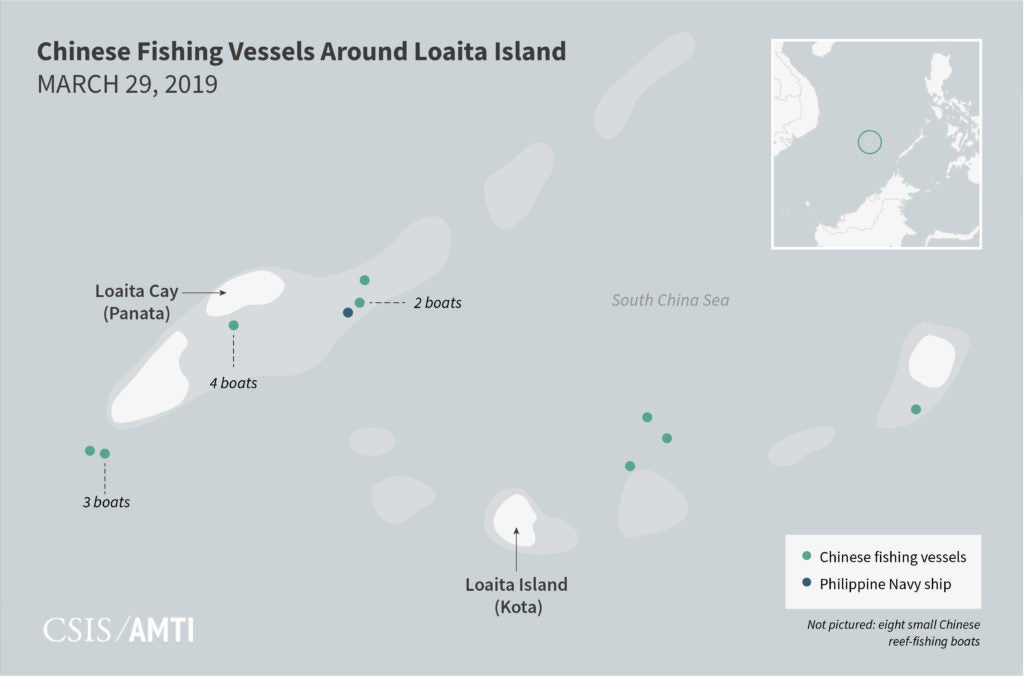 A chart provided by AMTI shows the position of Chinese vessels near or around the islands occupied by the Philippines, Panata and Kota in the Philippine Sea West on March 29, 2019. AMTI GRAPHICS

MANILA, Philippines – After invading Pag-asa in the Kalayaan Island Group, Chinese ships believed to be part of the Chinese maritime militia were seen near two other islands occupied by the Philippines in the South China Sea.

Some Chinese ships and boats were seen about 1 km from Kota (Loaita) and Panata (Loaita Cay), about 24 km south of the island of Pag-asa (Thitu), the largest of the nine islands and restingas occupied by Filipinos the Spratly Island Island chain, according to the Asia Maritime Transparency Institute (Amti).

"Satellite images collected on 12, 16 and 29 March and 7 April confirm the presence of Chinese ships in the area, most of which show all indications of belonging to the maritime militia," Amti reported on Tuesday.

"In almost all cases, ships are anchored, many in large groups and without fishing equipment in the water," he noted.

The government protested against the presence of at least 275 Chinese vessels, mostly from China's maritime militia, during the first three months of the year near Pag-asa and three sandbars near the island where the military was working to rehabilitate its facilities .

In a statement in early April, the Department of Foreign Affairs (DFA) said that the presence of Chinese vessels "in large numbers and for sustained and recurring periods, what is commonly called the" swarm " tactical "raised questions and concerns about his intention. and their role in supporting "coercive goals".

On Tuesday, he reported that some of the ships were only 1 km away from Panata, "considerably closer than Amti has seen militia ships approaching other facilities of a country before."

"This should be particularly provocative for the Philippine detachment on the cay, which probably depends on frequent replenishment and relief from those on Loaita Island," he said.

He noted that Panata had been erroneously called Lankiam Cay on Philippine maps.

A satellite photo showed a 50-meter Chinese fishing trawler near Kota on March 12. Four days later, there were eight. On March 29, at least 15 large Chinese fishing vessels and eight small boats were seen.

Not involved in trawling

Some of the ships were only 3.7 kilometers from Kota, but most were around Panata, Amti said.

"None of them were involved in trawling or appeared to have fishing equipment installed," he said.

Deputy Admiral Rene Medina, chief of the Western Command, confirmed the presence of Chinese vessels on the two islands.

"They move from one place to another," Medina told reporters on Tuesday.

DFA did not comment on the last reported presence of Chinese vessels near the two islands occupied by the Philippines.

Manila has made a diplomatic protest with Beijing over alleged Chinese hunters who have reaped endangered giant mollusks and destroyed corals at the Panatag Shoal, a traditional Philippine fishing field 230 km west of Zambales province that was captured by Chinese forces in 2012.

"The Chinese (government) are not protecting the Chinese fishermen who happen to be in training, okay? This is militia and hunters acting in unison. Period. We're not stupid or blind, "he tweeted on Wednesday.

Manila was waiting for Beijing's response to the protest against the harvest of giant mollusks, according to presidential spokesman Salvador Panelo.

"Maybe if they do not respond in the affirmative, then we have to do something more aggressive that can trigger, as I said, armed hostilities," he said in an interview with ABS-CBN.

He said the Philippines did not want any armed conflict with China and that negotiations were still "the best" option to resolve the maritime dispute.

"We can still talk about it. We can tell them, "Stop doing that," he said.

"Otherwise, we will be forced to risk an armed conflict, if at all," he added.