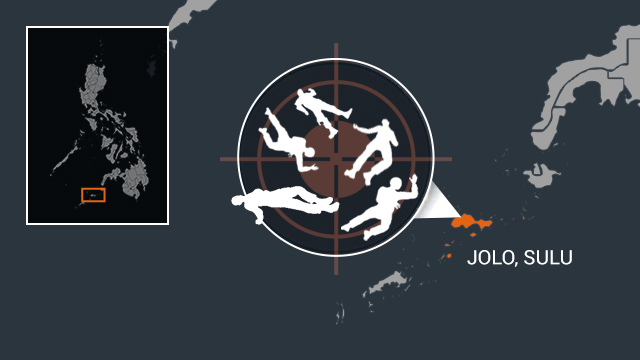 Abu Sayyaf is believed to have "less than 10" hostages, according to the military

DEAD 5 Filipino soldiers were killed on November 16, 2018, in Jolo, Sulu, while they were rescuing hostages from the Abu Sayyaf terrorist group.

MANILA, Philippines – The Philippines Armed Forces (AFP) said on Saturday, November 17, that five soldiers were killed and 23 others wounded as troops attempted to rescue hostages from the Abu Sayyaf terrorist group.

Soldiers were searching for hostages by the Abu Sayyaf group when gunmen attacked them on the island of Jolo, Sulu, on Friday, Nov. 16, Lt. Col. Gerry Besana, a regional spokesman, told reporters .

"The effort is part of our mission to rescue the remaining hostages," Besana said.

Friday's clash was one of the deadliest since a Abu Sayyaf faction joined the Maute group in seizing the city of Marawi in 2017, leading to a five-month battle that cost more than 1,100 lives.

It is believed that Abu Sayyaf has "less than 10" hostages, Besana said.

Soldiers who survived the ambush on Friday saw no hostages during the 90-minute confrontation near the town of Patikul, Besana said.

Abu Sayyaf began in 2016 to kidnap sailors in the waters between Indonesia, Malaysia and the Philippines.

The terrorists also invaded and held hostages in resorts in the southern Philippines and neighboring Malaysia.

Most of the hostages were rescued by huge sums of money and several were beheaded, including two Canadian tourists in 2016. A Dutch birdwatcher abducted on a nearby island in 2012 is believed to be among those still in the hands of Abu Sayyaf .

The Dutchman's Swiss colleague escaped in 2014 after taking the knife from a kidnapper and killing him. – Rappler.com