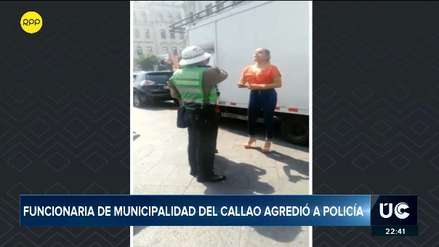 The Public Prosecutor's Office interior Ministery (Mininter) will report criminally Patricia Marisol Star Tisnado for the crime of disobeying the authority for verbally assaulting a police officer, the institution said.

The woman, who works as an Municipality of Callaoinsulted the traffic officer who intervened, after the vehicle in which he traveled crashed. With offenses and screams, you see how he tries to discredit the money.

"Look, you do not recommend stupid things … Do not lower your voice, you're not talking to anyone, you can not stop me, you're crazy. Who will you be, misplaced? Fleay, disgusting, what will you believe, where did you study? Of course the police officer is, he's a bastard."shouted the woman in Plaza San Martín, in the center of Lima.

Although another agent tried to calm her down, she continued to insult him: "I am also an authority, stay away, man and spoiled, who you won, what you studied, what did you do? Do not disrespect me again, you disgusting fifth cop. You're not a cop, you're a jerk, you're a jerk."

Only then Patricia Estrella Tisnado He finishes his assaults, turns and leaves. At all times the police remained unchanged and did not respond to swearing; at the end of the recording, he tells the woman and her escort to accompany him to the police station.